Accident Help (Home) » Injury Blog » Motorcycle Bias in Florida: What to Do to Win Your Injury Case 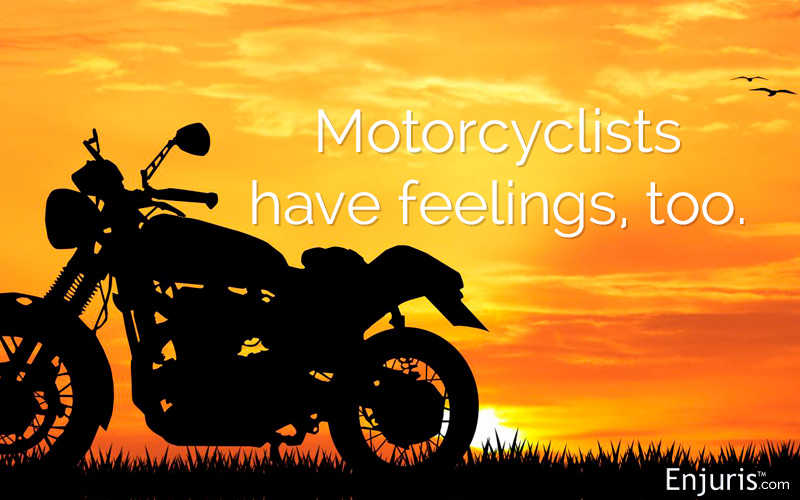 Riding a motorcycle is inherently more dangerous than driving a car. The National Highway Traffic Safety Administration (NHTSA) reports that motorcyclists are 28 times as likely as passenger car occupants to die in a motor vehicle crash.

By nature, a motorcycle is less crashworthy because the rider is exposed to impact from other vehicles or the road, as opposed to being in a car with a “cage” that provides some protection.

But what about legal protection?

Many motorcyclists believe that everyone involved in a motorcycle accident — from the other drivers to the responding police officers — is biased to think that an accident is always the fault of the motorcyclist, even when this clearly isn’t the case.

Any driver, whether you’re operating a car, truck, or motorcycle, should do the following to help prevent accidents of all kinds:

Why are police and other drivers biased against motorcyclists?

Table of Contents + show
Why are police and other drivers biased against motorcyclists?
How to combat bias as a motorcycle rider (5 tips)
Call a motorcycle accident lawyer before speaking with your insurance adjuster

There seems to be a perception that a motorcyclist is going to take more risks than a car driver, or that they’re going to be less responsible on the road.

Yes, there are some motorcyclists who are risk-takers and who speed, weave, and drive irresponsibly. But so do some car drivers. Most motorcyclists simply enjoy the experience of riding and want to get to their destination safely.

So how does bias play out for motorcyclists after a crash?

When it comes to a motorcycle accident lawsuit, stigma may result in several negative outcomes:

If you’ve been in an accident as a car driver, you might have to explain how the crash occurred and what caused it. But there’s no presumption that you were driving recklessly unless evidence from the scene shows that you were.

If you were in an accident as a motorcyclist, however, you might automatically be put on the defensive and be presumed to have been driving recklessly, unless the evidence can show that you weren’t.

It’s similar to the legal concept of presumption of innocence. Most of us have seen enough legal dramas on TV to know that a defendant is innocent until proven guilty in a criminal case. Shouldn’t it be the same at the scene of an accident?

In a motor vehicle accident, there’s usually no innocent or guilty. Civil (non-criminal) lawsuits rely on the principle of liability, or fault. The reasonable person standard means that a driver’s actions were reasonable based on what the average person would do in that situation.

Every driver on the road has a duty to drive responsibly and carefully — whether you drive a motorcycle, car or truck.

How to combat bias as a motorcycle rider (5 tips)

If you’re in an accident while riding a motorcycle, there are some steps you can take right now to build your credibility and crush the stigma:

Along those lines, make it your habit to ride carefully and respectfully all the time while on your bike. Building a history as a good driver can help you if you ever end up in court. Don’t rack up speeding tickets or other violations. If you do wind up in court and have a squeaky-clean driving record, that will work to your advantage. If every motorcyclist rides responsibly and carefully, it also builds the public’s goodwill, and over time it could even break down some of the bias we see today.

Call a motorcycle accident lawyer before speaking with your insurance adjuster

After you or the other driver report the collision to the insurance companies, you’ll certainly get a call from your adjuster (or the other driver’s), but you’re not required to talk with them. Sometimes, an insurance adjuster uses tricky tactics to get you to admit fault in an accident.

The first step you should take is to look for an experienced motorcycle accident lawyer who knows how to combat bias by taking a deep dive into police reports, witness accounts, and other evidence to see what really happened and not just want the insurers think happened.

Have you experienced bias as a motorcyclists? Share your story in the comments below.