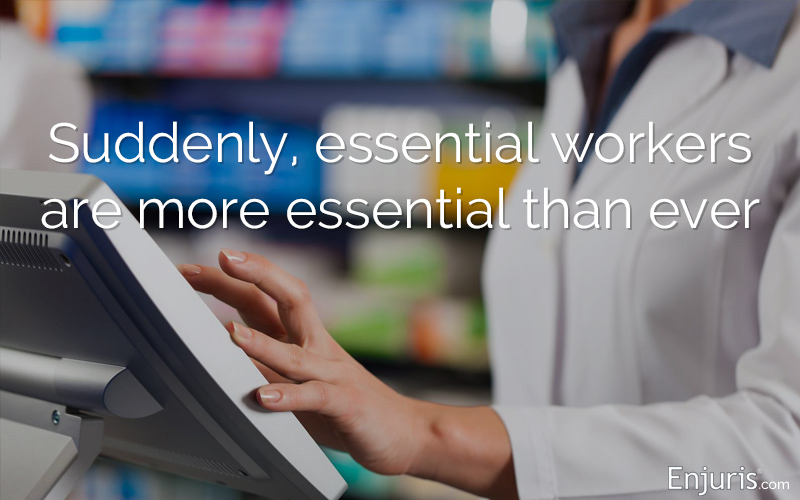 If you worked at your job, facing the public, throughout the pandemic, chances are you’re an essential frontline worker who deserves to be compensated

Table of Contents + show
If you worked at your job, facing the public, throughout the pandemic, chances are you’re an essential frontline worker who deserves to be compensated
Who are frontline workers?
COVID-19 and hazard pay
Doesn’t workers’ compensation help?
So where are we now?
Hazard pay isn’t traditionally well defined, nor is who qualifies as an essential or frontline worker. The pandemic has changed almost everything about how we live and work. But millions of people continue to go to work every day, interact with the public, and face the health risks involved. Some of their employers are providing hazard pay — but not all of them.

Hazard pay used to be for workers whose jobs were especially dangerous. This might have included professions like mining, construction, military, or other jobs that would involve specific physical hardship. Physical hardship would include work tasks that could cause extreme physical discomfort or distress that isn’t adequately alleviated by protective devices, according to the U.S. Department of Labor.

But then COVID-19 happened.

Suddenly, the definition of what it meant to be a frontline worker changed, along with whose jobs were considered dangerous when they hadn’t fallen into that category before. People like grocery store workers, bus drivers and other public transit employees, warehouse staff, food distributors, health care workers, and other essential employees were suddenly exposed to a new virus with potentially deadly consequences.

In early 2020, information was just beginning to emerge about how the virus could spread, who was most susceptible, and what the symptoms, complications, and after-effects could be.

Today, we know much more about how COVID-19 is spread and how people are affected, and in what settings. In the early days of the pandemic, officials said that the key to prevention was remaining separate from other people — in other words, staying home and limiting interactions to people with whom you live. Schools and businesses shut down, and many people began to work from home rather than reporting to their offices.

But an estimated 50 million Americans remained at work as frontline workers in essential jobs.

Facing factsOf 808 occupations with data available to the Bureau of Labor Statistics, an average of 3.9% of frontline workers could do their jobs from home, as compared to 64% of other essential workers. (source)

Who are frontline workers?

In 2018 (pre-pandemic), the 10 largest categories of frontline occupations were defined as:

Hazard pay isn’t a new concept, but it has broadened and evolved since COVID-19 began to threaten workers’ health and livelihood.

In the early months of the pandemic, a survey of members of the American workforce indicated that more than 75 percent of the people surveyed supported adding hazard pay or raising wages for workers in essential jobs. Many frontline workers also agree that they should get additional pay after being present and in person at their jobs during 2020 and 2021.

People like grocery store cashiers, who wouldn’t have thought of themselves as putting their lives on the line each day at work before the pandemic, would walk into their stores each day with a foreboding feeling.

The survey also interviewed people like a Virginia cashier who said that she would wonder each day if that would be the day she’d catch covid at work.

Other people, like one who was working in a poultry plant, say he worked with 600 people on a shift in a packed environment. He spent his time hoping that the person next to him wasn’t infected with the virus. This worker said employees at his plant in Virginia were earning about $12-$14 per hour.

Yet another worker — a 60-year-old home health aide in Philadelphia  — is the sole provider for her family of 7 after 2 of her children lost their jobs during the pandemic. She has underlying health conditions that make her high risk for COVID-19, and she skips medicine and healthy food in order to make her money last longer and supplies stretch further for her family.

Suggestions for compensating these frontline workers include either raising workers’ wages by a few dollars an hour or adding additional “bonus” money as hazard pay.

Hazard pay is seen as a way to correct financial injustices suffered by frontline essential workers. These people risk their lives — and sometimes the lives of their families — to continue to provide goods and services that the community relies on.

Every state has a workers’ compensation system to provide benefits to people who are injured or become ill at work. States vary with respect to the amounts of benefits and specific coverage, but the purpose is the same:

Workers’ compensation insurance is a no-fault program that benefits both employees and employers.

The employee receives benefits if they’ve been injured or become ill at work. They don’t need to prove fault; they only need to show that the accident or cause of the illness happened while they were completing job-related tasks.

The employer benefits, too, because a workers’ compensation claim means the employee cannot sue the employer for liability as a result of the accident or illness. This saves the employer from spending time and money defending a lawsuit.

However, it has historically been difficult for employees to receive workers’ compensation benefits because of COVID-19 exposure at work. The reason is that it’s nearly impossible to prove that the exposure happened in the workplace. Once the virus became widespread, and it became known that it spreads so easily through respiratory droplets that can be present in the air, a worker wouldn’t be likely to prove that they contracted it at work — even if they were in no other places than work and home, traveling in their own vehicle, and they live alone. There are simply too many unknowns.

That means a lot of workers had to take time off from work — losing wages — after contracting COVID-19, or because of mandated quarantines. And, of course, they would need to pay (or hope that their health insurance covers) for any medical treatment or hospital stays during their illness.

So where are we now?

Individual employers would need to choose to provide hazard pay for their employees. However, some state and local lawmakers are also able to offer some additional benefits to companies for workers through the American Rescue Plan Act, which was signed into law in March 2021.

This includes $350 billion in direct relief to state and local governments. They can then take a portion of the funding and provide hazard pay to workers. Pennsylvania, Vermont, Louisiana, Michigan, Virginia, and New Hampshire have already begun to do so.

President Biden has asked for employers to provide back hazard pay to frontline essential workers, though that’s not the usual objective of providing hazard pay. Normally, its purpose is to provide additional wages to workers who stay at their jobs during a crisis like the COVID-19 pandemic.

Still, some cities and states have provided hazard pay to their workers for various reasons.

For instance, Seattle provided hazard pay to grocery store workers. Maryland proposed hazard pay for all essential workers. In most areas, the details about hazard pay are still being explored and it is still working its way through the legislative process.

Depending on where you live, eligibility for hazard pay varies.

Maryland has one of the most comprehensive hazard pay proposals. It covers more than 14 industries, which would include 25 to 35 percent of the labor force. Workers from eligible industries who make less than $100,000 per year would be eligible for $3 per hour in hazard pay. This could total $238 billion for one year. (source)

Of the nation’s 300 largest employers, here’s how things have changed during the pandemic:

We’re all hoping for things to return to “normal” sooner rather than later, though it’s certain that the “new normal” won’t be exactly the same as how things were before the pandemic.

But hopefully, we’re learning lessons about how employees need to be compensated, who essential workers really are, and how to keep ourselves safe — because there’s always the possibility of another health, environmental, or other crisis that will cause us to redefine hazard pay and frontline workers yet again.

Still not finding what you need?
Check out our other articles on workplace injuries
Downloads:
Free personal injury guides for download to print or save. View all downloads.
Tell your story:
Tell your story - What would you want others to know? Tell us what happened in your accident, and how life has changed for you.
Find an attorney:
Search our directory for personal injury law firms.
See our guide Choosing a personal injury attorney.