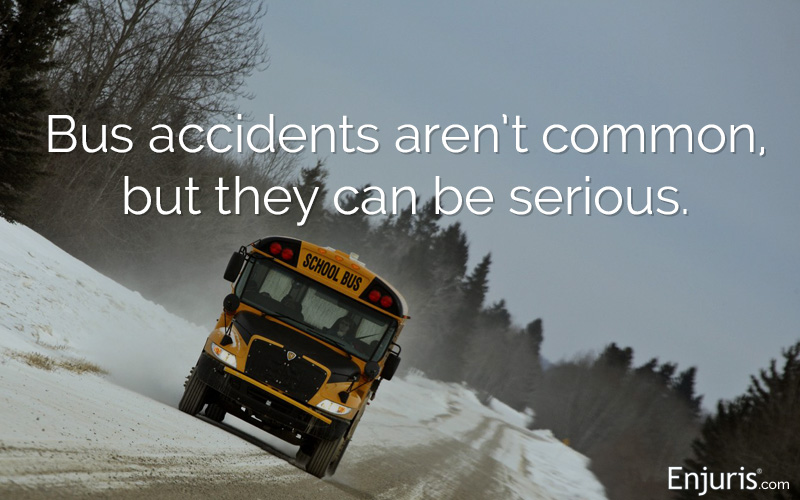 Almost everyone has ridden a bus at one time or another. Whether it was a school bus you rode as a child, a public commuter bus or you’ve ridden a bus for long-distance travel, it’s likely that you’ve been a bus passenger at some time.

Riding a bus is usually pretty uneventful... it’s unlikely to be anything like the movie Speed with Keanu Reeves and Sandra Bullock where the bus can’t drive fewer than 50 miles per hour, and also unlikely to be like the bus in Pitch Perfect, where the a cappella team breaks into song along a deserted highway. Lots of people love the bus because it offers affordable transportation that allows you to “check out” and not have to drive — you can read, relax, or nap while someone else takes care of getting you to your destination.

However, sometimes accidents or injuries happen, and you could be entitled to compensation if you are injured as a result.

How you pursue financial compensation for your injuries depends on which of these categories you’re in and how the accident happened.

The main premise of personal injury lawsuits is that they make the plaintiff (injured person) financially whole. In other words, the legal system seeks to restore a person to the financial position they would be in if the accident hadn’t happened.

The way the courts do this is by awarding compensation to the injured person to cover expenses that include:

However, arguably the most important part of determining whether you’re able to receive compensation is figuring out who was liable, or at fault.

Who are the defendants in a bus accident lawsuit?

In a bus accident, determining who the defendants are can be complicated because they could include government agencies, large companies, the bus manufacturer, or several other parties. Unlike a “regular” car accident, which often involves just 2 drivers, a bus accident could have several defendants.

Here are some examples of who might be liable for a bus accident (and how):

Enjuris tip:In Wisconsin, a local government is shielded from personal injury liability for discretionary acts of employees. However, this is complicated and there are exceptions. If you’re in an accident caused by the driver of a bus owned by a government agency, you should contact a Wisconsin personal injury lawyer for additional guidance.

Who are the plaintiffs in a bus accident?

This seems like a silly question, particularly if the plaintiff is... you.

But to really understand how bus accidents happen, it’s also important to look at who could potentially become injured on or around a bus:

However, like with any moving vehicle, there is a possibility of being involved in a bus accident. There are a few ways you could be injured in a Wisconsin bus accident:

We’ll take a look at each of these categories separately and see how you might pursue a bus accident claim, depending on your involvement.

Bus accidents with pedestrians, bicyclists, or other road users (including bystanders)

Real Life Example:On Oct. 10, 2021, a pedestrian was struck by a Milwaukee County Transit System bus in West Allis near the intersection of 70th and Greenfield. The person was walking northbound in the intersection at 92nd when he was hit. Surprisingly, he was taken to the hospital with only “minor” injuries.

While there is no publicly available information on the outcome of this incident, it’s one example of how pedestrian/bus accidents happen. We know that it was dark at the time, but the outcome of a legal claim (if one is filed) would be based on the evidence discovered by the involved parties’ lawyers.

What will be important in this case and others like it is establishing fault.

Wisconsin follows a modified comparative fault (51% rule) system. In Wisconsin, if the plaintiff is 51% or more liable for the accident, they cannot recover any damages.

If a plaintiff is partially responsible for the accident, their damage award would be reduced by the amount for which they are at fault. This applies whether the plaintiff is a pedestrian, bicyclist, or anyone else.

Bus accidents with other vehicles

If you’re the driver or occupant of a car or truck and you’re involved in a collision with a bus, the same rules apply. If you’re at fault for less than 51% of the accident, you can claim damages with a deduction for your portion of fault (if any).

You generally have these options for making a claim against the at-fault party:

There are several ways you could be injured in a bus accident as a passenger, and many don’t involve a crash.

Certainly, there are instances where buses are involved in crashes, off-road accidents, low bridge clearance accidents, or other situations where a passenger could become injured. But often, injuries happen as trip- or slip-and-fall accidents on and off the bus or in the aisles, bumps to the head or extremities, or other types of similar injuries.

Wisconsin’s modified comparative fault rule would apply in this situation, too. If you’re “just” a passenger who is seated and the bus crashes, there’s likely no way for you to be liable. But if you trip and fall, the court might look at whether you had any liability — like if you were wearing shoes with high heels or slipper soles, or if you were carrying heavy luggage, or things like that.

Along those same lines, if you are crossing the street to board or leave a bus, or you’re running to catch the bus, or any other activity associated with becoming a bus passenger, an injury would be considered a bus accident even if you weren’t actually on the bus at the time.

If you are a full-time or part-time employee of a bus company, you’re a school district bus driver, or you’re employed by a municipality as a bus driver, then you may be eligible to receive benefits from workers’ comp insurance that include:

School buses are designed and built to keep children safe. A school bus distributes crash force differently from cars or trucks. The seats on a school bus provide “compartmentalization,” which protects passengers in the absence of seat belts. The bus seats are strong, closely spaced, and include energy-absorbing seat backs.

Real Life Example:On Friday, October 1, 2011, an accident involving a school bus and a car sent 2 people to the hospital. The crash involved a Stanley-Boyd School District bus and a car in the Town of Edson.

The Chippewa County Sheriff’s Office reported that the driver of the car was cited for failure to yield at a stop sign. None of the 26 bus occupants were injured, but the 2 occupants of the car were transported to the hospital for serious injuries.

If an accident happens involving a school bus, the same rules apply regarding liability for any other type of bus accident in Wisconsin. However, there are special traffic laws that apply to school buses.

The Wisconsin DOT has shared these rules for passing a stopped school bus:

Drivers must stop on the street or highway 20 feet or more from any school bus that has stopped and is flashing red warning lights.

Sometimes, the bus signals are only yellow lights (not red) so motorists should be aware of the laws wherever they’re driving.

A bus accident can happen in a variety of ways, but here are some of the most common causes:

If you or a loved one were seriously injured in a Wisconsin bus accident, we recommend contacting a personal injury lawyer for help and advice. A knowledgeable attorney can help you navigate the legal system and recover the compensation you need to cover your accident-related costs.

Need legal advice? You can start by visiting the free Enjuris law firm directory to find a Wisconsin bus accident lawyer nearby.