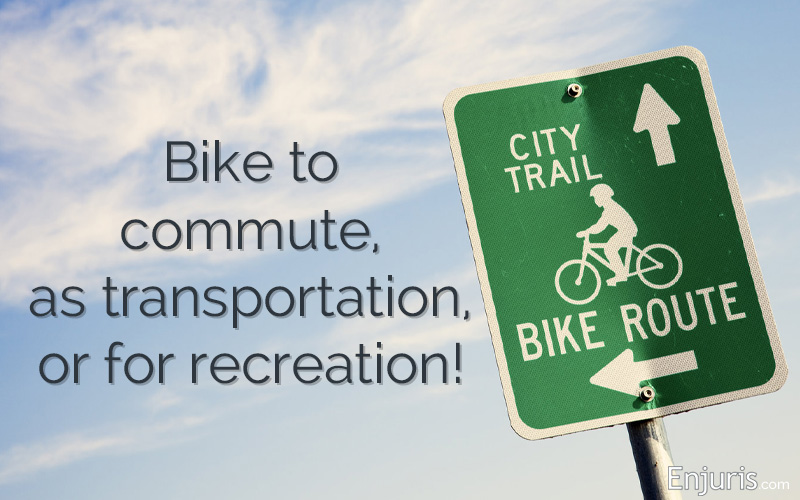 Who is liable for your bicycle accident injury?

Wisconsin is a great place to bike.

Just ask a cyclist who has pedaled their way along thousands of miles of road or multi-use trails. The Badger State is home to the nation’s first railroad-converted trail, which coasts through historic tunnels and 5 communities. There are also more than 200 miles of gravel routes through the Chequamegon-Nicolet National Forest.

Cities like Madison have been designated as Bicycle Friendly Communities, and Sparta is known as the “Bicycling Capital of America” according to Travel Wisconsin. You can also ride U.S. Route 30/230 across the entire state — all 269 miles! — from Lake Michigan in Milwaukee to just north of La Crosse along the Mississippi River.

Regardless of all of these options for recreational “adventure” cycling, there are still many people who are bicycling as their commute to work, as casual cyclists in their own neighborhoods and communities, or as transportation for errands and short-distance trips near their homes or workplaces.

While biking is fun, environmentally friendly, and healthy, it can also be dangerous. Many bike accidents result in serious injuries and death.

Here’s a look at injuries and fatalities resulting from Wisconsin bike accidents in recent years:

Looking more closely at the numbers, here’s the average over the period 2015-2020 for each of these categories of accidents:

Liability for a bike accident

Wisconsin is an at-fault liability state, which means the person who causes an accident is responsible for the costs related to the other person’s injuries.

Most of us probably think first about car-bike collisions with regard to bike injuries and accidents and that’s a valid concern. Lots of Wisconsin bike injuries are because a vehicle hit a bicyclist (or vice versa).

But there are other types of accidents that happen, too.

There are 2 common types of bicycle accident lawsuits:

A premises liability claim is for an injury that happened because of a hazardous condition on property. For example, you could get hurt because your bike hit a pothole or other hazard in the road, the traffic lights or signals were obscured and you rode off the roadway, or you collided with a pedestrian or stationary object.

In order to file a lawsuit, the accident has to be because the person or agency in charge of maintaining the property was negligent, and that negligence was the cause of your injury. In other words, if you fall off your bike because you lost your balance, or if you went off the road and hit a tree because you weren’t paying attention, that’s not someone else’s fault. It might not be your fault either, per se, but it could be a pure accident.

However, if you lost your balance because there was slick sand dumped in a parking lot that didn’t belong there and you slid, that could be negligence on the part of the property owner (provided the parking lot was a place where you were legally permitted to be and permitted to ride a bike).

A potentially complicating factor for a premises liability lawsuit for a bike injury is if the entity that maintains the property is a government agency. If you’re riding your bike on a public road or trail, it’s maintained by a government agency. In such cases, the challenge could be figuring out which agency or municipality is responsible. Some roads are maintained by the state government, others by county or municipality governments.

Once you’ve learned who is responsible for the area, you then have 4 months to file a claim against the appropriate government agency. You’ll also need to provide notice to the state attorney general that you intend to file a lawsuit, and that needs to be done within 120 days from the date of your injury.

Liability for a bike-car collision

In most instances of a crash involving a car and a bicyclist, the bicyclist ends up with more serious injuries than the driver. As we know, the driver or any vehicle occupant is more protected because they’re contained within a vehicle that’s designed to absorb impact. They also could be wearing a seatbelt and their airbags could deploy if it’s a serious accident.

By contrast, the bicyclist can easily be thrown from the bike and has no protection (other than their helmet). And, of course, there’s no contest between the size, weight, and usually speed of a car as compared to a bike.

Because the bicyclist tends to bear the brunt of physical injuries, sometimes there’s a bias that the car driver is always liable or at fault for a crash, but that’s not necessarily true.

The bicyclist can be liable, too.

There are plenty of ways that a bicyclist can cause an accident — for instance, if they turn without using proper hand signals, fail to stop at a red light or stop sign, are texting or using their phone while riding, or traveling at a high enough speed that they can’t stop fast enough if they need to.

If the driver is at fault for the accident, the bicyclist can recover compensation in a few ways:

Each state follows 1 of 4 methods for determining how much is awarded in damages if a plaintiff (the injured person) shares a portion of fault for the accident. In Wisconsin, if the plaintiff is 51% or more liable for the accident, they cannot recover any damages.

If a plaintiff is partially responsible for the accident, their damage award would be reduced by the amount for which they are at fault.

Here’s an example of how Wisconsin’s modified comparative fault rule might work in a bicycle accident:

Bicyclist Jed was riding his bike on a quiet road in Madison in the early morning hours, just before sunrise.

Driver Leo was approaching from the rear and driving cautiously. However, just as he was within about 50 feet from Jed, Leo’s phone buzzed and he took his eyes off the road for a moment to see his phone notification.

Jed was riding close to the shoulder, but was still in Leo’s path. Leo hadn’t seen Jed before he took his eyes off the road, and when he looked up again, he saw the bicyclist but it was too late to stop or swerve to avoid hitting him. Jed saw the car’s lights when they were immediately behind him but it was also too late for him to avoid being hit. Leo’s car hit Jed’s rear tire enough that Jed’s bike veered off the road and he was injured when he hit a tree.

While it would seem obvious that Leo was at fault for the accident and Jed’s injuries, there was one detail that later came out at the personal injury lawsuit trial... Jed’s bike was not equipped with the correct lights and reflectors, as required by Wisconsin state law.

Wisconsin statute §347.489(1) says that a bicycle must have a red reflector on the rear that is visible from 50 to 500 feet away. If there is no reflector, the bike must have a lamp with a steady or flashing red light.

The jury decided that although Leo caused the accident, Jed was partially responsible. If he had the proper lighting on his bicycle as required by law, then Leo would have been able to see the bike sooner and might have been able to avoid a crash.

In the scenario described above, Jed would not recover any damages for his injuries if he is 51% liable or more for the accident. If he is 50% liable or less, he can recover damages that would be reduced according to his percentage of fault.

In addition to staying safe while bicycling, following Wisconsin bike laws and road rules also protects you from being liable in a crash.

Here are some of the applicable Wisconsin rules:

Enjuris tip:Even though some behaviors are not specifically illegal in Wisconsin (like biking and texting or biking under the influence of alcohol), they could affect the outcome of a legal claim. If you were in a crash while engaging in these actions, it’s likely that you would be found partially liable, and that would reduce the amount of compensation you can receive.

Although some accidents are outside of the bicyclist’s control, there are ways to keep yourself safer on the roads.

Here’s a look at the 5 most common causes of bike accidents:

Distracted bicycling is a big problem, just like distracted driving.

We’ve all become so attached to our phones and devices that the temptation to use electronics, even while biking, is a strong one. It’s always dangerous to look at your phone or device while cycling because taking your eyes (and mind) off the road and any oncoming traffic, even for a moment, can be a tragic decision.

Enjuris tip:If you’re riding a bicycle, use only 1 earbud or AirPod (if you must use it at all) and always keep the other ear “free” so you can hear traffic or other signals around you as you ride.

Like drivers, cyclists should ride in a way that allows them to be in control of their bikes at all times. A safe speed will depend on road conditions, weather, amount of travel, speed of vehicle traffic, and other factors.

Although it’s the driver’s responsibility to maintain a 3-foot safe passing distance when they approach a bicyclist, sometimes it’s the cyclist who approaches from the rear. You should always make it a point to leave plenty of room between you and the nearest vehicle.

Enjuris tip:This is also why you should be familiar with the standard recognized hand signals for bicycling and use them when you are riding in traffic. Here’s a guide to bike signals from the National Highway Traffic Safety Administration (NHTSA).

Some drivers (and bicyclists) think that because cars tend to move more slowly in parking lots or when backing in or out of a driveway, those areas aren’t dangerous. But because these scenarios often involve backing up and unexpected movement, they can present risks.

What to do after a bike accident in Wisconsin

If you’re able to do so, take these steps after a bike accident:

If you have injuries that weren’t covered by insurance, or that are severe and will require future medical treatment or have ongoing expenses, it’s important to consult with a lawyer before accepting an insurance settlement. Your lawyer will assess the full value of your claim and costs of your injuries in order for you to recover the correct amount to cover your expenses.