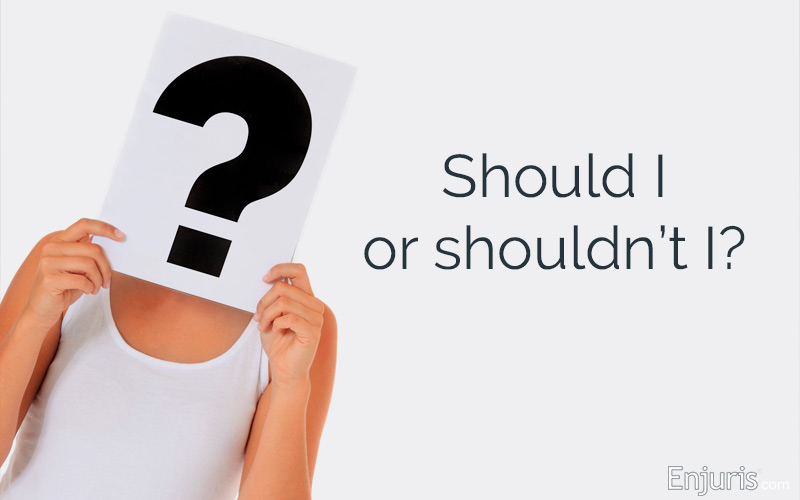 A fender bender can leave you annoyed at its inconvenience, but ultimately uninjured. If you accidentally rear-ended someone with just a little tap, or you had a collision that left one or both vehicles with only a small dent or scrape, is it really worth it to go through your insurance company, or is it easier to settle the claim on your own?

You sometimes can settle a car accident without insurance. But should you?

We’ll take a look at what to do if you’re thinking about settling without insurance, and what the risks and benefits could be.

When to consider settling without insurance

Only consider a private settlement if the accident is minor. Unfortunately, sometimes what appears to be “minor” is actually more serious than you think. What looks like a ding in a bumper could involve damages underneath that are only visible once the mechanic performs an examination.

Probably the most important part of dealing with a car accident privately is that both parties need to be in agreement. If the other driver is more comfortable making a claim to insurance, you need to make sure you’re reporting it to your insurance company, too. The other driver is entitled to handle it that way if that’s their preference — but if it really is something small like a broken taillight, maybe you can convince them that a direct payment will be easier for everyone.

You can make a report to your insurance company that the collision happened without filing a claim. Some insurance companies require it. If you don’t report it and the other driver does eventually file a claim, it could become more complicated for you.

This factor is important, though:

Some insurance companies keep records of inquiries and reports, and it could affect your insurance premium rate even if you never file a claim.

How to settle without insurance

If you’re intent on settling without insurance, here are 5 steps you must take in order to protect yourself in the process:

Here’s the gamble you take when you agree to settle without insurance:

Your insurance company likely requires a report of an accident to be made within a short period of time. Those time periods vary by company, but it could be as little as a day or two. Remember, making a report is not the same as filing a claim.

You could decide to settle without insurance and not report the collision, but then if your negotiations for a settlement fail, you’ve lost the ability to go through insurance. If that happens, the only option left is a lawsuit and that could leave you in a worse position than you’d have been in if a claim was made against your insurance.

Enjuris tip: A minor cannot sign a legally binding agreement. If one of the parties involved in the accident is under 18 years old, their parent or legal guardian would need to sign any legal document.

Should I handle my accident without insurance?

There are a lot of considerations when figuring out how you’re going to handle a car accident. But you do have some time to think it through.

If you can avoid the insurance company, you don’t have to worry about your premium rate increasing if you were at fault for the accident. That’s usually what most people who settle privately are aiming to avoid — each time you’re at fault for an accident, your insurance goes up a higher percentage. And, if it happens too often, you could become uninsurable. An accident claim could result in a rate increase of 20 to 40 percent.

An insurance carrier often uses a driving violation as justification for raising your premium rate. If you’ve had several claims, traffic tickets, or accidents in the past 3 years, you’re likely to see an increase in your insurance rate.

If you and the other driver agree to settle without insurance and then the damages are more money than you thought, it could be too late to file an insurance claim if the accident wasn’t reported. What appears to be a small amount of damage could amount to thousands of dollars that you’d then need to pay out of pocket.

Using insurance rather than dealing with a car accident privately can save you a lot of headaches. You never know what the other driver is going to do once you leave the scene. They might go home, speak with a spouse or friend, and then decide that they want more money than you think is fair.

Enjuris tip: If it’s a single-car accident and involves only damage to your own car, get an estimate from a collision shop. If the cost to repair is less than your deductible, it makes sense to pay out of pocket.

Almost every state requires you to report the accident if there’s any personal injury. Although the accident might seem minor, if the occupant of any involved vehicle suddenly feels a twinge in their neck or a cramp in their back, the accident must be reported.

Remember, you don’t want to get into legal trouble because you decided to save a little money on insurance. Yes, insurance coverage can be costly, but so can the legal consequences of not following the law. If you have any doubt, go through the insurance company in order to protect yourself.

If you file a claim, your insurance company is legally obligated to provide you a defense to liability or a lawsuit. They must pay the claim, even if you’re at fault. Likewise, if the other driver files a lawsuit against you, the insurance company is expected to defend you and cover the judgment, if that’s part of your policy. But if you decide to cover the damages privately and something goes wrong, you’re on your own — you could end up paying for a legal defense and judgment.

Again, if the accident involves only your car or if it truly is minor, it might make sense to pay for damages out of pocket. But as soon as there are questions of liability, personal injuries, extensive damage, or an uncooperative other driver involved, you’re probably best working through your insurance company.