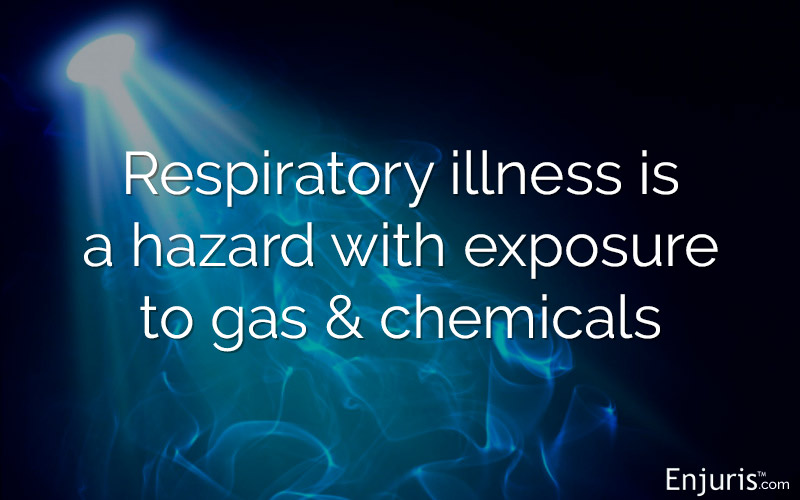 Exposure to hazardous substances can cause long-term health issues

Various demands on the oil and gas industries have led to quick turnaround times in production, and employers are finding a shortage of qualified workers to hire in Texas.

Some employers take shortcuts to fill these spots quickly and the workers hired may not have the knowledge and experience to stay safe in this inherently dangerous industry.

Employers may also take shortcuts with safety by not establishing proper procedures or ignoring the ones that are in place, including those related to exposure to gas and chemicals.

These factors add to the risk of personal injury that oil and gas workers in Texas face when exposed to dangerous chemicals, including respiratory and other long-term illnesses.

When workers are exposed to harmful chemicals, respiratory problems may manifest.
Tweet this

While there have been recent proposed changes to levels of permissible exposure for contaminants that are common on oil fields and offshore drilling sites, employers are in the best position to prevent their employees from unnecessary occupational hazards.

Some of the dangerous chemicals that workers may be subjected to include:

Hydrogen sulfide (H2S) is one of the most dangerous chemicals that a worker may come in contact with.

Many oil wells produce this naturally-occurring substance and it can be made during the manufacturing process. Workers who come in contact with this gas describe it as smelling like rotten eggs.

This gas is considered one of the most common toxic forms of air pollutants. It is highly flammable and is produced when organic matter decomposes.

Enjuris Tip: Hydrogen sulfide is released into the air, making it commonly inhaled by workers, or it can contaminate water.

Often exposure to H2S is subtle and hard for workers to recognize. Mild side effects when a person has been exposed to concentrations less than 50 parts per million include:

Breathing in hydrogen sulfide may cause respiratory difficulties and loss of consciousness when workers are exposed to higher concentrations, including those of 100 parts per million or greater.

Another harmful substance that oil and gas extraction workers may be exposed to is silica. Silica sand is often used in the hydraulic fracking process in which the earth is split so that drillers can extract oil and gas.

Silica exposure can result in serious health conditions, including lung disease or other respiratory problems.

One common form of exposure occurs when workers gauge flowback tanks, which are used in hydraulic fracking.

Oil field workers may be exposed to these dangerous chemicals and substances in a number of ways, including the following:

As mentioned above, long-term exposure to many of these hazardous substances can lead to respiratory problems, including breathing difficulty and asthmatic symptoms.

In addition to respiratory problems, some other short and long-term health effects related to exposure to harmful chemicals in offshore drilling accidents include:

Employers can take steps to prevent workers from developing respiratory problems due to their exposure at work:

The role of workers' compensation in respiratory problems cases

If exposure to hazardous chemicals at the workplace has left you with respiratory or other illnesses, you could be entitled to workers' compensation.

Enjuris tip: Enjuris offers a post-accident pain journal that can help you document your injuries and treatment plan, which can be helpful in a workers' compensation or jury trial case.

Workers' compensation would cover your medical costs, but not pain and suffering. You may then consider hiring an attorney to pursue your legal options under a personal injury claim.

Breathing in harmful chemicals today can lead to long-lasting and expensive medical issues in your future.

Whether you pursue a legal claim or not, it is important to understand your rights and responsibilities as an employee in the oil and gas industry. Not only to address your own potential case, but to help prevent a future workplace-related illnesses by knowing what problems to look for and how to report unsafe working conditions.

If you have questions or concerns about your work site, find your regional or area OSHA office through the OSHA Offices by State webpage or call 1-800-321-OSHA (6742).

Workers can file a complaint with OSHA by calling 1-800-321-OSHA (6742), online via eComplaint Form, or by printing the complaint form and mailing or faxing it to the local OSHA area office.

You may also want to read: