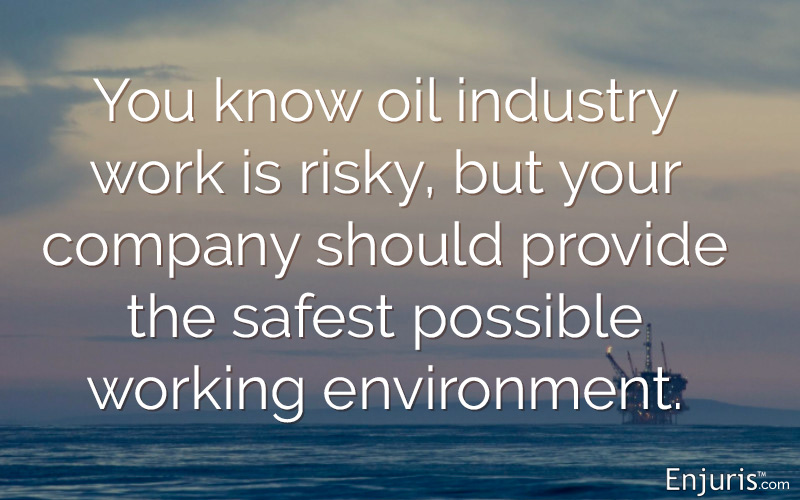 A Texas oil industry worker left his family to go work offshore and help a company procure the oil that gives the world its fuel.

He headed from Houston down into the gulf, hoping to make some money and produce a better life for his family.

While he knows the risks of working on an oil rig, he expects his company to provide the safest possible working environment.

On an otherwise typical day, he finds himself hurt in an accident that takes from him his health and his capacity to earn a living for his family.

Different versions of this story happen every day for the Texas residents who commit their lives to making the oil industry go. Even dangerous jobs have legal protections, though. Those oil industry workers who make sacrifices have a chance to file a legal claim with the help of a good Texas injury lawyer when they're hurt in an oilfield offshore drilling accident.

Because many oil industry workers spend a significant amount of their time offshore and on rigs, they might be covered under many federal laws including, but not limited to: The Jones Act, The Death on the High Seas Act, The Oil Pollution Act (OPA) (33 U.S. Code Chapter 40), The Division of Longshore and Harbor Workers' Compensation (U.S. Department of Labor) and The Outer Continental Shelf Lands Act.

When one act or another applies is dependant upon the rig worker's situation. Is the rig worker more than 3 miles, or 12 miles offshore? Is the worker on a U.S. made vessel? Could the rig worker be considered a "seaman" at the time of his or her injury?

All these questions above, with many more unmentioned, are the reason why an experienced, vetted maritime attorney is needed.

The Jones Act, which helps to ensure a vibrant U.S. maritime industry, provides protection for workers who spend the majority of their time at sea.

Oil and gas may be a dangerous industry, but your employer has a duty to provide a safe environment. You may be covered under federal law that protects maritime workers.

Most oil industry workers who spend time off-shore can qualify, but there are some rules that determine whether the Jones Act covers a particular worker.

Many individuals in Texas choose to work with a firm that has a strong standing in admiralty law. Because this maritime-specific body of law is specialized and different than Texas state law, it is critical that lawyers are trained specifically in how to bring federal lawsuits.

The Oil Pollution Act of 1990, which was passed in response to the Exxon-Valdez Spill of 1989, governs the process of compensation for injuries sustained by a spill or other refinery or rig catastrophe. Workers at a rig or refinery that experience a catastrophic event are entitled to workers' compensation claims if they are injured by the event.

Enjuris tip: Clients should ensure that their lawyers are admitted to practice in the Texas federal district courts, as well.

Common accidents and injuries in the oil industry:

Some of the most important Texas oil industry accident cases have revolved around explosions that happen out on the rigs and in the refineries. The BP refinery near Texas City exploded, killing 15 employees and injuring more than 170 employees and bystanders. The victims were collectively awarded $1.6 billion in compensation. This was the largest settlement in American oil, until the BP Spill of April 2010.

When chemicals are being used and large machinery is present, there is always the chance that something explosive will spark. Explosions typically come because of the negligence of a company either in its processes or in its implementation.

Explosions are usually caused by a company’s negligence, in its processes or in its implementation.
Tweet this

There is an area of law in Texas which sometimes calls into play the legal principle of “res ipsa loquitur.” This is Latin for “the thing speaks for itself.” Where an explosion of an oil rig or refinery is caused by the owner's negligence but direct evidence of injury to some victims is not present or apparent, the Doctrine of Res Ipsa Loquitur may apply.

If you or a loved one has worked offshore near Texas or even in an on-shore refinery, then you might need to be checked for H2S exposure. H2S is hydrogen sulfide, and it is a bi-product of oil and gas production. When inhaled in a small quantity, it will not cause major, long-term harm.

However, if oil and gas industry workers spend too much time exposed to these gasses, they can develop serious respiratory problems. Death can result, and long-term health issues may arise for people under these circumstances. Skillful lawyers are constantly helping Texas oil and gas clients prove that their injuries are a result of this sort of exposure.

In some ways, the life of a Texas oil and gas industry worker is like the life of one of the construction workers out in Dallas.

You are often working high up, with heavy things even further above you. Construction workers know that falling objects pose a major danger during the completion of any project.

Personal injury lawyers can tell you that the same is true for people working on rigs and in refineries.

Falling object injuries can cause head, neck, and back injuries. In extreme cases, these accidents can lead to death.

These construction and oil industry accidents are almost always the result of negligence, with the company being ultimately responsible for what happens to workers.

People hurt in this way can end up with thousands of dollars in hospital bills, and they have legal remedies to help them deal with this expense.

In order to procure and produce oil, employees have to expose themselves to both steam and chemicals, which have the potential to cause major injuries.

Enjuris Tip: In most cases, a worker will be protected by proper clothing. There are times, however, when the oil and gas company fails to value the life and health of workers sufficiently.

If you are exposed to chemicals or you find yourself with burns because of the steam around you, then you do have the option of filing a claim. Burns can be especially expensive to fix because of the specialized nature of skin grafting surgery.

There are many ways in which standard personal injury law intersects with oil and gas law in Texas. Like workers for any company, oil and gas employees will spend significant time on the road in the course of their duties. Any person who has driven at rush hour down Interstate 10 in Houston understands that there's danger lurking on Texas roads.

Enjuris Tip: People who are hurt in accidents can file claims for their injuries and the lost wages that come from injury. If you have to miss work for weeks or if your injuries cause your life to change, you can get a payment to make life a little easier.

Oil and gas jobs are notoriously dangerous, but the workers who perform them should be protected from unnecessary harm.

Signing up to go on an oil rig or work in a refinery should not be a death sentence.

Texas law and federal statutes protect people when they're hurt on the job in oil industry accidents. People who are injured should think about calling a good attorney who has experience taking these claims to the Texas state and federal courts.

When fireworks happen by accident 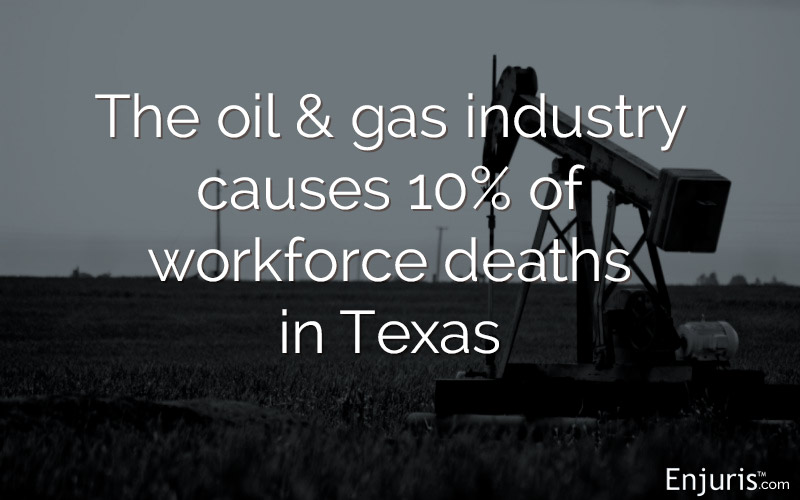 Everyone likes a good show, right?

Not when you haven’t planned for it, and not when it’s on a job site. Then it’s definitely not a good show, thank you very much.

The oil and gas industry is the biggest money-maker in Texas, and it’s also the most dangerous. Despite the danger, workers are drawn to the industry because of the promise of a better life for them and their families. That promise outweighs the potential danger of fires and explosions that are notorious in the industry.

According to EnergyWire, the oil and gas industry is directly responsible for 10% of all workplace fatalities from fires and explosions – even though they employ less than 1% of the total workforce. You do not want to be a part of this 1%.

These disasters are often caused by serious safety risks such as dangerous chemicals and gases; electrical hazards; and heavy machinery. The working conditions and chemicals also make the oil and gas rigs vulnerable to fires and explosions. Basically, these workers are spending their days in a glorified pressure cooker.

Additionally, extracting oil and natural gas from underground is equally dangerous, as the resources become trapped in underground pockets of porous rocks. Workers drill wells to let the crude oil travel upward to the bore hole, knowing that only some of them will be successful. They will also have to separate the mixture of gas, water and oil that erupts from underground.

There are also other accidents that can occur in the oil and gas industry, and these are considered far more common: contact by objects and equipment, and transportation incidents. Since these involve human intervention, they generally happen more often than fires and explosions.

Accidents on jobsites are very common and sometimes require legal intervention. If you or someone you know has been injured in an oil or gas-related incident, consider speaking with our Texas partner law firms!