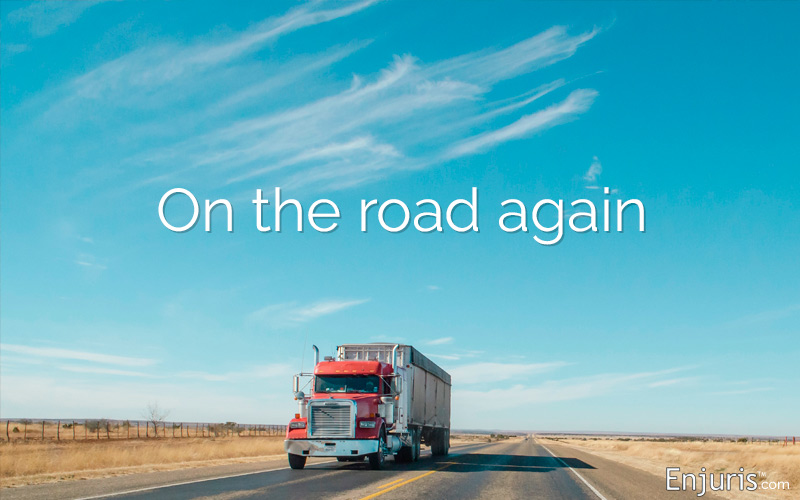 In 1899, automobile manufacturer Alexander Winton wanted to distribute his vehicles to customers around the country without putting mileage on them. His solution was to attach a cart to the back of a modified truck. The invention became known as the world’s first “semi-truck.”

Today, there are roughly 3 million semi-trucks registered in the United States—most of them much larger than Alexander Winton’s. Today’s semi-trucks are generally 70-80 feet long, have 18 wheels, and weigh as much as 80,000 pounds (40 tons).

Though 18-wheelers are a huge part of the nation’s economy, especially here in Texas, their substantial size and prevalence create the potential for serious traffic accidents.

Let’s take a look at 18-wheeler accidents in the Lone Star State.

An 18-wheeler is a truck consisting of a tractor and a trailer, and typically has 18 wheels. Most people use terms like “18-wheeler,” “big rig,” and “semi-truck” interchangeably to describe any large commercial truck.

Legally speaking, large trucks are regulated based on vehicle weight and cargo type. For that reason, it’s generally not relevant that a truck has 10 wheels or 16 wheels as opposed to 18 wheels.

Nevertheless, let’s learn a little more about the average 18-wheeler.

How big is an 18-wheeler’s engine?

What is a 5th wheel?

The 5th wheel on an 18-wheeler refers to the round plate above the drive tires that hooks the trailer and the truck together.

Bobtailing is the term used to refer to a truck driving without the trailer attached. Trucks don’t handle well when bobtailing and can be particularly dangerous in wet weather.

What is the turn radius for an 18-wheeler?

How many miles per gallon does the average 18-wheeler get?

The most fuel efficient 18-wheelers only get 8.9 miles per gallon. Side skirts that prevent wind turbulence under the trailer and round caps placed over the trailer doors are a couple ways to improve fuel-efficiency.

How much do we rely on 18-wheelers?

Recent estimates indicate that roughly 70% of all products in the United States are delivered by 18-wheelers. What’s more, 18-wheelers drive roughly 175 billion miles per year.

Like other large commercial vehicles, the size of 18-wheelers makes them prone to several accident types, including:

All sorts of factors can contribute to an 18-wheeler accident.

Some of the most common contributing factors include:

How does an 18-wheeler accident differ from other types of accidents?

As is the case with all motor vehicle accidents, first you have to establish liability in order to receive compensation for any injuries or damages you suffer in the accident.

There are 2 main differences between 18-wheeler accidents and most car accidents:

Let’s dive a little deeper into both these differences.

First, truck drivers and trucking companies in Texas must comply with the Federal Motor Carrier Safety Administration laws as well as the state laws located in Title 7 of the Texas Transportation Code. These laws address everything from maximum cargo weight to consecutive hours a truck driver can drive without a break.

If a truck driver or trucking company violates any of these laws and an accident results, proving liability becomes considerably easier for the injured person.

Second, several people and entities that may be liable for an 18-wheeler accident depending on the circumstances, including:

In some cases, both you and the truck driver (or some other party associated with the truck) may be at fault for the accident. Texas follows what is called the modified comparative fault rule. Under this rule, the degree to which you can recover damages is limited to your degree of fault.

Do you need a truck accident attorney?

Accidents involving 18-wheelers tend to cause significant damage. As a result, insurers are reluctant to simply pay the damages without a fight.

An experienced Texas attorney can investigate the cause of the accident, identify all the potentially liable parties, negotiated with the insurance company, and take the case to trial if necessary.

Are trucks required to have black boxes?

The Federal Motor Carrier Safety Administration requires all commercial trucks and 18-wheelers to carry electronic logging devices (ELDs). These devices log the number of hours a driver spends behind the wheel to ensure that the trucker complies with the laws limiting the number of hours a truck driver can drive consecutively.

Many 18-wheelers are also equipped with event data recorders (EDRs). These devices are similar to the “black boxes” found in airplanes and record the events leading up to an accident, including the speed, location, and brake usage.

An attorney can help you obtain these devices to see if the information may help your case.

Enjuris tip: You can use our free online directory to locate an experienced Texas truck accident attorney in your area.