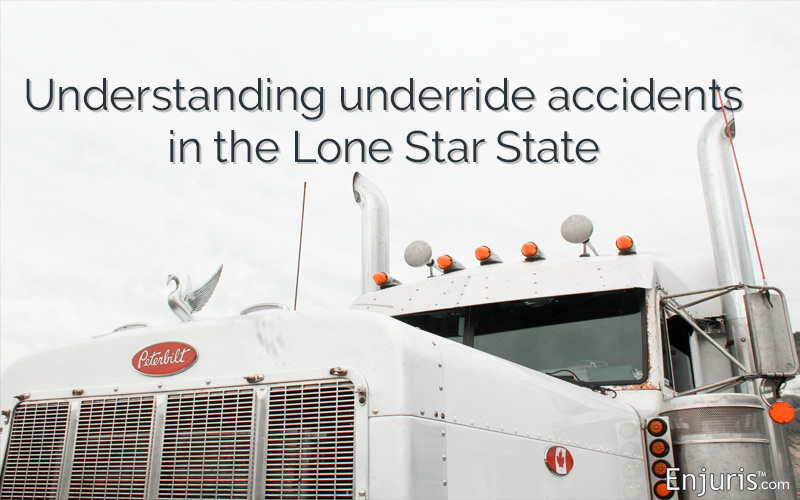 Learn how the law treats underride accidents in Texas

Many accidents involving large trucks and cars are similar: head-on collisions, side impacts, and rear-end collisions for example.

However, there is one type of accident that is exclusive to large trucks: underride accidents.

Underride accidents occur when a smaller vehicle becomes wedged underneath a larger truck. They are one of the most devastating types of accidents and often result in serious injury or death.

If you or a loved one has been injured in an underride accident, a personal injury lawsuit or wrongful death claim may be appropriate.

What is an underride accident?

An underride accident occurs when a vehicle crashes into a large truck and becomes trapped underneath the truck.

There are 2 main types of underride accidents:

Underride accidents are very serious. The top of your car can easily get sheared off. On top of that, your airbags, crumple zones, seatbelts, and other safety features may be rendered useless because the first point of impact is the windshield.

If you survive an underride crash, the injuries you’re most likely to suffer are catastrophic and include:

Who’s liable for an underride accident?

Example #1:
Jill is driving in the middle lane of a 3-lane highway when the truck in the far-right lane suddenly swerves into her lane and forces her vehicle under its trailer. In this case, the truck driver is likely liable for the accident.
Example #2:
Joe is driving behind a large truck. He’s following too closely and when the truck slows down he slams into the back of the trailer. In this case, Joe is likely liable for the accident.

In some cases, the truck driver and the driver of the passenger-vehicle are liable for the accident.

For example, let’s say a passenger-vehicle driver is following a truck too closely, but the truck is driving with a broken brake light and no reflectors. In this situation, both parties may be partially responsible if a rear-end collision occurs.

Texas follows the modified comparative fault rule. This means a person’s damages are reduced by the percentage of their fault.

How can underride truck accidents be prevented?

In an attempt to help prevent underride accidents, trucks are required to have underride guards installed. These guards are designed to prevent smaller vehicles from being pinned beneath the trailer if a rear-end collision occurs.

Interestingly, it was Hollywood star Jayne Mansfield's death on a Louisiana highway in 1967 that sparked the first calls for underride guards (though it wasn’t until 1998 that rear guards—known as Mansfield bars—became legally required).

Unfortunately, side guards aren’t required under the law, even though the National Transportation Safety Board concluded that they would significantly reduce injuries and deaths on American’s roads.

Enjuris tip: The laws regarding underride guards could change at any time, as federal lawmakers routinely introduce legislation that would require all tractor-trailers to be equipped with an underride guard on the sides and front. Opponents argue the underride guards aren’t proven to increase safety, and the requirement would pose economic hardship for smaller trucking businesses.

The best way to avoid an underride accident is to obey the rules of the road and to keep plenty of room between your vehicle and the large truck in front of you.

If you or a loved one has been injured in an underride accident, use our free online lawyer directory to locate an experienced Texas truck accident attorney in your area who can help.