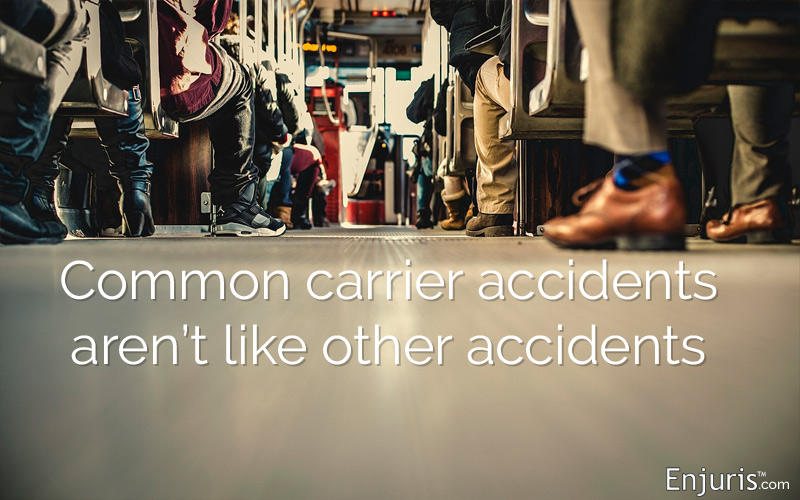 What happens when a vehicle designed to transport passengers like a bus or a taxi is involved in an accident in Texas?

There’s an illusion of control when you’re driving a vehicle. This illusion is based, in part, on the fact that people tend to falsely attribute a chance outcome to their own skill.

For most people, the illusion of control is shattered when they’re a passenger in a taxi, bus, or some other vehicle designed to transport the public as part of a business. Making matters worse, most people don’t know exactly what happens if they’re injured in an accident as a passenger of a transport vehicle.

Is the driver responsible? Is the company that owns the vehicle responsible? What if you’re injured while traveling on public transportation? Can the government be sued?

The term “common carrier” refers to any individual or business transporting people in exchange for money. Common examples include:

The court explained that common carriers are “those in the business of carrying passengers and goods who hold themselves out for hire by the public.” The court went on to explain that when determining whether someone is a common carrier, it looks primarily at their “function.”

In holding that DART was, in fact, a common carrier, the court made clear that common carriers include trains, buses, airplanes, taxis, street cars, and other vehicles designed to take members of the public from one place to another.

Practically speaking, this simply means that it’s easier to find a common carrier negligent than it is to find a “regular driver” negligent.

Common carriers, such as bus drivers and taxi drivers, are held to a higher standard of care than drivers who aren’t in the business of transporting people. Tweet this

Who can be held liable for a bus or taxi accident in Texas?

When it comes to determining who is negligent in the case of a common carrier accident, there are several parties that can be held liable, including:

Any other party whose negligence resulted in the accident (such as a driver of a motor vehicle who caused the common carrier accident).

Enjuris Tip: It’s not always easy to tell who’s responsible for a common carrier accident. An experienced attorney can investigate your claim and make sure all potentially liable parties are brought into the lawsuit in order to maximize your chances of recovery. Consider using our free online directory to locate a Texas attorney in your area.

What if the common carrier is a government entity?

Many forms of public transportation are owned by government entities. For example, a school bus may be owned by a city or county. Government entities can be sued just like regular businesses or people. However, there are a couple of important differences.

In Texas, a lawsuit filed against a government entity must be filed within 180 days of the incident giving rise to the lawsuit.

Second, when suing a government entity, you must provide the entity with written notice of the lawsuit before filing the lawsuit.

Enjuris Tip: Lawsuits involving government entities are more complex. If you think you may have a claim against a government entity, we recommend contacting an experienced Texas attorney immediately.

Just like regular car accidents, a number of things can cause accidents involving common carriers, such as:

Facing factsIn 2017, there were 983,231 buses registered in the United States. In that same year, 274 people were killed in bus accidents.

As with regular car accidents, injuries suffered in a common carrier accident range from minor to catastrophic and may include:

Remember, to receive compensation, the at-fault party must be liable. Once liability has been established, you can recover the following damages in Texas:

Keep in mind that Texas follows the modified comparative fault theory. This means that your damages are reduced according to your degree of fault.

For example, if you’re found 30% at fault for the common carrier accident, and the other party is found 70% at fault, you will only be able to recover 70% of your damages. What’s more, if your degree of fault exceeds 50%, you’re prohibited from recovering any damages.

In a common carrier accident, it’s not unusual for your damages to add up quickly. It might put your mind at ease to know that Texas requires common carriers to carry liability insurance.

In Texas (as well as other states), ride-share drivers are required to carry $1 million in liability insurance.

Enjuris tip: There are some important things you should know when it comes to liability in the ever-evolving ride-share industry.

What should you do if you’re involved in a common carrier accident?

Whether you are the passenger or driver, there are certain steps you should take after an accident involving a bus, taxi or other common carrier.

The first thing you need to do following a common carrier accident is to check yourself for physical injuries. If you’re injured, seek medical attention as soon as you can.

Once you know that you’re okay, help anyone else who needs medical attention, and get your vehicle out of the flow of traffic if you can. If you can’t move your vehicle because of damage, at least put on your hazard lights.

Once you’re satisfied that you and everyone else is safe, there are 2 things you can do that will help your chances at recovering damages in any future insurance claim or lawsuit:

1. Collect information from the scene of the accident

As long as it’s safe to do so, collect as much information from the accident scene as possible. Important information that may help your claim or lawsuit includes:

2. Seek medical attention and document everything

What’s more, by seeking medical attention, you’ll eliminate the possibility that the at-fault party will successfully argue that you weren’t really injured or that you didn’t take reasonable steps to mitigate your damages.

In addition to seeking medical attention, it’s important to document your injuries and medical treatment. The forms below can help: