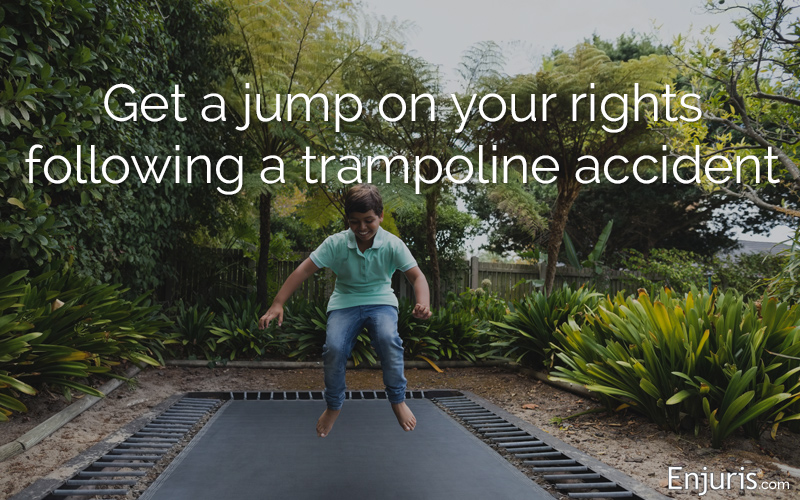 What happens if someone is seriously injured on a trampoline?

Who gets hurt on a trampoline?

The American Academy of Orthopaedic Surgeons says more than 90% of trampoline injuries happen to children between the ages of 5 and 14. More than three-quarters are the result of 2 children colliding in the air while jumping at the same time.

One study by the National Institutes of Health reported that the majority of injuries were on the main part of the trampoline, which includes falling on the mat, collisions with others, or falls on the frame or springs. About 22% of the injuries involved falling off a trampoline. Also, nearly 75% of the accidents happened when there were more than 2 people using a trampoline at the same time.

The most commonly reported trampoline injuries are:

The 4 main causes of trampoline injuries are:

Liability for a trampoline injury

Personal injury and premises liability law, which includes injury claims arising from trampoline accidents, hinges on the concept of negligence. In order to recover damages for a personal injury, the injured person needs to prove the following:

Most trampoline accidents happen for one of these reasons:

How the accident happened will inform which area of law would be most effective for a lawsuit.

Enjuris tip: The attractive nuisance doctrine might be part of your premises liability claim. This is used when a child is injured on someone’s property, even if they were trespassing. The law says that if your property has a condition that might lure a child (this might include swimming pools, heavy machinery, or other things), you’re responsible for keeping children away or unharmed. That might mean installing a fence around a trampoline, removing its ladder (if that would prevent a child from getting in) or taking other precautions so that an uninvited child cannot use the trampoline without your knowledge.

Some homeowners’ insurance policies will charge additional premiums for homes with trampolines. If you’re purchasing or own a trampoline, it’s important to check your policy. You want to be sure the insurer is aware that you have a trampoline because if it’s not specifically covered under your policy, the insurance company might not cover you if someone is injured.

A trampoline can be defective in 3 ways:

There are circumstances when you might be able to sue another trampoline user for your injuries. For example, if someone knocked you off the trampoline negligently (either on purpose or recklessly), jumped into the trampoline when you weren’t expecting it, or in some other way causes your injury through behavior that could be considered unreasonable, then they may be held liable.

This might be especially important if you were injured at a trampoline gym, rather than at someone’s home. If you’ve ever been to a trampoline park or gym, you likely signed a waiver that specifies that the owner is not responsible for certain injuries.

However, that waiver doesn’t mean you can’t sue the gym if your injury was caused by the gym’s negligence, recklessness, or intentional conduct.

For example, most trampoline parks have areas that are specially designated for younger children, and they usually have staff who are present to enforce the rules. If an employee who’s tasked with preventing older children into the younger child section fails to do so and your child is injured by an adult who wasn’t supposed to be there, you might be able to sue both the gym and the adult whose behavior injured your child.

The courts have said that certain activities are inherently dangerous. This might include football, skiing, drag racing, bungee jumping and rappelling. A person should know that they might get hurt if they participate in these activities. While there’s no specific list of dangerous activities, someone who’s sued for a trampoline injury might argue that the participant knew or should’ve known that there was a risk of injury.

This is more likely to apply to an injury of an adult than a child, but it could also apply when a parent gives permission for or has knowledge of their child’s participation in a dangerous activity.

Damages from a trampoline injury

If you’re injured in a trampoline accident, you can recover damages for:

Again, accidents happen. If you own a trampoline that is free of defects and you’re injured on your own property, there’s no one to sue. If you or your child were injured at a friend’s house while using their trampoline, you’d have to prove that your friend was negligent — that they didn’t properly maintain or supervise trampoline use — or that it was defective.

Tips for staying safe on a trampoline

It’s always important to be careful, understand the risks with any activity, and take the correct precautions to stay safe.

Make sure equipment is well-maintained.

Supporting bars, springs, and landing surfaces should have adequate protective padding that’s in good condition and correctly positioned. The equipment should not have tears, detached parts, or deterioration. It should be replaced if there’s visible wear and tear or damage.

An adult should supervise children at all times when they are using a trampoline.

Enjuris tip: If you’re the parent of a young child, it’s inevitable that your child will eventually have the opportunity to play in a bounce house. Because bounce houses are inflatable and soft, parents think they’re safer than trampolines, but many injuries are similar.

If you were injured in a trampoline accident and you think you might have a lawsuit, you can use the Enjuris law firm directory to find an attorney near you who can help with your case.