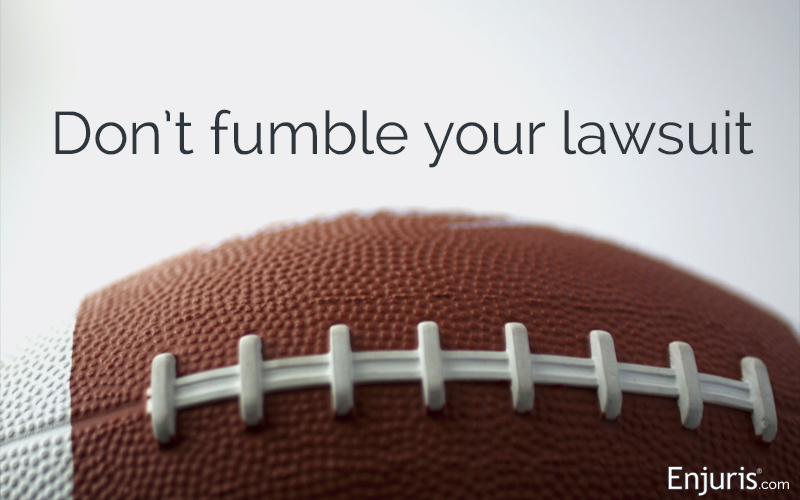 Can you recover damages for your football injury?

Korey Stringer, an All-American offensive tackle for the Minnesota Vikings, was practicing with the rest of the offensive line on a practice field in Mankato, Minnesota on a hot July afternoon in 2001 when he suddenly dropped down to one knee.

A few moments later, he struggled to his feet and walked off the field. A reporter saw him stumble and lurch into the air-conditioned media center that leads to the trainer’s office before collapsing.

The 21-year-old Stringer was rushed to the hospital and pronounced dead from a heat stroke a few hours later. His body had reached a core temperature of 108 degrees.

Football has been “America’s game” for the past half-century. Sports fans spend more money and give more time to football than any other sport. What’s more, participation is high among men and women of all ages, and it’s by far the most popular sport for high school boys to play. But the game has a troubling history of serious and often preventable injuries.

So what happens when someone is injured playing football? Can they recover damages?

In this article, we’ll take a closer look at football injuries and personal injury claims.

Roughly 5.16 million people over the age of 6 played tackle football in the US in 2018.
Tweet this

How concerned should football players be about injuries?

According to the National Safety Council (NSC), more than 341,000 football injuries required a trip to the emergency room in 2017.

Fatalities in football are rare, but they do happen — as the Korey Stringer case shows. A total of 12 football-related deaths were recorded in 2018, according to a report published by the National Center for Catastrophic Sports Injury Research. The number of deaths continues the 10-year trend of football-related fatalities at an overall rate of .021 per 100,000 football participants.

What’s more, injuries may be underreported in football for a couple of reasons. First, football players are often taught to “play through the pain.” As a consequence, some injuries go unnoticed. Second, most football organizations aren’t legally required to keep track of injuries. Third, the symptoms of certain injuries don’t appear until after the player is done playing football.

There were 12 reported football-related deaths in 2018, but injuries may be vastly underreported. Tweet this

With respect to this last point, chronic traumatic encephalopathy (CTE) is a brain disorder that is particularly prevalent among football players and caused by repeated head injuries. The symptoms of CTE get worse over time but may not be noticed for months, years, or even decades after the last blow to the head.

Facing factsCanada recently passed a law making it illegal for children younger than 12 to play tackle football. There is support for a similar law in the US. In 2019, researchers at the University of Washington School of Medicine surveyed 1,025 parents nationwide and found that 61% supported bans on youth tackle football. Nevertheless, no such law has been passed in the U.S. to date.

Football is considered one of the most dangerous sports to play and, if you’ve ever watched a football game, it’s not hard to understand why.

Football injuries, ranging from minor to catastrophic, occur during football games and practices due to the full-contact nature of the sport. What’s more, because football is played outside in heavy equipment, heat-related injuries are a concern.

Concussions and other brain injuries

Concussions occur when an impact (such as another player making a tackle) causes the brain to hit the inside of the skull. Symptoms include:

One of the reasons concussions are so prevalent among football players is that a person who suffers 1 concussion is much more likely to suffer a 2nd concussion. The CDC reports that having more than 1 concussion can cause depression, anxiety, aggression, personality changes, and an increased risk of certain disorders, including Alzheimer’s and Parkinson’s disease.

Concussions (or even repeated blows to the head that don’t result in concussions) can lead to CTE. CTE is a degenerative brain disorder that may not show symptoms until months, years, or even decades after the injury. Common symptoms of CTE include memory loss, impaired judgment, aggression, and depression.

Facing factsA study published in the Journal of the American Medical Association looked at the brains of 111 deceased NFL players and found that 110 of them had CTE.

Heat-related injuries, like the one suffered by Korey Stringer, are a concern for football players, especially when practices begin (usually in August). The earliest symptoms of a heat injury are painful cramping of major muscle groups. If not treated with cooling and water, these cramps can progress to heat exhaustion and heat stroke (a condition caused by your body overheating, which can result in brain damage, organ damage, and even death).

Fortunately, heat-related illnesses can be prevented. Here are some tips:

Paralysis, which can be partial or full, occurs when the nerves that spread out from the spinal cord are damaged. In football, paralysis is most often caused by helmet-lead tackling. Shockingly, this type of tackling was the direct cause of 30 permanent paralysis injuries in 1968. Safety innovations and rule changes have since made football-related paralysis far less common.

Real Life Example: Eric LeGrand, former Rutgers University football star, suffered a spinal cord injury while making a tackle during the 4th quarter of a college football game in 2010. Though his initial prognosis was grim, Eric beat all expectations for his recovery and rehabilitation. He now works to inspire those living with and impacted by paralysis. You can learn more about Eric at his website.

Football is a physical sport and some injuries are inevitable. A player might jam their finger while diving for a football or break their arm while being tackled. These sorts of injuries are typically not recoverable, unless the athlete is a professional and is eligible for workers’ compensation.

However, when injuries occur as a result of actions that are beyond the scope ordinarily contemplated for the activity, several parties may be liable depending on the nature of the injury. Potentially liable parties include: coaches, schools and other organizations, players, manufacturers, and medical professionals.

Coaches have a legal duty to exercise reasonable care to prevent foreseeable risks of harm to their players. A coach may be liable for a player’s injuries if they breach this duty by, for example, forcing a player to return to a game when they’re showing signs of a concussion.

The parents of Ryan Spence, a 12-year-old football player, sued Ryan’s coach, Nicholas Banschbach, for negligence after Nicholas swung a tackling dummy at Ryan’s legs during practice. The dummy tore Ryan’s cruciate ligament and other cartilage and ligaments in his knee.

The lawsuit alleged that the “tackling dummy drill” was highly unorthodox and that it was illegal because of its propensity for causing injury.

Schools and sports organizations generally owe a duty to exercise reasonable care to prevent foreseeable risks of harm to the players in their school or organization. A school or organization may be liable if they breach this duty by, for example, failing to remedy a dangerous condition (such as a slippery concrete surface around the perimeter of the field) or failing to implement a concussion protocol.

A school or organization may also be liable for the actions of their coaches or other employees under the doctrine of respondeat superior.

In the locker room after the game, Rashaun vomited several times. Despite the obvious signs of distress, the coaches didn’t call 9-1-1 or follow proper concussion protocol. Rashaun’s father took Rashaun to the hospital that evening where Rashaun underwent emergency surgery to relieve swelling in his brain.

Rashaun sued the coaching staff and the school for negligence. He was awarded $7.1 million.

Other football players may be liable for your injury if your injury was the result of actions that are outside the scope normally permitted by the sport.

During a professional football game between the Cleveland Browns and the Pittsburgh Steelers, Myles Garrett, a defensive player for the Browns, tackled Mason Rudolph, a quarterback for the Steelers. A scuffle ensued after the play was whistled dead. During the scuffle, Myles removed Mason’s helmet and hit him over the head with it.

Though Mason has not yet filed a lawsuit against Myles, his attorney indicated that he might. If he files a lawsuit, the challenge for Mason will be proving that he suffered damages, as he didn’t appear to be injured on the play.

A manufacturer might be liable under a product liability claim if the manufacturer sold a product (such as a football helmet or cleats) that was defective, lacked proper warnings, or was unreasonably dangerous.

A medical malpractice claim might be appropriate if a doctor failed to properly diagnose a football player’s condition or gave improper advice.

Sharrif contends that he consented to a minor knee-scope procedure, but that Dr. Andrews instead performed a more invasive cartilage-regrowth procedure that Sharrif did not and would not have consented to.

The lawsuit has not been resolved.

A wrongful death claim might be appropriate if the football player suffered a fatal injury.

Wrongful death claims can be filed by certain family members of the deceased, and are intended to compensate family members for the loss of a loved one.

Common defenses to lawsuits based on football injuries

When a football player is injured, there are 3 defenses that are commonly raised by the defendant and their legal team:

When minors sustain football injuries, there are a few things to keep in mind:

In a football injury case, you’re entitled to compensation from the person or entity legally responsible for your injuries. The legal term for this compensation is “damages.” Exactly what damages you can recover varies from state to state, but you can usually recover:

How to prevent football injuries

Injuries are a part of the game, but the American Academy of Orthopaedic Surgeons insists there are some things you can do to limit your chances of suffering a serious injury while playing football:

Hopefully, you’ll have a long and healthy football career. But if you’re injured, consider using our free online directory to locate an attorney in your area who can help you recover the damages you deserve.