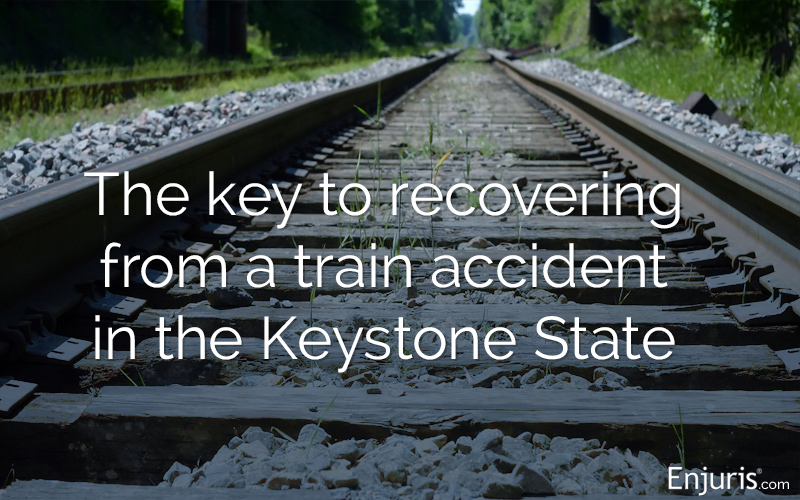 On May 12, 2015, an Amtrak Northeast Regional train was traveling through Philadelphia, Pennsylvania. As the train approached a sharp curve, the driver failed to slow down.

“I got thrown like a penny,” said one passenger who weighed 250 pounds. “That’s how violent this was.”

More than 125 civil cases were filed against Amtrak by passengers and family members. Amtrak admitted fault and reached a $265 million settlement.

Here at Enjuris, we hope you never have to experience anything like the Philadelphia Amtrak crash. However, if the unthinkable happens and you’re involved in a train accident, we want to make sure you have all the information you need.

The most common causes of train accidents can be grouped into 5 categories:

According to the United States Department of Transportation, human factors (such as failing to slow down when approaching a curve) and track issues (such as broken rails) cause the most train accidents.

The majority of train-related fatalities involve a person being killed as they cross a train track in the path of an oncoming train. This type of accident may be the result of a suicide or a defective traffic signal.

Railroad companies and their employees owe passengers and bystanders a duty to use the utmost care to avoid causing injury to them or their property.

In addition, railroad equipment manufacturers owe a duty of reasonable care to anyone who might use or be impacted by their products.

If either of these duties is breached and an accident occurs, the injured party can sue for negligence. Depending on the nature of the accident, one or more of the following parties may be responsible:

Just as railroad companies and manufacturers owe a duty of care, other drivers and pedestrians owe a duty of care. As a result, a driver who ignores a train crossing warning light and causes an accident or a pedestrian who steps in front of a train can be held personally liable for any damages caused by the ensuing accident.

Enjuris tip:
If the person who caused the accident was killed in the accident, the plaintiff can file a lawsuit against the deceased’s estate. On the other hand, if an innocent person was killed in a train accident, certain members of their family can recover damages from the at-fault party by filing a wrongful death lawsuit.

What damages are recoverable in Pennsylvania?

Railroad accidents are no different than car accidents in terms of what damages can be recovered. In Pennsylvania, a person injured in a train accident can recover the following:

Federal law caps the total damages that can be recovered in a single train accident at $295 million. The amount was increased from $200 million following the Philadelphia Amtrak crash. The original law was passed by congress in 1997 as part of a compromise to bail out the ailing railroad industry.

Enjuris tip:
If you were injured in a train accident, it’s important that you keep a journal detailing the impact of the accident on your day-to-day life, as well as copies of your medical bills related to the accident. These records will come in handy when it comes time to support your claim for damages.

In other words, a railroad employee cannot file a workers’ compensation claim (like most employees), but instead has to file a claim under FELA.

The second major difference is that railroad employees can recover more money under FELA. While workers’ compensation is typically capped at a certain amount, there are no damage limits under FELA. In addition, injured railroad workers can receive damages for pain and suffering, unlike injured employees who file a workers’ comp claim.

Enjuris tip: Take a look at the 5 deadliest train accidents in U.S. history.

Steps to take after a Pennsylvania train accident

If you’ve been injured in a train accident, the most important thing you can do is seek medical treatment. Even if you don’t think your injuries are severe, it’s important to rule out internal injuries that don’t show symptoms for days or even weeks after the injury is sustained. What’s more, visiting the doctor will help prevent the insurance company or defendant from arguing that you weren’t really injured.

Once you’re safe, you should:

In addition, you should strongly consider reaching out to an attorney who has experience with train accident cases. Our free online directory can help.