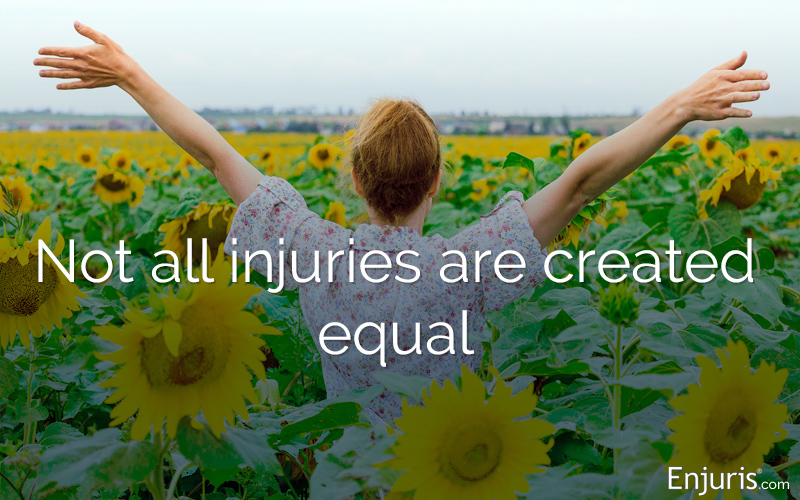 There are no “good” injuries, but most would agree that some injuries are worse than others.

The American Medical Association (AMA) defines a “catastrophic injury” as a severe injury to the spine or brain. The National Center for Catastrophic Sports Injury Research (NCCSIR) has a much broader definition that includes fatalities, temporary or transient paralysis, cardiac arrest, and other serious injuries.

However you choose to define the term, there are a few things you should know about catastrophic injuries and how they’re treated under Indiana law.

What are the common types of catastrophic injuries?

What are the common causes of catastrophic injuries?

An American is accidentally injured every second and killed every 3 minutes by a preventable event, according to the National Safety Council.

Real Life Example:
Indiana University cheerleader Kelly Craig was a passenger in a Ford Taurus heading east on County Road 240. At the same time, a GMC truck driven by a drunk driver was heading west. The truck drifted into the eastbound lane at 70 miles per hour and collided with the Ford Taurus.

Kelly was paralyzed from her neck down as a result of the accident.

Despite the tragic crash, Kelly became a successful teacher and recently released her memoir Fractured Not Broken.

Who can be sued for a catastrophic injury?

As is the case with all personal injury cases, you must prove that someone is at fault for your injury in order to recover damages. Who’s at fault depends on the nature of your accident.

Let’s take a look at some common defendants:

In most catastrophic injury cases, the legal theory used to prove liability is negligence. Negligence requires the plaintiff to establish that:

Enjuris tip: Learn more about establishing negligence in Indiana, including what happens when the plaintiff is partially at fault for an accident.

What happens if a catastrophic injury is sustained at work?

In Indiana, most employers are required to carry workers’ compensation insurance under the Workers’ Compensation Act.

Workers’ compensation covers most injuries so long as the injury occurs while you’re performing a work duty. For example, you’ll be covered if you fall from a ladder while working at a construction site, but you probably won’t be covered if you get into an accident on your way home from work.

Workers’ compensation provides benefits depending on the nature of your injury. Catastrophic injuries will pay out significantly more than minor injuries, but all injuries are subject to certain state caps. If, however, you’re injured by a third party (someone other than your employer or colleagues) while at work, you may be able to file a third-party lawsuit against the at-fault party and recover damages above and beyond what you receive under workers’ compensation.

What compensation can I recover for a catastrophic injury?

In Indiana, plaintiffs can recover both economic and non-economic damages:

Enjuris tip: Learn more about the damages available in Indiana personal injury lawsuits, as well as how to estimate the value of your catastrophic injury claim.

In Indiana, the following damages are capped:

Real Life Examples: Though every case is different, here are some notable verdicts for catastrophic injury lawsuits in Indiana:

Ready to sit down and talk with an attorney? Use our free online directory to locate one in your area. Most initial consultations are free.