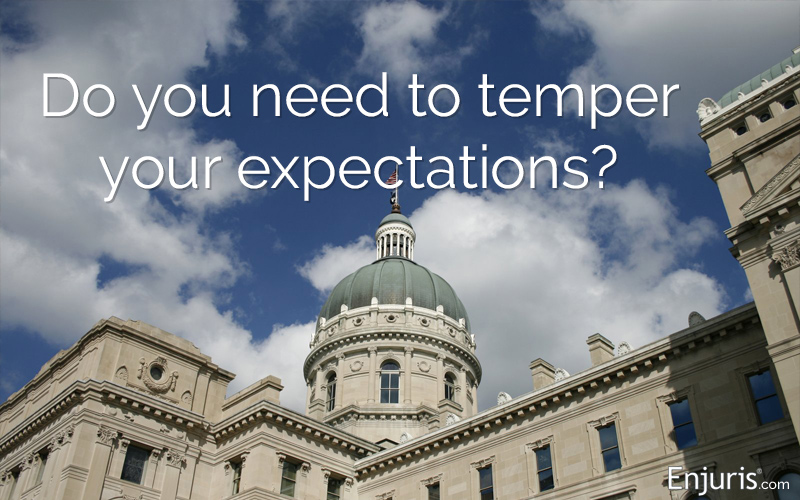 Are there limits on the amount of compensation you can recover in the Hoosier State?

When you hear about a massive jury award, such as the $157 million awarded to the wife of an Indiana man who died when the tree stand he was using malfunctioned, you might wonder if you are eligible for such compensation after an injury. But it’s important to understand that it’s not always the case that the plaintiff receives the entire amount.

Most states, including Indiana, have damage caps that limit the amount of damages you can receive. If the jury awards an amount above those caps, the court will reduce the amount.

In a personal injury case, you’re entitled to compensation from the person or entity responsible for your injuries. In Indiana, there are 3 main categories of damages:

Whether or not a damage cap applies is dependent on a number of factors, including the category of damages awarded, the nature of the case, and the type of defendant.

In Indiana, punitive damages are capped at 3 times the amount of the compensatory (economic and noneconomic) damage award or $50,000, whichever is greater.

You’re hit by a drunk driver. Fortunately, it was a low-speed crash and you only sustained minor damages to your car and minor scrapes and bruises. As a result, you receive $20,000 in economic and noneconomic damages.

However, because the driver was 3 times over the legal limit and driving with a suspended license, the jury awarded $200,000 in punitive damages.

Under Indiana’s damage cap laws, the court would reduce the $200,000 punitive damage award to $60,000 (3 times your compensatory damages).

When a medical professional makes a mistake, the consequences can be catastrophic. Nevertheless, Indiana caps medical malpractice damages at $1.8 million for an act of malpractice that occurs after June 30, 2019.

If your lawsuit is filed against a government entity, the total amount you can recover is capped at $700,000.

While you might not think your claim involves a government defendant, you might be surprised. Government defendants include those at the federal, state, and local levels. Your lawsuit might involve the government if you were injured by public transportation (such as a city bus) or you fell on government-owned property (such as on the steps of a public library).

Indiana follows the modified comparative fault rule. This means that the plaintiff is prohibited from recovering ANY damages if they’re deemed 51% at fault or more. If the plaintiff is considered less than 51% at fault, their damages will be reduced according to their percentage of fault.

You’re traveling to work at dusk with a broken taillight. Another vehicle is traveling behind you. You slow down to stop at a stoplight and the car behind you rear-ends you. You suffer a serious case of whiplash and sue the other driver for $100,000.

In this scenario, the most you could recover is $80,000 (your damages reduced by your percentage of fault). If, however, you were found to be 60% at fault for the collision, you’d be unable to recover any compensation for damages whatsoever.

Enjuris tip: The maximum amount of income benefits allowed is set every year, but you can find the most recent weekly wage compensation rate on the Workers’ Compensation Board of Indiana’s website.

Got all of that?

If you have questions about your lawsuit, including whether it’s subject to damage caps, you can reach out to a personal injury attorney. Locate one using our free online directory.