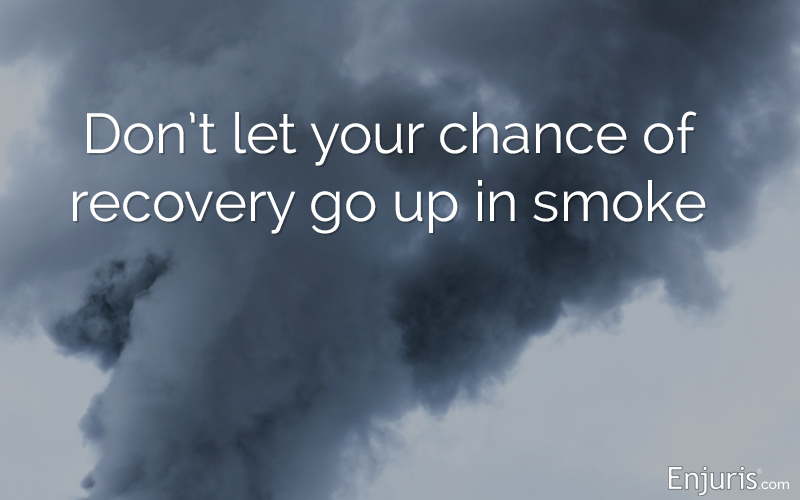 A burn injury occurs when some or all of a person’s layers of skin are destroyed by a hot liquid (called a “scald burn”), a hot solid (called a “contact burn”), or a flame (called a “flame burn”).

According to the Indiana State Department of Health, roughly 123 Hoosiers die from burn injuries every year. What’s more, burn injuries account for more than 2% of all inpatient hospitalizations.

If your burn injury was caused by someone else or if it was sustained at work, you might be able to recover compensation by filing a personal injury lawsuit or a workers’ compensation claim.

Let’s take a look at burn injuries and burn injury claims in Indiana.

Burns are generally classified based on their severity:

Burns can result in intense and prolonged pain. What’s more, severe burns can cause a number of surprising complications, including:

Facing factsAccording to the American Burn Association, most burn injuries treated in burn centers in 2018 were sustained in the home (73%) followed by work (8%).

Some of the most common causes of burn injuries include:

Real Life Example: A tanker carrying 4,000 gallons of jet fuel overturned and exploded on the ramp from I-465 to I-70 in Indianapolis. The truck driver and several good Samaritans who stopped at the scene were severely burned. An initial investigation found that the truck driver took the exit at an unsafe speed, causing the truck to roll-over.

If you sustain a burn injury, there are 4 legal options that might allow you to recover compensation depending on the circumstances of your injury:

1. A negligence lawsuit for a burn injury

Most accidents happen because someone is careless. If someone’s carelessness caused your burn injury, the person may be considered negligent.

To prove negligence in Indiana, you must establish that:

Enjuris tip:Learn how to establish negligence in Indiana, and how to file a personal injury lawsuit based on negligence.

Indiana is a modified comparative fault state, which means that if you were partially at fault for your injury, your damage award will be reduced by your percentage of fault. What’s more, if the court determines that you were more than 50% at fault for the accident, you’re barred from recovering ANY damages.

2. A product liability lawsuit for a burn injury

There are a number of products that could cause burns, including defective barbecue grills, fireworks, smartphones, and even cooking spray.

Real Life Example: Two people suffered fatal burns when the Tesla they were inside burst into flames in downtown Indianapolis. A lawsuit was subsequently filed against the car manufacturer claiming that several defects, including unstable lithium-ion batteries that ignite spontaneously or when impacted, caused the explosion. The lawsuit further alleges that faulty door handles prevented the passengers from escaping the vehicle once the car burst into flames.

3. A premises liability lawsuit for a burn injury

Premises liability is a specialty within negligence law that holds landowners responsible for injuries to others on their property. Whether or not a landowner can be held liable for a particular injury depends, in part, on the why the injured person was on the property. But generally speaking, landowners are liable for dangerous conditions that they fail to make safe or warn visitors about.

Jimmy, a 10-year-old boy, was picking strawberries when he walked underneath the herbicide sprayer. The herbicide came in contact with Jimmy’s face and caused severe burns.

In this example, Jimmy (or his parents) may be able to recover damages by filing a premises liability lawsuit against Bill.

Enjuris tip: Learn more about premises liability laws, including what elements need to be established to receive compensation in a lawsuit.

4. A workers’ compensation claim for a burn injury

Workers’ compensation is no-fault insurance, which means injured workers can receive financial compensation regardless of who’s at fault for the injury.

Real Life Example: Five workers at the Waupaca Foundry Plant in Tell City, Indiana were taken to a burn center with serious burns after they were injured while doing maintenance on top of a cupola furnace (a melting device used in foundries to melt cast iron). A subsequent investigation found that a plug in the tap hole caused a flash fire that injured the workers.

Economic damages refer to loses that have an actual monetary value, such as:

Non-economic damages refer to the losses that don’t have a reasonably objective monetary value, such as:

Enjuris tip: Learn more about the types of compensation available in an Indiana personal injury lawsuit, and estimate how much your claim is worth.

If the burn victim dies because of the burn injury, certain family members can recover compensation by filing a wrongful death lawsuit.

Burn victims commonly point to a strong support system as one of the most important factors in a successful recovery. With that in mind, here are some resources that can help you after a burn injury:

Ready to talk to an attorney so you can start down the road to recovery? Find one in our Enjuris Lawyer Directory.