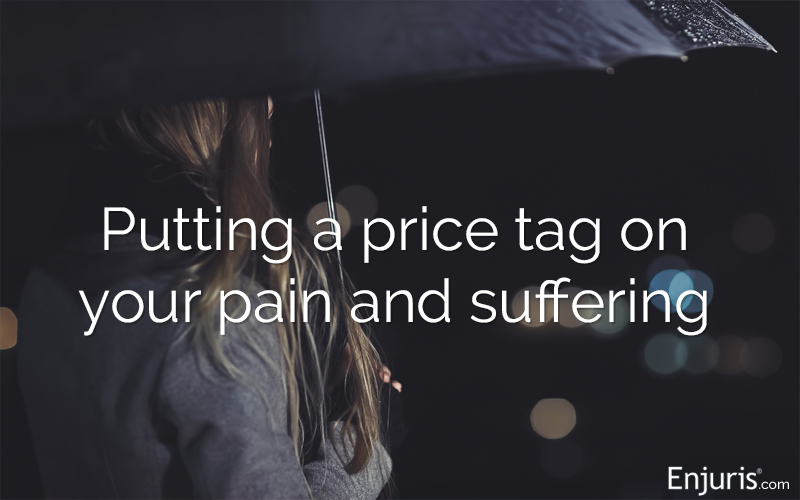 What is pain and suffering, and how do you make sure you’re compensated fairly in the Hoosier State?

The purpose of personal injury lawsuits is to compensate victims for their losses. In most cases, this includes reimbursing victims for medical expenses, lost wages, and property damages.

But what about the physical and emotional distress victims may experience?

In Indiana, plaintiffs can recover pain and suffering damages.

Let’s take a closer look at what this means.

What types of damages are available in Indiana?

In Indiana, there are 3 types of damages a plaintiff can recover in a personal injury lawsuit:

Enjuris tip:
In addition to medical expenses and lost wages, plaintiffs in Indiana can recover damages associated with the pain and suffering they experience as a result of an accident.

What is pain and suffering?

There are 2 “kinds” of pain and suffering:

Let’s say you’re involved in a car accident just outside of Indianapolis that results in multiple leg fractures. It takes you a year to recover from the accident. During this year, you’re bedridden and in extreme discomfort. On top of that, you’re unable to participate in the outdoor activities you loved before your injury. As a consequence, you become depressed and start taking antidepressants.

Your economic damages will cover the medical costs associated with repairing your leg fractures, but the other problems (physical discomfort and depression) constitute “pain and suffering” for which you can also be compensated.

How much is my pain and suffering worth?

When determining how much a plaintiff should be reimbursed for medical expenses, a jury simply needs to look at the medical bills and add them up. Pain and suffering damages are generally more difficult to calculate because there is no objective price tag.

As the Indiana Court of Appeals explained in a 2001 case:

“An inescapable reality of the pain and suffering conundrum is that...
there is no market price.”

As a result, jurors are given “wide latitude” to determine an appropriate amount of pain and suffering damages and a court will not reduce the amount awarded unless it is “manifestly excessive.”

When deciding how much compensation should be awarded, jurors generally consider several factors, including:

Jurors are, of course, human, and therefore factors like the likeability of the plaintiff and the gruesomeness of the injury often factor into the final decision as well.

Jerry Stanton was a truck driver for Gateway Freightliner Corporation. Before leaving a Kroger distribution center, he parked his tractor-trailer beside a parked trailer and got out for a break. In the meantime, a Kroger employee, Ira Ritter, began backing a tractor toward the parked trailer. Unaware that Ira was moving toward the trailer, Jerry walked between Ira’s backing tractor and the parked trailer.

Jerry suffered massive injuries when he was pinned between the tractor and the trailer.

At the conclusion of the trial, the jury found that Ira was 80% at fault and Jerry was 20% at fault for the accident. The jury awarded Jerry $55 million in damages, much of which was for the pain and suffering he experienced as a result of the accident.

Kroger filed an appeal asserting that the damages were excessive.

In holding that the damages were not excessive, the court of appeals pointed to the “wide latitude” jurors have to determine the amount of pain and suffering damages they feel are appropriate.

The court also pointed to a number of factors that weighed in favor of a large damage award, including:

Insurance companies and attorneys often estimate pain and suffering by using a multiplier between 1 and 5 (the more severe the injury, the higher the multiplier).

For example, let’s say you’re in a car accident and sustain a traumatic brain injury that results in $1 million in medical expenses. Because a traumatic brain injury is considered a “severe” injury, it would receive a multiplier of 5. This would put your pain and suffering damages at $5 million (and your total damages would be estimated at $6 million).

This is, of course, only a starting point. The number can go up or down depending on the factors discussed above.

Enjuris tip:
Although Indiana doesn’t cap damages for pain and suffering specifically, it does cap claims against the state at $700,000, and medical malpractice claims at $1.8 million.

What documentation do I need to support my pain and suffering claim?

The more evidence you have to support the impact of your injury on your life, the better chance you have at recovering the pain and suffering damages you deserve.

Do I need a personal injury attorney?

An experienced personal injury attorney near you can help gather evidence, including testimony, and present it effectively to an insurance company, judge, or jury. In addition, an attorney can review similar cases to determine what amount of pain and suffering damages you should expect.

If you believe you have a claim that warrants pain and suffering damages, use our free online directory to locate an experienced personal injury attorney in your area.