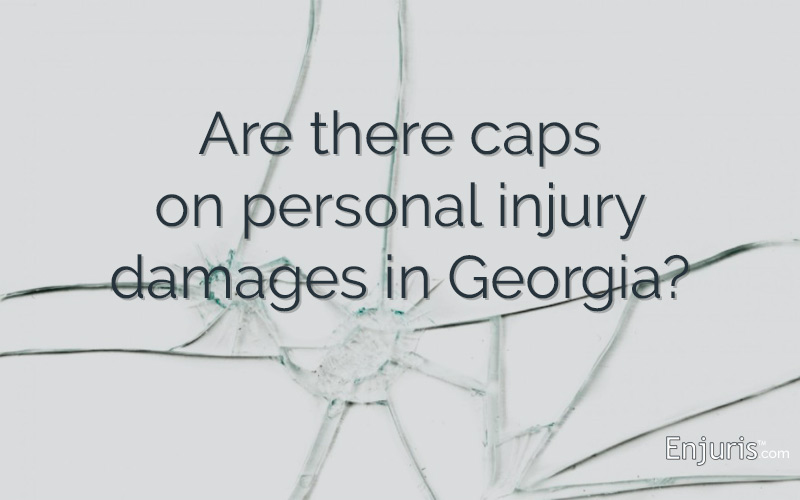 Does the Peach State place limits on personal injury settlements and judgments?

Table of Contents + show
Does the Peach State place limits on personal injury settlements and judgments?
Types of personal injury damages
What are damage caps in Georgia?
Modified comparative negligence in Georgia
Need some help?
Georgia has a storied history with damage caps, which were ruled unconstitutional in 2010 by the state Supreme Court. However, there are still some limits on what personal injury plaintiffs can recover. What are they, and how do they affect settlements and judgments? Get all the information you need here.

Personal injury victims often have difficulty covering expenses after an accident. The good news is they have the right to pursue compensation after being injured. This includes economic and non-economic damages, ranging from medical bills (economic) to pain and suffering (non-economic).

There used to be statutes in Georgia limiting the amount of money a plaintiff could receive. These limits are called “damage caps,” mentions of which arise during election years. This is because tort reform is a hot political topic, and many candidates declare they will either institute more tort reform (i.e., damage caps) or abolish them.

Awards in personal injury lawsuits are made up of economic and non-economic damages. There used to be damage caps in Georgia. Tweet this

While there are some limits on recovery in Georgia, they aren’t technically damage caps — and the most restrictive of the caps has been abolished by the state’s Supreme Court. Let’s examine the history of damage cap limits and how they might affect your potential settlement or judgment. 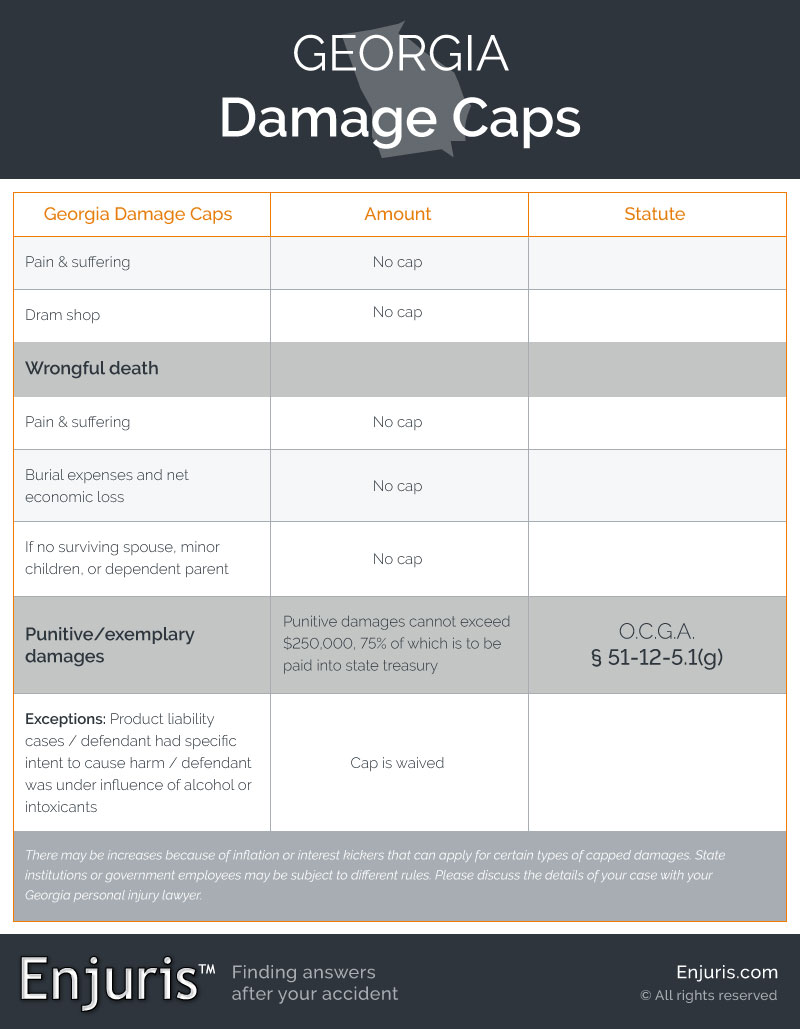 “Damages” are what plaintiffs receive either as a settlement during negotiations or as a judgment after trial. It’s important for victims to keep track of their damages, which is why we suggest keeping an expense log for your case. Download our free log template here:

There are three main categories of damages in Georgia.

Economic damages represent that which can be objectively verified, such as monetary losses. Examples include:

Non-economic damages are subjective and by their nature more difficult to quantify. They don’t have a set dollar amount, and they’re usually decided by juries, insurance adjusters or a judge.

Enjuris tip: The subjective nature of non-economic damages makes them difficult to calculate. Read more about how these damages are usually calculated.

As you can imagine, assigning a monetary value to something like “my husband’s companionship” or “my wife’s pain and suffering after a devastating car accident” is a difficult task. A jury, being the “fact finder” in a courtroom, often relies on its own beliefs as to what these damages should equal, and the results can be wildly different from one jury to another. For this reason, hiring an experienced personal injury attorney is an important first step.

Punitive damages are awarded only in specific circumstances, such as drunk driving accidents, as they are meant to deter future conduct or punish a defendant. When a case is rife with wrongdoing, a judge may want to set an example for other defendants committing similar offenses.

What are damage caps in Georgia?

Georgia abolished damage caps on pain and suffering in medical malpractice cases in 2010. They were originally enacted by statute in 2005, but the case Atlanta Oculoplastic Surgery, P.C. v. Nestlehutt et. al. did away with them after the court decided the cap was unconstitutional. Their reasoning focused on the constitutional right to a trial by jury; by limiting damages, the jury’s role as the finder of fact was essentially nullified.

As of this writing (July 2018), there are no damage caps on personal injury settlements or judgments in Georgia. However, there’s an exception regarding punitive damages. There is a $250,000 limit on this type of award, unless the case involves product liability or an intentional tort (for example, when a defendant acted with malice as opposed to mere negligence).

Additionally, in cases where the defendant was under the influence of drugs and/or alcohol, that cap limit doesn’t apply.

Despite their name, wrongful death cases technically aren’t criminal in nature and therefore focus on calculating the value of life cut short because of negligence or other negligent conduct where a person died because of someone else’s reckless or careless behavior. This death can happen because of any type of incident: medical malpractice, car accidents, drowning, bicycle accidents, workplace accidents, etc.

Georgia passed their wrongful death statute more than a century ago, as this type of offense doesn’t exist in common law (i.e., the body of law created by English judicial precedent and custom, after which Americans fashioned their own laws). While there are no damage caps for wrongful death lawsuits in Georgia, there are guidelines regarding how damages are calculated.

Damages sought must be for the beneficiaries of the deceased, and damages must relate to the deceased’s injury or death. Specifically, a beneficiary can try to recover the following:

Determining someone’s “full value of life” is quite difficult, given that it’s considered an abstract and subjective concept. Naturally, the courts offers their interpretation: There’s an economic component (the present value of the decedent’s future earnings that would have been earned over his normal life expectancy) and the non-economic component (intangible elements to be determined by a jury).

Again, that’s not much to go on. That’s why past jury awards have reached $30 million (and $10 million for pain and suffering), as in the example of the wrongful death of a four-year-old boy when his parents’ Jeep Grand Cherokee burst into flames after a rear-end accident. The Georgia Supreme Court affirmed that judgment, and Chrysler ended up paying.

Cases against the government

Unlike many other states, Georgia allows cases to proceed against government employees who injured someone during the course of their employment. This is called the “waiver of sovereign immunity” and it basically means that government employees can be held liable for all normal torts, just as a private member of the public would. However, there is a cap limit in these types of cases — damages cannot exceed $1 million per occurrence, or $3 million total.

Even though damage caps have been struck down in Georgia, the legal theory of modified comparative negligence has the potential to affect any award you receive.

Enjuris tip: A good Georgia lawyer can help you, no matter what type of case you have. Learn more about what an attorney can do for you.

Modified comparative negligence applies when a defendant isn’t entirely at fault for your injuries. For instance, say you were jaywalking and got hit by a car. Technically, you shouldn’t have been jaywalking. The jury will assign a percentage of fault to each party, and if your fault is 50% or more, you will not recover any damages. This means you can be 49% responsible for your own accident, but you can still recover against the defendant.

A lawyer who specializes in personal injury cases is your best bet to help you understand what damages you might receive because of an accident. If you haven’t found anyone to represent you, browse the Enjuris law firm directory to find an experienced attorney who will be able to help you through this complicated process.