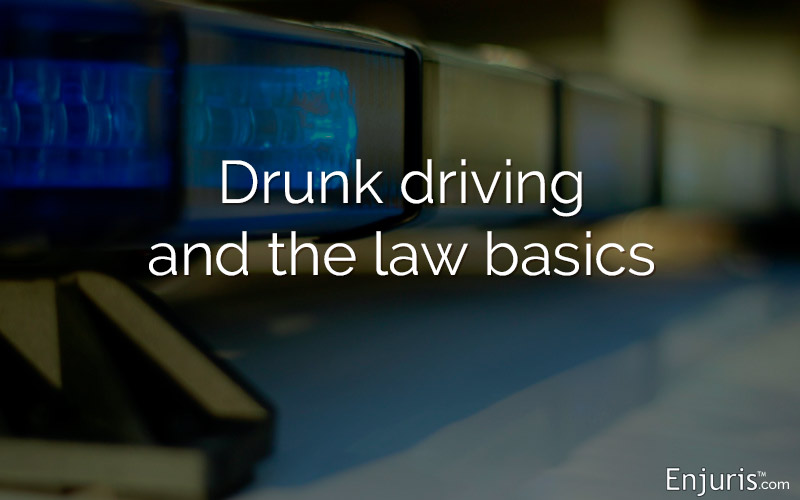 Table of Contents + show
Whether you’ve been a drunk driver or you were hurt by a drunk driver, it helps to understand the basics of how the law works
Drunk driving basics
Criminal penalties and what this means for driving privileges
What are my rights in this sort of situation, if I’ve been stopped for drunk driving?
What if I was hit by a drunk driver? Some questions answered

The first automobile accident ever happened in Ohio City, Ohio, and the driver wasn’t even intoxicated.

James William Lambert managed to hit a tree root and cause the car to careen out of control. There were no other cars around him at the time, he had no intoxicants in his system and there were no other factors to interfere with his driving. He literally just hit the one thing in Ohio that he could find to cause his car to crash.

These days, people find ways to increase their chances of injury and death. They drink and drive; they smoke marijuana and drive; they talk on cell phones or text and drive; basically, they do lots of things while driving that they shouldn’t.

According to the Center for Disease Control and Prevention, 9,967 people were killed in 2014 because of alcohol-related driving accidents, which accounted for almost one-third of traffic-related deaths in America. Additionally, more than 1.1 million drivers were arrested for driving under the influence of alcohol or narcotics.

Now that marijuana is becoming legal in more states, 13% of weekend, nighttime drivers are found to have it in their systems.

The key statistic that everyone seems to remember at parties is that drivers shouldn’t have a blood alcohol content (BAC) of more than 0.08 grams per deciliter (g/dL) or higher. However, it is far more complicated than this.

Every state has its own drunk driving laws that have various names:

These say that an operator of a vehicle cannot be under the influence of alcohol, medications, illegal drugs or even over-the-counter medications if that driver is intoxicated to a level above established government standards, which for all states is now 0.08 g/dL. This is the equivalent of approximately four alcoholic drinks.

Police officers will occasionally make vehicle stops under the suspicion that a driver may be intoxicated. He or she will make the driver perform a field sobriety test and may also ask permission to perform a chemical test for intoxication.

These tests normally involve an officer asking permission to perform tasks that assess impairment of the driver’s physical and cognitive awareness. These sorts of things include walking in a straight line (heel-toe), standing on one foot while counting aloud, and following a pen with his eyes so the officer can examine the smoothness of the driver’s gaze.

A chemical test can be something as simple as a Breathalyzer, which measures blood-alcohol concentration, or the driver can be brought to a hospital, where a urinalysis would be performed.

Drivers can refuse to submit to these tests, though there are consequences under the laws of “implied consent”. By signing papers to apply for a driver’s license and subsequently driving on the road, the idea is that drivers have given their consent to alcohol and chemical testing in the event that they are stopped by law enforcement.

Should they refuse to submit to such testing they will receive punishment, which can vary from state to state. Massachusetts, for example, carries an automatic six-month license suspension, though this doesn’t mean an implication of guilt in the event of a court case.

Per se and zero tolerance

So what about those people who are more than 0.08 g/dL and are caught by the Breathalyzer?

All states have laws that deem any driver “per se intoxicated” with a BAC of 0.08 or higher. This means that no additional proof of impairment is necessary. This is literally all that the district attorney needs to prosecute them for driving under the influence. The driver could be a NASCAR hero and be driving perfectly, taking those left turns all day with absolute precision, but if his BAC is 0.08, that is all the DA requires.

This doesn’t mean that a driver can’t be convicted if his BAC is less than 0.08 – a police officer could testify that the driver’s conduct was erratic, he failed the walking test during a traffic stop or he was weaving while driving, to name a few examples.

As for zero tolerance, if a driver is under the legal drinking age, these laws penalize anyone under the age of 21 who operates a vehicle with alcohol – any alcohol – in their systems.

Criminal penalties and what this means for driving privileges

Some of you might have that friend who’s been bumming rides for a while because his license has been suspended. “Just six more months,” he says, “and then I’ll get it back!”

That’s the aftermath of a DUI conviction. They carry stiff penalties that start at probation and creep upward to community service, fines and end at jail time. The penalties will vary depending on the driver’s history of offenses. Does he have a history of DUI violations? Was he driving with a child in the car at the time? Was there property damage? Was he driving a commercial vehicle? Did anyone die? Was he over the legal drinking age?

Meanwhile, in addition to criminal penalties, there will be a simultaneous impact on driving privileges. States give their motor vehicle departments the power to suspend drivers’ licenses when those drivers have been operating above the state limit for intoxication or when they refuse to submit for chemical testing. They can also impound vehicles and have the driver incur any related costs. The best part? This occurs before a DUI conviction. A driver can normally request a temporary driver’s license and argue for restoration of driving privileges in the meantime.

Many states now require penalized drivers to use a car interlock device, which measures an operator’s BAC and immobilizes the vehicle if it detects alcohol in the user. Just like the impounding of the vehicle, the driver will also have to pay for the rental, installation and maintenance of the interlock as well.

What are my rights in this sort of situation, if I’ve been stopped for drunk driving?

The police can’t single you out unless you’re driving erratically or, you know, plowing into traffic.

For something like a traffic stop, the police would have to use a neutral policy when stopping cars, like stopping every car or every fourth car. They would also need to minimize inconvenience to everyone as much as possible. They wouldn’t be able to single you out unless they had reason to believe you’ve broken the law.

Should the police stop you, be polite and respectful. Keep your hands visible, and make sure your passengers do as well. The police may ask you to step out of the vehicle in order to submit to testing, and you do have the right to refuse these tests. However, remember that refusing does come with penalties under the implied consent laws, and that those penalties might be stiff under the laws of your state.

Additionally, police officers don’t have to provide the Miranda warning during roadside questioning. The Miranda warning is the famous Law & Order quote taken from the Fifth Amendment of the United States Constitution: “You have the right to remain silent. Anything you say can and will be used against you in a court of law. If you cannot afford an attorney, one will be appointed to you.”

As such, because law enforcement officers don’t have to provide Miranda warning during roadside stops, these aren’t considered custodial interrogations. You aren’t in police custody yet. Once you’re arrested, they have to read you your Miranda rights or all of your testimony following the arrest will be excluded.

Remember, though, an officer still has eyes. He can observe you if you refuse to take a sobriety test or a Breathalyzer. If you’re stumbling around, slurring, have bloodshot eyes or are vomiting on his shoes, he’ll probably arrest you anyway.

Some states do allow you to speak with an attorney prior to a chemical test, but others do not. If you’re very unsure, it might be good to look through the Enjuris law firm directory and put one of them in your phone contacts ahead of time.

The best thing to do? Don’t drink and drive, kids.

What if I was hit by a drunk driver? Some questions answered

If you were just in the wrong place at the wrong time, don’t despair. It can definitely be overwhelming when you’ve been hit by a drunk driver, but the first step is to remain calm. Make sure that you and your passengers are okay physically, and then here’s what should happen next:

What if the driver’s too drunk to comply/what if he drives off?

Wait for the police to show up and take care of things. They’ll know what to do. Don’t try to chase him! That will only make things worse. Just try to get as much identifying information as possible.

How will I take care of my car and my medical bills?

You will either put in a claim to the drunk driver’s insurance company or, if he’s underinsured or uninsured, to your own (if you have an uninsurance policy). As the court system is split into criminal and civil cases, the district attorney for your county would pursue a driving-while-intoxicated case that would likely result in fines or jail time.

You would pursue a civil case that would result in recovering damages if you cannot get a result from the insurance company. You could also very likely pursue a dram shop case against a tavern owner or bartender if they were the ones who served the driver alcohol before he took to the streets in his car.

Again, a good attorney can help you sort through these issues. Consider speaking to one in the Enjuris law firm directory!