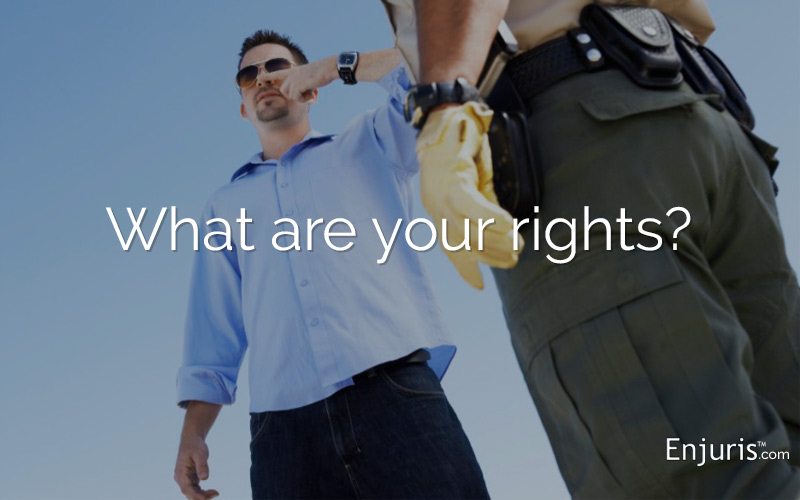 Can you refuse a roadside sobriety test?

Drunk driving accidents are a serious crime that come with serious penalties for any driver caught breaking the law. Driving with a BAC (blood alcohol content) that’s too high puts you at risk of harming yourself and everyone you share the road with.

But what happens if you cause an accident when you weren’t drunk? Perhaps you only had a beer or two, and don’t think the officer should charge you with a DUI (driving under the influence) or DWI (driving while impaired). Or maybe you suffer from Ehlers-Danlos syndrome (EDS) or another non-obvious disability.

Though the breathalyzer or blood and urine analysis tests are hard to refute, an arrest based on field sobriety tests has a better chance of being challenged. These tests are considered more subjective than other tests, and you may be able to minimize your criminal and civil penalties if your attorney can challenge the administration or results of the tests.

While Enjuris doesn’t condone drinking and driving, we also want to help give advice to readers who face DUI penalties that are undeserved. We offer this guide to help our readers whose nerves and pre-existing medical conditions may compromise their rights.

Police officers and other law enforcement agents undergo thorough training as to how to spot a drunk driver. Though relatively little research has been published, one 1998 study showed that tested police officers could identify a driver with a BAC over .08 with approximately 90% accuracy and were 80% accurate for drivers with a BAC between .04 and .08.

False positives on roadside sobriety tests can happen to 1 in 4 of drivers. Tweet this

When an intoxicated driver causes an accident, the police officer in charge will carefully assess the behavior of the driver. If you smell like alcohol or exhibit any behavior suggesting that you may be drunk, the police may ask you to perform a field sobriety test.

Roadside sobriety tests can vary, but the three standardized tests are as follows:

The horizontal gaze nystagmus test (HGN) is one that may seem impossible to fail in theory, but is actually very subjective. Here, the police officer checks your eye movements by asking you to track a pen or light with your eyes. The officer wants to see if you can follow the horizontal movements with your eyes.

If you have any eye condition such as a lazy eye or any other visual irregularity, however, it’s highly possible that the officer will get an incorrect reading.

2. The Walk and Turn Test

The walk and turn test, sometimes referred to as the “divided attention test,” checks your ability to walk a straight line. Here, the officer will ask you to walk nine steps forward, turn on one foot, and walk nine steps back. The officer is trying to assess your balance and if you need to use your arms and legs for assistance.

Being drunk or high on drugs will certainly reduce your chances of being able to pass this test, but nerves and being a bit uncoordinated can also produce a failure.

3. The One Leg Stand Test

Like the walk and turn test, the one leg stand test also checks to see if your drinking or drug use affected your balance. With this test, you’ll lift your foot approximately 6 inches off the ground and count or recite the alphabet until the officer tells you to stop. Getting the numbers or letters wrong, swaying, using your arms or legs, hopping or putting your foot down could all result in being charged with a DUI.

Nerves, lack of coordination or a pre-existing medical condition can all cause you to fail this sobriety test even if you’re completely sober.

Though the above are considered the “standardized” field sobriety tests, states also have their own rules as to which other tests can be issued. Tasks such as counting backwards from 100, saying the alphabet backwards, walking in a line and hopping are also considered admissible in some states.

You may not have many options if you fail the field sobriety tests.

Nevertheless, if your BAC was fairly low or if you believe that you failed the tests due to non-alcohol related circumstances, we encourage you to speak with a criminal defense attorney to mitigate your criminal penalties and a personal injury attorney to help you fight a potential civil lawsuit and damages.

Can you refuse to take a field sobriety test?

In many states throughout the US, a policy called “implied consent” governs drunk driving arrests. In these states, refusing to take a breathalyzer (or other breath analysis test) or refusal to provide a blood or urine sample can results in punishments such as automatic arrest and license suspension.

Field sobriety tests, however, aren’t tied to implied consent laws. Thus, you’re free to refuse these tests without legal penalty. Nevertheless, if you cause a car accident or demonstrate behavior that can be confused with acting drunk, then you may still be arrested. Similarly, you can pass the field sobriety tests and still be arrested if a police officer believes you drove under the influence of drugs or alcohol.

Protecting your rights after a DUI accident

Regardless of whether you drank too much or if you weren’t experiencing any effects of alcohol, your behavior following a car accident is extremely important. Your actions can have a direct impact on your potential criminal penalties as well as a possible personal injury lawsuit.

If you’re involved in a car accident after you had been drinking, you need to adhere to the following procedure, provided that you’re not seriously injured:

Last but not least, if you’re charged with a DUI, speak with both a criminal defense attorney and a personal injury attorney. The criminal defense attorney will assist you with the arrest and criminal penalties, while the personal injury attorney can help with a potential civil lawsuit and the damages you may need to pay as compensation. In some instances, one attorney may be able to fulfill both roles for you. We encourage you to browse our attorney directory to find a lawyer near you.