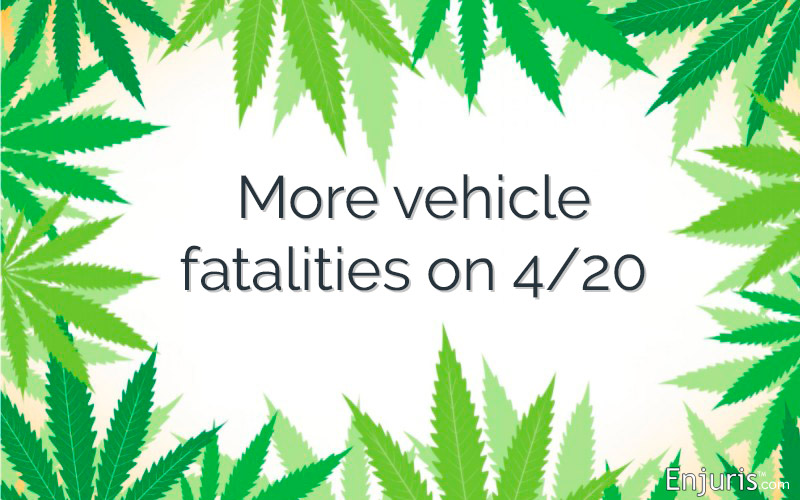 Marijuana users love a good holiday. Their self-proclaimed annual day of celebration is 4/20, or April 20th. Two researchers examined 25 years of data to determine whether the pot smoker’s holiday has resulted in an increase in car accidents. They found there are indeed 12% more fatal car crashes on April 20th. However, there is no conclusive evidence it’s due to people driving while high.

The reasons suggested for the name 4/20 vary — were officers coding pot smoking as “420”? It’s also Adolph Hitler’s birthday, some noted. However, the actual story is that in 1971, a group of high school smokers in San Rafael, California would meet at 4:20 p.m. by a statue of chemist Louis Pasteur and partake in a toke. They would use “420” as a code word to one another.

This holiday has persisted for decades. Two researchers were interested in whether the holiday, with more people potentially driving while high, coincided with increased vehicle fatalities. Dr. John Staples of the University of British Columbia and Dr. Donald Redelmeier of the University of Toronto decided to study a 25-year range of fatal April 20th car accidents, starting in 1992 and ending in 2016. Their findings were published by the JAMA Network in February 2018.

The researchers discovered that there is an increase in fatal car crashes each year on April 20th. This follows trends of other major holidays like New Year’s Eve and Super Bowl Sunday.

The study cannot directly link the rise in fatal crashes to marijuana use. But consider that sales in marijuana spike on that day - and there is a 12% increase in fatal car crashes. It doesn’t seem like quite a leap to think that the greater number of accidents could be caused by celebrators driving while high.

There were 1.3 million drivers involved in 882,483 crashes, which caused 978,328 fatalities. A total of 1,369 drivers were in fatal car accidents after 4:20 p.m. on April 20, while 2,453 drivers were in fatal accidents on control days during the same intervals. There were calculations involved when determining which day had higher risks, but suffice it to say that April 20th was significantly higher.

This increase in risk was particularly noticeable in younger drivers, and the states most at risk were Texas, New York and Georgia. Only Minnesota stood out as a reduction in risk.

Driving while high - what does marijuana do to drivers?

The National Institute on Drug Abuse led a federal research study on the effects of marijuana on driving abilities. Because THC can stay in the system for weeks, there is no reliable roadside test for police officers; they can only detect whether THC is present, not when the person used it. According to the most recent survey from the National Highway Traffic Safety Administration on weekend nighttime drivers, 12.6% tested positive for THC, which is an increase from 8.6% in 2007.

The study used 18 occasional cannabis smokers between the ages of 21 and 37. University of Iowa researchers put participants into a driving simulator (a hot 1996 Malibu sedan placed atop a dome). They tested each drive with a different combination of THC, alcohol and placebos to look at the effect of driving while high.

They focused primarily on whether drivers weaved within a lane, the number of times the car left the lane, and how fast they were weaving. These are all top indicators of impaired driving, especially with alcohol. While marijuana did show an increase in weaving (with 13.1 ug/L THC being comparable to 0.08% blood alcohol concentration), it did not affect the number of times a car left the lane or speeding. To be clear, 13.1 ug/L THC is far more than the 5 ug/L limit that Colorado imposes by law.

The researchers were also attempting to determine how long it takes for THC levels in blood to drop, since officers testing a drugged driver often must wait until hours after a driver is taken off the road, which can mean varying levels of THC.

Marijuana can also do the following to those driving while high:

Two large European studies found that drivers with THC in their systems are approximately twice as likely to be involved in a fatal crash as drivers who had not ingested drugs or alcohol. This can rise to three or even seven times more likely for drivers with high levels of THC from marijuana. When combined with alcohol, highs are more intense and make someone driving while high even more dangerous to others.

If you or a loved one have been hurt in a car accident that involved marijuana, you are going to need an attorney who knows Colorado’s DUI laws. Email me here if you need a Denver-area lawyer who has experience with handling DUI cases and can help you.