Outdoor fun in Texas and how it can go wrong 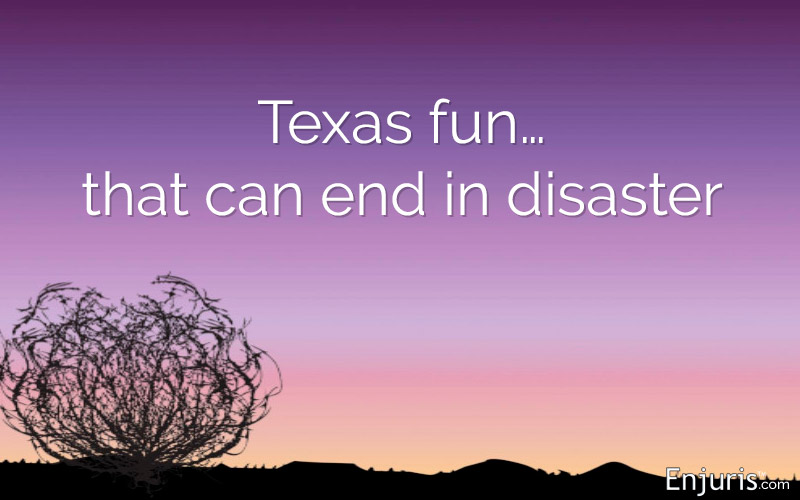 Playing outside in Texas is like an endless summer. There is a stream of activities to keep a person busy and of course, each has a way it could go terribly wrong. And we’re here to tell you how! (You’re welcome.)

Texas offers some first-rate hiking spots. From Enchanted Rock to the Palo Duro Canyon State Park, there is a trail for everybody, no matter the skill level or how much someone complains about the incline. Depending on what you want – forests, streams, crags, mountains – Texas offers it, since there are more than 150 miles of hiking trails.

How could hiking go wrong in Texas?

There are always the little injuries like twisted ankles, scrapes and heat exhaustion because of dehydration.

But what about the bigger injuries?

What if you’re far away from civilization and can’t get help? True, you could phone for help, but then you have to wait for them to find you.

There is the possibility of recovery for a personal injury case against the national park in which you went hiking, but these activities are generally at your own risk. Additionally, if you chose a guided tour, the guide more than likely had you sign a waiver of liability prior to the expedition. While these are not always iron-clad and you can have an attorney review it for loopholes, you are probably going to be paying for your own medical bills.

In terms of fishing, Texas is second only to Alaska in its volume of inland water (80,000 miles of streams and rivers). The state contains more than 100 lakes, and has more than 400 miles of coastal bays and shorelines. There are 70 state parks that waive fishing license requirements for families and some will even provide loaner equipment. Heck, they’ll even offer you bait.

As for hunting, there’s an animal for every type of hunter out there:

How could hunting and fishing go wrong?

Well, here’s how. Then-Vice President Dick Cheney was hunting in Texas when he shot his hunting partner in the face while searching for quail. (News stories don’t indicate whether Whittington, the victim, sued Cheney’s insurance company for personal injuries.) So, there’s that.

Every year, Texas Parks & Wildlife publishes an updated “Texas Hunting Incidents Analysis” to keep track of who is injured or killed while hunting in the state. As of 2016, the most recent year for which data is available, there were 81 accidents in total with 28 fatalities and 53 non-fatal injuries. According to the data, fatalities and injuries have been on a downward clip in recent years.

As for fishing, this is generally considered a safer activity, though accidents can still happen. If you’re fishing in a boat, you can become unanchored and succumb to strong weather, as happened to these poor men in 2017. If you’re fly-fishing, most people think the highest risk is getting caught by the hooks – but people have actually died. Yes, we know that sounds unlikely, but if you’re in water more than a couple inches high, then you can drown. In that linked story, a fly-fisher slipped on a fish and fell backward, hitting her head and drowning. She also grabbed her partner and brought him with her, both swept away by the rushing water.

Their estate could theoretically bring wrongful death suits against the tour company with which they were fishing.

Texas loves mountain biking. It’s a great way to get around and see the scenery, especially the Crested Butte and Moab. There are more than 175 listed trails, from sandy beaches near glorious blue water to single-track mountain descents with curious lizards. Best of all, it’s free!

How could mountain biking go wrong?

If you are a private biker who just enjoys the thrill and happen to get hit by a car, then that driver will pay for your medical bills.

If you wipe out on a mountainside, who do you sue if you get hurt there?

If you rented your bike from a shop that touts mountain biking challenges, you might be able to recover damages, but if you’re a private mountain biker who just enjoys the challenge, you will probably be paying your own medical bills.

Endurance challenges can cause a lot of other physical problems such as cramping, extreme dehydration, bleeding and heart problems. And with mountain biking, the ramps allow riders to jump eight feet into the air and soar distances of more than 10 feet.

When a biker rides down a slope and gets hurt, that could potentially mean a personal injury claim for negligence against the owner or manager.

No matter what type of outdoor terrain you want, Texas has it. Coastline? The bay? Bayous? Saltwater marshes? Mountain mesas? Look no further. Like its own miniature Earth, it seems every landscape possible is contained within this state.

How could backpacking and camping go wrong?

Do you like grizzly bears? No? Well, mountain lions are cute. Harming any of these animals would likely be an environmental and administrative violation, and probably a governmental violation as well if the Texas Parks & Wildlife Department got involved. Plus, you wouldn’t be a friend of animal rights activists. (There is such a thing as animal law, too, and since there is very little monetary reward in animal law, you will find some of the most passionate lawyers in existence.)

There are also 100-foot falls, lightning strikes… you get the idea.

Again, these are “at your own risk,” so you won’t find anyone to sue.

Texas has some solid options for boating and river rafting. There’s everything from calm kayaking to eco tours, roaring rapids to paddling. Some combine them with fishing, so there’s something for everyone.

How could this go wrong?

Well, you could always drown. Kids can drown in two inches of water.

Drowning accidents usually fall under maritime jurisdiction, though it depends on where the accident occurs. If it happens close to shore, then state law applies and normal personal injury law is used. If the accident is farther from shore (for instance, if this were deep-sea diving or if a worker falls off an oil rig way out at sea), then federal maritime law applies.

Horses are glorious, beautiful creatures that can allow you to feel more connected to the land while still seeing a lot of real estate at the same time. Visit a legitimate dude ranch and get the whole experience, or just saddle up and go for a ride into a gorgeous, endless sunset. Travel back in time to when you wanted a horsey of your own and live out your dream to your heart’s content.

How could horseback riding go wrong?

Horses are living animals, and they can make decisions independent of yours. Can they sense your fear? Studies show they can. They can rear back and buck you off, throwing you to the ground and causing severe injuries. Even just riding them as intended can cause spinal issues, concussions or even death.

If you’ve been injured on a trail ride, you may have grounds for a personal injury suit against the ranch.

Leave the Earth’s surface behind and go underground to visit the Magnificent Seven. This is the Texas Underworld, and they boast some of the coolest commercial caves in the country:

How could caving go wrong?

Getting stuck underground, for one. While a lot of these caves have wide paths, some of them are narrow shafts that require special equipment to navigate.

Cavers can get trapped and injured from away from medical attention, leading to personal injury suits against the government – which have a different, shorter statute of limitations than normal personal injury claims – and could even lead to wrongful death claims.

Because of the “assumption of risk” (meaning that people know how dangerous it is when they go into a cave), the likelihood of winning any claims is close to zero.

However, interestingly, if a private owner of property owned a cave, charged admission, knew of dangerous conditions within the cave and did not warn cavers, he could be held liable for injuries.

The protection hinges upon whether the owner charged admission.

So there you have it. A list of all the wonderful and dangerous activities you can find to do in Texas – and who to sue if something goes wrong. If you would like to speak with an attorney in Texas, get started with our lawyer directory here.