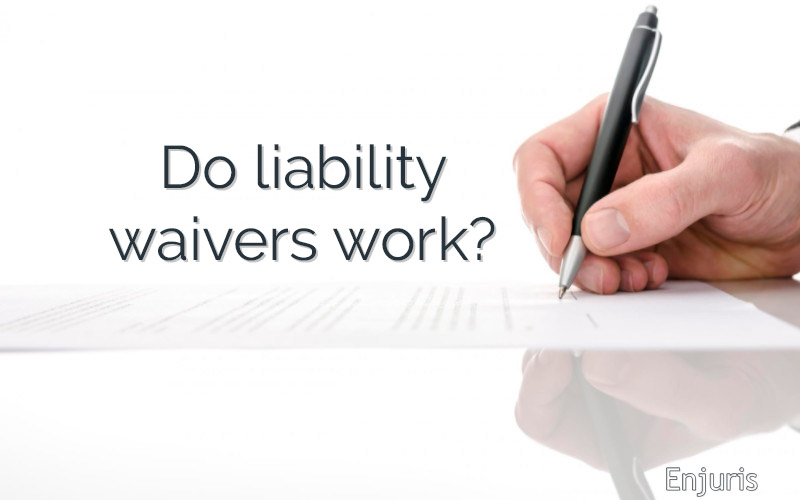 Just how strong are those documents, really?

Table of Contents + show
Just how strong are those documents, really?
But I didn’t really agree to that. Did I?
When will a waiver be upheld by the courts?
Do disclaimers work everywhere?

When you sign up for a gym, before the staff locks you into an eternal month-to-month membership or an annual contract, they will have you sign a crucial paper: a waiver or disclaimer of liability.

“Yeah, sure, whatever,” you say. “I’ll sign it. Whatever gets me closer to those sweet gains, bro!”

Some people give this paper a quick skim, but most sign it without reading.

It’s generally unavoidable, as you can’t get the gym membership without signing that disclaimer.

However, what you’re agreeing to is that the gym will not be responsible for any injuries that you incur while on their premises while using their equipment. That is to say, you can’t sue them for any personal injuries, and YOU are assuming the risk of the activity.

You will see liability waivers in use for most activities that carry some risk, like scuba diving, horseback riding, rafting, rock climbing and so on.

A rose by any other name

Want to know how many other ways you can say “disclaimer of liability”? (It might as well be running from the law with all these known aliases!)

But I didn’t really agree to that. Did I?

Even though lawyers aren’t present when you sign and you did not go to a law office, that document is a contract and you are expected to read it before you sign. That is why they require you to both print and sign your name. These can even be signed and bound on behalf of minors in some states.

The strength of these contracts, however, depends on how well they are used in conjunction with other methods of negligence prevention.

To give that statement a bit of context, imagine you’re baking a pumpkin pie. You remember the pureed pumpkin, of course – the eggs, the condensed milk, the spices – you whip it all together, pop it in the oven, let it cool, take a long-awaited bite… and then spit it out in disgust.

You forgot the sugar.

There are times when you can still sue if you've signed a waiver. Tweet this

Like sugar, liability disclaimers are imperative – but their usefulness is tied to other methods (see more on this below).

A waiver is an exculpatory contract. That means it’s used to excuse a party from responsibility when the other contracted party is injured by either known or unknown risks in a particular activity. This includes inherent risks and ordinary negligence.

These documents are interpreted by the courts according to contract law principles, so the way they are written is crucial. A misplaced clause or comma can bring the whole argument crashing down.

When will a waiver be upheld by the courts?

A waiver of liability (AKA a release or disclaimer) will be upheld if the following is found to have occurred:

Sometimes the courts will discuss “known and unknown risks,” as well as inherent risks of an activity.

That’s because one simply cannot account for every risk before disclaiming liability. For instance, in the case of Vinikoor v. Pedal Pennsylvania, Inc., Mr. Vinikoor was injured during a bike race because of alleged grooves in the track that caused his bike to overturn, which in turn caused him serious injuries. Pedal Pennsylvania produced the waiver Mr. Vinikoor had signed prior to the race, which disclaimed them from any and all liability related to injuries. It also stated that they had completed their due diligence, searching the course for pot holes and other visible hazards to racers prior to the start of the race, and had distributed a course map with marked areas of trouble.

The second part is what protected Pedal Pennsylvania from a judgment against them.

The court held that the waiver was valid and enforceable because the organization had a clearly-worded, unambiguous disclaimer; a signature from the person attempting to accuse them of gross negligence; and solid supporting evidence (the route map that identified hazards).

However, it doesn’t always work out this way.

In the state of Wisconsin, for example, decisions are routinely overturned that decide for organizations and disclaimed liability. The courts have stated that upholding liability waivers are not in the public interest, as boilerplate, standard waivers are generally overbroad and all-inclusive, which disclaims organizations from everything, even simple negligence.

No. Naturally, every state is a little bit different. (See which states do not support releases.)

For instance, disclaimers are entirely void in Virginia, Montana and Louisiana, though their use is restricted in Arizona, New Mexico and West Virginia. This means that a contract which is entirely unenforceable in Montana could theoretically be used in Arizona, though it would have to be drafted very well.

The courts will look at every aspect of the contract. Was there conspicuous language? Were the injuries extreme? Was there unequal bargaining power? Were there inherent risks to the activity?

In the end, it all comes down to the language of the contract, the foresight of the organization and the nature of the accident.

Was it an injury that was anticipated by the agreement? Or was it an act of gross negligence for which the organization should have been prepared, but was not?

If so, the courts will likely hold the disclaimer unenforceable.

However, if the contract is well written and the organization disclaiming liability took steps to protect itself (e.g., identifying known dangers, like in the Vinikoor case mentioned earlier), then the claimant will probably not prevail.