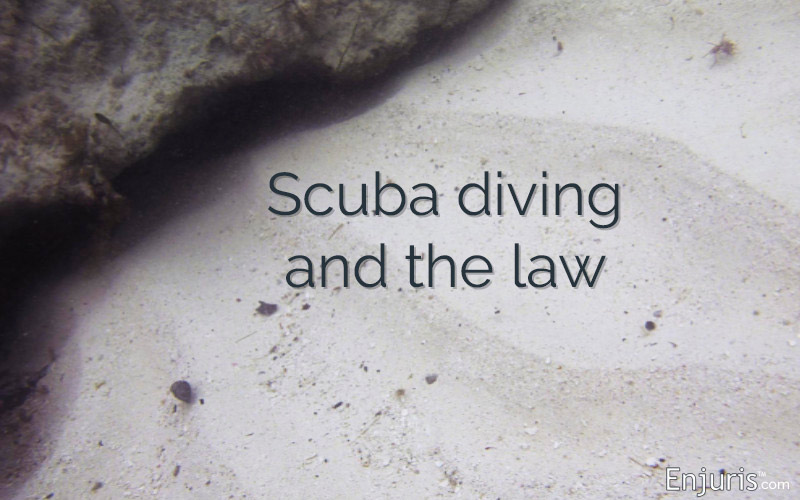 Accidents, injuries and deaths while diving – who is responsible? Is there an increase in lawsuits?

Table of Contents + show
Accidents, injuries and deaths while diving – who is responsible? Is there an increase in lawsuits?
How scuba diving can go wrong
What about waivers and scuba diving?
So, what can scuba divers do?

Some may think that also means a lot of potential danger. For instance, CBS Miami has its own tag regarding scuba divers that just reads “scuba diver death” for this category of stories.

Depending on who you ask, scuba diving is a fairly safe sport when safety “standards“ are adhered to. But insurers tend to lump scuba diving in with motorcycle riding, skydiving, mountain climbing and other activities that can increase your premiums.

The Diver's Alert Network (DAN) gives some perspective on the risk of death for scuba divers in its Recreational Diving Fatalities Workshop Proceedings in Durham, North Carolina:

Using these estimates and DAN fatality records, DAN expects the death rate among U.S. divers may be estimated at 3-6 per 100,000.

“While there are inherent risks to scuba diving, the fatality rate is extremely low when compared to other activities and litigation in the industry is not common," says William Ziefle, president and CEO of DAN. "While, historically, DAN focused on incident prevention – and we will continue to do so – the organization recently introduced a new professional liability insurance program. As time progresses, I’m sure this program will give us new insights into dive accidents that will further help DAN’s outreach efforts to educate both divers and the dive industry on incident- and injury-prevention.”

Undercurrent.org, an online guide for divers, has noticed an uptick in scuba diving lawsuits. The website notes in an article about big dive lawsuit payouts:

“Seems like settlements for dive-related lawsuits are happening more often, and the payouts are growing. In our April [2015] issue, we reported on the $7.8 million settlement for professional underwater photographer Michael Prickett, who was bent on a shoot in Rangiroa. It was the largest to date. That has now been surpassed by a $12 million settlement for a father and son who suffered severe head injuries when struck by a dive boat's propellers on a Florida Keys dive in 2011.”

While deaths during scuba diving activities are uncommon, they do happen. And whether lawsuits are increasing or not, we thought it would be helpful to take a look at the most common ways that scuba diving accidents occur, framed in the context of legal liability.

How scuba diving can go wrong

Though training and safety procedures are designed to mitigate risks, the worst still happens on occasion. DAN summarizes the most common causes of scuba diving fatalities:

The principal injuries or causes of death included drowning or asphyxia due to inhalation of water, air embolism and cardiac events. Older divers were at greater risk of cardiac events, with men at higher risk than women, although the risks were equal at age 65 (Denoble, Pollock et al. 2008).”

So, how does the law get involved?

Drowning accidents fall under maritime jurisdiction, depending on where the accident occurs. If it happens close to shore, then state law applies and normal personal injury law is used. If the accident is farther from shore (for instance, if this were deep-sea diving or if a worker fell off an oil rig way out at sea), then federal maritime law would apply.

He explains, “The difference between this and other no-certification dive experiences is that this program guarantees that you’re working with a safety-focused, verified PADI operator and you’ll have an instructor close by every step of the way. We don't recommend signing up for a no-certification experience with an operator that you’re unable to vet.”

Sport Diver magazine also provides an intro to everything you need to know to get started with scuba diving at ScubaDivingIntro.com, including how to get your open-water certification right away.

What about waivers and scuba diving?

Scuba divers participating in a dive or course often must sign a waiver. Standard language includes a waiver of the right to sue the party offering the service, even if the worst should happen.

But do waivers stand up in court?

The South Pacific Underwater Medicine Society (SPUMS) reports that it does, even in the case of a negligent diving instructor.

The case of Ken Sulejmanagic, a 19-year-old diver who died during a YMCA scuba diving certification course in California, drives home the point that waivers are indeed legally binding.

When you sign a waiver, you are entering into a contract of your own free will that will, in most cases, be upheld in court.

Do waivers hold up in court?

Have you ever wondered if waivers stand up in court when something goes wrong and it was clearly the fault of the dive company? They do.

See here the wording used in the waiver signed by Sulejmanagic, which prevented his parents from winning a wrongful death suit for the negligence of his instructor. Look familiar?

For and in consideration of permitting (1)...............to enroll in and participate in diving activities and class instruction of skin and/or scuba diving given by (2)................the Undersigned waives and relinquishes any and all actions or causes of action for personal injury, property damage or wrongful death occurring to him/herself arising as a result of engaging or receiving instructions in said activity or any activities incidental thereto wherever or however the same may occur and for whatever periods that activities or instructions may continue, and the Undersigned does for him/herself, his/her heirs, executors, administrators and assigns hereby release, waive, discharge and relinquish any action or causes of action, aforesaid, which may hereafter arise for him/herself and for his/ her estate and agrees that under no circumstances will he/she or his/her heirs, executors, administrators and assigns prosecute, present any claim for personal injury, property damage or wrongful death against...............or any of its officers, agents, servants or employees for any of said causes of action, whether the same shall arise by the negligence of any of said persons, or otherwise. IT IS THE INTENTION OF (1)...............BY THIS INSTRUMENT, TO EXEMPT AND RELEASE (2)...............FROM LIABILITY FOR PERSONAL INJURY, PROPERTY DAMAGE OR WRONGFUL DEATH CAUSED BY NEGLIGENCE

During the course of his dive, Sulejmanagic ran low on air. Rather than ending the dive, the instructor told him to swim toward a dive buoy while he returned to the bottom to continue with another diver. Sulejmanagic was missing when the instructor resurfaced later.

Sulejmanagic’s parents sued the YMCA and the instructor for the wrongful death of their son.

In the end, the California appellate court determined that the waiver was sufficient to protect the YMCA and instructor from being held responsible for their negligence.

Though the instructor was clearly negligent, the waiver stood up against a wrongful death lawsuit brought on his behalf because he signed the waiver when he joined the certification course:

“Here, Ken certainly had the option of not taking the class. There is no practical necessity that he do so. In view of the dangerous nature of this particular activity defendants could reasonably require the execution of the release as a condition of enrolment. Ken entered into a private and voluntary transaction in which, in exchange for enrolment in a class which he desired to take, he freely agreed to waive any claim against the defendants for a negligent act by them.”

However, as we see in the case of Diodato v. Islamorada Asset Management, Inc., the wording of the waiver can have bearing.

When Aviva Diodata arrived to participate in a recreational dive in Monroe County, Florida, she was already late, so the instructors let her board without signing the required waiver.

At an early point in the dive, she was separated from the boat and not found until it was too late.

Aviva’s husband brought a wrongful death suit, and the dive company argued that waivers she had signed with them on previous dives should also cover this particular dive. This held up in a summary judgment but was reversed by Third District Court of Appeals.

The Court of Appeals found the language addressing the scope of the releases she had signed at earlier dive events ambiguous. In addition, the earlier dives she had participated in were of a different nature than the fatal deep-water dive.

In the end, the waivers were not upheld.

So, what can scuba divers do?

If there is any lesson to learn from the actions of others, it’s to always take safety seriously: Pursue proper certifications, confirm that others around you are adhering to accepted standards, and understand the responsibility you are accepting when you participate in diving activities.

Divers can take it one step further by equipping themselves with gear that can make it easier to be found if separated.

Undercurrent.org advocates for all divers to carry a surface marker device such as a buoy, a flag on an extendable pole, a flashlight, a personal locator beacon or a combination of all such safety devices to make location of a solitary floating person more easily found in the vastness of the ocean, according to Bantin.

Torben Lonne, editor in chief at DIVEIN.com urges divers to always use a checklist. He says, "While most of us are probably able to remember safety procedures for diving if we are prompted, some points can slip our minds once we find ourselves at the dive site, perhaps early in the morning, and excited about commencing the dive. Checklists in diving can be used to ensure that all the steps are followed in equipment review and assembly (especially when diving with equipment that you use infrequently), the dive plan, and the backup or emergency plan."

Would you like to speak with an attorney about a scuba diving accident or share your story with our readers?