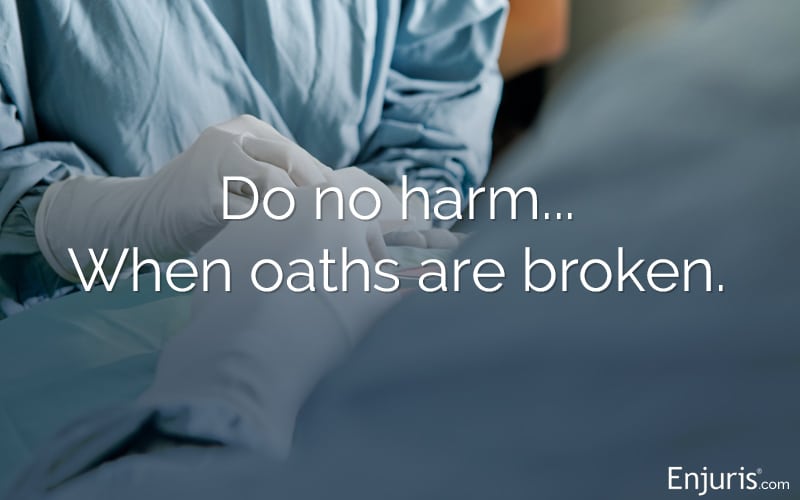 Medical malpractice is when a doctor or other medical professional negligently makes a mistake that results in injury or illness to a patient.

If a plaintiff (the patient) suffered an injury because of a doctor’s mistake, they might claim that:

Some common medical malpractice claims include:

If a medical accident or mistake does happen, it can result in devastating and life-changing injuries.

Medical malpractice lawsuits are among the most complex, difficult, and heart-rending cases in the legal system.

Often, a medical malpractice claim results in a very high verdict or settlement. The reason is because living is expensive. A person who has a disability or illness has a lifetime of costs. In addition to the regular costs of living (housing, food, etc.), they might not be able to earn a living and therefore have no source of income.

The patient could also have additional needs like adaptive devices, ongoing therapies, continued extensive medical treatment, modifications to their home or car, special school or tutoring, and other costs that add up quickly.

So, while you might see a lot of zeros in these verdicts and think they seem excessive, they are actually carefully calculated amounts that have been negotiated and counted to exactly compensate a plaintiff for their costs, including pain and suffering and emotional distress if necessary.

Let’s take a look at the largest verdict amounts for medical malpractice cases in 2019:

Enjuris tip: Byrom v. Johns Hopkins Bayview Medical Center is frequently cited as having the highest verdict amount in 2019 after the court awarded the plaintiff a $229 million judgment. However, the Byrom verdict was overturned in early 2021 by the Maryland Court of Special Appeals, which said that the evidence at trial was not sufficient to prove that the plaintiff received negligent treatment.

Baby Gerald Sallis suffered a brain injury at birth. Gerald’s mother, Tequila Sallis, claimed that he would not have suffered a birth injury if the medical personnel in the hospital had notified doctors of abnormalities so an emergency C-section could be performed. Gerald, now 5 years old, is expected to have a normal life expectancy, though he is not able to speak or care for himself in any way.

Patricia Jones, 67, suffered neck-down paralysis following spinal surgery. During the procedure, a monitoring signal between her brain and extremities failed to alert doctors of a blood clot. The clot resulted in damage to her spinal cord that left her paralyzed. However, her medical team told her that she had a stroke during the surgery, rather than acknowledging the mistake.

The plaintiff claimed that she would not have consented to the surgery if she’d been informed of the risks.

Dwayne Murray and his 7-year-old daughter Brooklynn filed a lawsuit against the Valley Health System hospital for the death of their wife and mother, LaQuinta Whitley Murray. They received $10.5 million in compensatory damages and $32.4 million in punitive damages.

Hospital staff administered ketorolac tromethamine (Toradol), a nonsteroidal anti-inflammatory drug to LaQuinta, who was in the hospital for treatment of pain related to sickle cell anemia, acute chronic anemia, and strep throat.

However, the medication administered was in excess of the manufacturer’s recommended dose. As a result, 29-year-old Ms. Murray suffered 5 cardiac arrests that ultimately resulted in her death.

The plaintiffs claimed that a nurse failed to properly monitor a baby during delivery. Prior to baby Aiden Boulter’s birth, a nurse was using a hand-held device to monitor his heart rate, rather than using a required continuous fetal heart rate monitor. Experts said that the nurse was actually monitoring his mother’s heart rate, rather than the baby’s. When Aiden was born, he was not breathing and had almost no heartbeat because his umbilical cord was wrapped around his neck in the birth canal. As a result, he suffered severe brain injuries.

This birth injury lawsuit reached a confidential settlement on the same day as the jury awarded a $30 million verdict. The final settlement amount was not made public, but the defendant anticipated paying about $1 million directly to the family, with its insurer covering the remaining amount.

Johnny Sledge, 24, was shot in Tuscaloosa, Alabama in 2013. He was rushed to the hospital for treatment of his gunshot injuries. However, the on-call surgeon was performing an elective surgery and did not provide the life-saving surgery Sledge needed to survive.

Sledge died after being in the emergency room for 2 hours. He required immediate surgery for his internal injuries, but a surgeon did not treat him in time. The hospital’s policy was that although the on-call trauma surgeon was permitted to schedule elective procedures at that time, they were required to have another surgeon available to fill in. The surgeon completed the first elective procedure and began a second elective procedure while Sledge was still awaiting treatment in the ER.

As Sledge was being transported to the hospital, the emergency responders called in a trauma alert to the emergency department. The surgeon was alerted and asked to respond to the ER, but he said he was busy and the staff should call someone else. The hospital was not able to find another surgeon and surgery was necessary. When the on-call surgeon was paged a second time, he suggested transferring Sledge to another hospital. Sledge died while waiting for a surgeon.

Lilia Torres was a mother of 3 and died from avoidable complications during the birth of her fourth child. Torres had a condition that was known to her medical team and she had a scheduled C-section. Torres had placenta previa, which had been diagnosed prior to childbirth and was managed during the course of her pregnancy. However, she suffered massive blood loss during the surgery. Because of this, the surgeons also performed a hysterectomy during the C-section.

As a result of her blood loss, Torres suffered cardiac and pulmonary shock with severe hypoxia after the surgery. The hospital placed her on a ventilator and she received blood cells and plasma. The hospital returned her to the OR for additional exploratory surgery, but she passed away later that day from hemorrhagic shock and multi-organ failure.

The verdict was intended to care for her family, including her husband and 4 young children.

Anna Scott and Zachary Burke went to the Jefferson Healthcare Medical Center to have their baby, Lena. When Lana was delivered, she was blue and required extensive resuscitation in order to breathe. This loss of oxygen resulted in permanent brain damage, and she remains mentally and physically limited for life.

Her parents argued that medical providers missed critical signs that the baby was in distress during delivery because her umbilical cord was wrapped around her neck. Similar to the Boulter case mentioned above, Lana’s parents argued that the cause of her injuries was that the hospital did not realize that the fetal heart monitor used during labor and delivery was picking up the mother’s heartbeat, not the baby’s. Hospital staff proceeded with the delivery believing that the baby was not in distress.

Medical experts said that a labor and delivery team should routinely take the mother’s heart rate separately from the baby’s to ensure that they know whose is whose. This hospital was not following standard protocols.

Lana will have a permanent cognitive impairment, speech and language deficits, and impaired motor skills for life. She is now 6 years old and is unable to dress or feed herself.

Marquita Snow-Whiten was admitted to the hospital because she had fallen and wanted to be sure that her unborn baby was still safe. She had some tests, was discharged, and then had additional tests in the days following.

She returned to the hospital 5 days later because she had been kicked in the stomach. At that time, a fetal heart monitor displayed problems with the baby’s heart rate. Amirah was born by C-section 3 hours after her mother was admitted to the hospital. However, Amirah suffered hypoxic-ischemic encephalopathy (HIE), which means her brain did not receive enough blood or oxygen for a period of time.

Amirah now has permanent, extensive mental and motor deficits including profound brain injury. The plaintiffs’ verdict was based on the hospital’s failure to perform a C-section quickly enough to treat Amirah’s condition.

In 2016, a previously healthy 3-year-old arrived in the emergency room complaining of stomach pain, diarrhea, fever, and elevated vital signs. She was discharged about 2 hours later and her mother was told to administer ibuprofen as needed and that her symptoms would resolve on their own. The hospital did not perform any diagnostic testing.

Although the hospital personnel was aware that E.Coli is the most common cause of bloody diarrhea in children, and that the illness could be deadly, they did not admit the child for treatment. They discharged her a second time and provided her mother with Tylenol and Pedialyte.

The mother called the hospital 3 hours later and said that the child was getting worse and vomiting, in addition to diarrhea. She was also lethargic and not urinating. They returned to the ER, where she was determined to be severely dehydrated. She was evaluated by a physician, administered intravenous hydration and sent home.

Two days later, the child’s father found her unresponsive in their home in a pool of bloody diarrhea. She was readmitted to the hospital, where she was diagnosed with a kidney injury. She remained in the hospital for 3 months and developed complications including kidney failure, seizures, neurological failure, and diabetes. She finally returned home as an insulin-dependent diabetic with high blood pressure, kidney disease, and cognitive injury after intensive rehabilitation and chronic dialysis. She will have a lifetime of kidney transplants and hospitalizations.

The damage award of $18 million is based on the hospital’s failure to admit her to the hospital for proper monitoring and supportive care when she first arrived. If she had received proper treatment, she would not have suffered any of the permanent injuries that remain.

Charlene McCloud arrived at Montefiore Medical Center in the Bronx, New York. She was 24 weeks pregnant and complaining of pain and a pink discharge. The doctors treated her for a urinary tract infection and sent her home.

Two days later, Charlene delivered baby Somaya as a footling breech vaginal delivery. Somaya has Erb’s palsy and brain damage and cannot speak or communicate. She has special assistance in school and will require assistance for her lifetime and will not be able to work.

Charlene argued that her child was injured during delivery and that a C-section should have been performed because Somaya was both breech and premature. Charlene was not properly informed about the risks of vaginal delivery, and the hospital breached its duty of care.

Are you a victim of medical malpractice?

If you believe you’ve suffered an injury because of a doctor’s negligence, you might be able to recover damages in a lawsuit. The Enjuris law firm directory can guide you to a medical malpractice lawyer who can help you receive the damages you need to move forward.

Disclaimer: While we always aim to provide the most accurate information possible, we cannot guarantee accuracy 100% of the time.