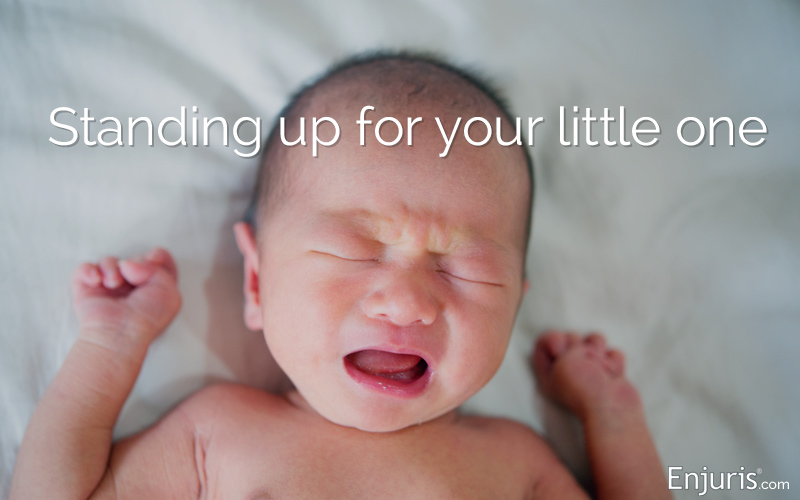 Did medical negligence cause your child’s HIE? Should you call an HIE lawyer?

Table of Contents + show
Did medical negligence cause your child’s HIE? Should you call an HIE lawyer?
What is hypoxic-ischemic encephalopathy (HIE)
What causes HIE?
Long-term HIE effects and symptoms
Filing a lawsuit based on HIE
Should I contact a medical malpractice lawyer?
HIE is one of the most serious birth injuries. Although the causes and symptoms of hypoxia aren’t always clear, a number of successful HIE medical malpractice lawsuits have been filed in the United States.

For parents, the worries associated with parenting start well before their baby is even born. Unfortunately, there are a number of birth injuries that can occur during pregnancy, during labor and delivery, or in the postnatal period.

Hypoxic-ischemic encephalopathy (HIE) is one of the most serious birth injuries.

Let’s take a closer look at HIE, and whether or not a diagnosis gives rise to a medical malpractice claim.

What is hypoxic-ischemic encephalopathy (HIE)

Hypoxic-ischemic encephalopathy (HIE) is a type of brain damage that occurs when the brain doesn’t receive enough oxygen or blood flow for a period of time.

HIE can develop during pregnancy, labor and delivery, or in the postnatal period.

According to an article published in the Newborn Infant and Nursing Review, HIE occurs in 1.5 to 2.5 of every 1,000 live births in developed countries. Interestingly, the rate of HIE hasn’t declined over the last few decades despite advances in obstetric care.

HIE occurs as a result of an event that deprives oxygen or blood flow to the newborn’s brain in the prenatal (before birth), intrapartum (during birth), or postnatal (after birth) period. The deprivation of oxygen and blood causes cells in the baby’s developing brain to rapidly decay and then die.

The exact event that prevents oxygen or blood flow to the brain is not always clear. However, there are a number of risk factors and potential causes, including:

Some children who suffer HIE won’t experience any health issues (or only mild or moderate effects), while others will have severe and permanent disabilities (such as developmental delay, cerebral palsy, epilepsy, or cognitive impairment) or die.

Facing factsAlmost 60% of infants with HIE will die or have severe disabilities by the age of 2 years, according to research published in the Journal of Obstetric, Gynecologic, and Neonatal Nursing.

When the blood or oxygen supply to the brain is interrupted, the rest of the body (beyond the brain) may also be deprived. This may prevent other organs from functioning properly, including the heart, liver, and kidneys.

Children born with HIE may:

To diagnose HIE, a neurologist will examine your baby. Your baby, who will be monitored by an electroencephalogram for seizures and signs of brain dysfunction, will undergo neuroimaging tests, including magnetic resonance imaging (MRI), to check for signs of brain injury.

Filing a lawsuit based on HIE

Sometimes the causes of HIE are unknown, other times HIE is unavoidable. In order to file a medical malpractice lawsuit, you must be able to prove that your healthcare professional’s actions (or inactions) caused or worsened your child’s HIE.

More specifically, to file a medical malpractice lawsuit, you must prove:

A number of successful HIE lawsuits have been filed across the country. Often these lawsuits allege that a healthcare professional failed to notice signs of fetal distress and waited too long to deliver the newborn.

The lawsuit alleged that doctors and nurses missed several critical signs that their baby was in distress during delivery. For example, medical providers used a fetal heart monitor during delivery but failed to realize that it was picking up the mother’s heartbeat, not the baby’s, misleading doctors into thinking the baby was fine.

“Lana was essentially strangled by her own umbilical cord and Jefferson Healthcare medical providers did nothing to intervene,” said the attorney for the plaintiffs. “The medical team’s actions – or inactions – deprived her of oxygen, leaving Lana profoundly brain injured.”

Anna and Zachary’s child needed extensive resuscitation to begin breathing on her own, and she suffers permanent brain damage that will limit her mental and physical capabilities for the rest of her life.

On December 20, 2019, a Kitsap County Superior Court jury handed down a $23.9 million award to the plaintiffs that Jefferson Healthcare Medical Center was required to pay.

Keep in mind that all states have a statute of limitations that limit the amount of time a plaintiff has to file a medical malpractice lawsuit. The time limit varies from state to state and, in most cases, the clock won’t start ticking until the newborn turns 18.

Nevertheless, it’s important to talk to a lawyer sooner than later in order to preserve your rights.

Medical malpractice and birth injury lawsuits are particularly challenging to litigate without an attorney. Due to the technical nature of medical care, expert testimony is usually required to determine whether the healthcare professional's actions fell below the applicable standard of care.

What’s more, it’s not always clear who should be sued (doctors, nurses, the hospital, etc.) and what damages can be recovered.

If your child suffers from HIE, it’s a good idea to meet with an experienced attorney as soon as possible. Most initial consultations are free.

You can contact an experienced birth injury attorney to handle your HIE claim using our free online legal directory.