Accident Help (Home) » Injury Blog » West Virginia Chemical Plant Explosion: What if It Happened Near You? 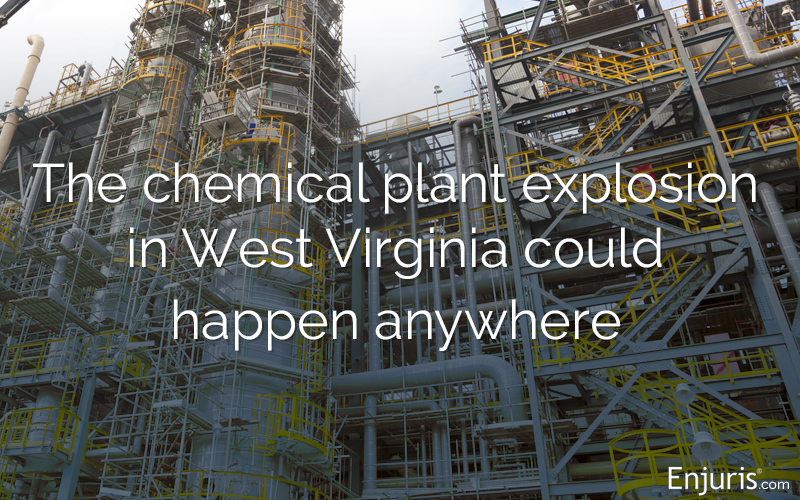 Not long ago, we wrote about the August explosion in Beirut and what would transpire if it happened here.

Fortunately, we’ve not seen a disaster at that magnitude, but tragically an explosion at a West Virginia chemical plant in December 2020 left 1 person dead and multiple injured.

Major news sources reported on an explosion at the Optima Belle chemical plant in Belle, West Virginia, on Tuesday, December 8, 2020. The company said that the explosion was the result of a 1,200-gallon metal dryer over-pressurizing during an operation where it was chemically drying a compound used for sanitization.

The fire burned for about 2 hours before it was extinguished. The injured employees were treated at a local hospital and released.

An explosion like this one — or any industrial accident — commonly raises questions about workers’ compensation for workers who were injured or killed.

Making a workers’ compensation claim after a workplace accident

Workers’ compensation allows an employee to claim benefits that cover medical treatment and lost wages as a result of an injury that happened at work.

Workers’ compensation exists in every state, though it’s handled a little differently depending on where you live. Almost every employer is required to provide workers’ compensation, and it covers any injury that happens in one of these scenarios:

Workers’ compensation is no-fault insurance, which means you don’t need to prove that your employer, a coworker, or anyone else was negligent, as you would in a personal injury lawsuit. Rather, you only need to show that you were injured while you were at work or performing a task requested or required by your job.

This could be significant if there’s an explosion or other industrial accident because it’s often unclear who (if anyone) was negligent. Part of the reason why workers’ compensation is no-fault coverage is that you don’t need to wait for extensive investigations or determinations of fault in order to get the financial benefits you need.

What does workers’ compensation cover (or not cover)?

Workers’ compensation benefits cover medical treatment for your work-related injury and a percentage of your lost wages. The amount of wage benefits varies depending on what state you live in.

If the worker has died from their injuries, workers’ compensation provides survivor benefits to family members and a portion of funeral and burial expenses, in addition to any medical bills from the work-related accident or illness that accrued prior to the person’s death.

Enjuris tip: Workers’ compensation benefits DO NOT provide damages for pain and suffering or other emotional distress, property loss, or full wages if you’re unable to return to work.

Filing a claim against a third party for a workplace injury

The workers’ compensation system was designed to benefit both the employee and the employer.

The employee can receive immediate benefits so they don’t accrue medical bills or get into debt from not receiving a paycheck. But the employer benefits, too… because when an employee recovers from a workers’ comp claim, they generally can’t sue the employer for damages related to their injury.

If you’ve suffered a severe injury in a work-related accident, you might not be fully compensated through the workers’ compensation system if you believe you’re entitled to damages for pain and suffering or other losses that workers’ comp doesn’t cover.

There’s one option outside the workers’ compensation system if you were severely injured: A personal injury lawsuit against a third-party defendant.

Examples of third-party lawsuits for work-related injuries include:

In the case of an explosion like what happened in West Virginia, there could be third parties who might be liable.

For example, if a shipment of material contained a chemical that it wasn’t supposed to include and that chemical caused the explosion, the company that produced the material could be liable. Alternately, if a shipper moved goods improperly and the items caught fire or something in the shipping or storage process was the cause of an explosion, that could also be a third-party liability claim.

The magnitude of an explosion

Thankfully, the fire in West Virginia was extinguished quickly and didn’t spread to surrounding areas — thanks to an immediate response from local first responders.

But in the Beirut explosion, the magnitude of the blasts resulted in 177 deaths and 6,000 injuries, in addition to leaving 300,000 people homeless and resulting in nearby businesses being damaged or destroyed.

In other words, not everyone affected by an explosion or industrial accident is an employee of the company.

In such cases, other legal remedies may exist.

In Beirut, not all of the people who were injured or killed were employees, and nor were all the people who lost property. Workers’ compensation only applies to someone injured at their workplace or who is doing their job at the time of the injury. The other injured citizens would need to file a personal injury lawsuit or make claims against the insurance policies of the negligent party.

Your claim might be property damage, and it could also be a toxic tort claim. This might be the type of case you file if your home or business was damaged by contamination by pollutants or toxins released into the air, water, or soil as the result of an explosion or industrial accident.

It’s also the area of law that you’d use if you became ill or injured because of breathing airborne toxins released from an explosion near where you live or work.

When to consult a personal injury attorney

Ultimately, these are complicated cases. It can be hard to determine who’s liable for an explosion or industrial accident, especially when there are several companies involved. In addition, it can be difficult to prove that an injury is the direct result of the explosion or accident. Finally, it can be difficult to assess the costs for a serious injury that results in high medical bills, ongoing medical treatment, and future lost earning capacity.

For all of these reasons, the key to financial recovery is to find a qualified personal injury or workers’ compensation lawyer near you. An experienced and qualified lawyer will get to the heart of the matter, find the liable parties, and use a variety of resources to help you receive the compensation you need.

The Enjuris law firm directory is a free resource for finding the lawyer in your state who’s best-suited to helping you reach financial recovery.