Accident Help (Home) » Injury Blog » What If a Beirut-type Explosion Happened Near You? 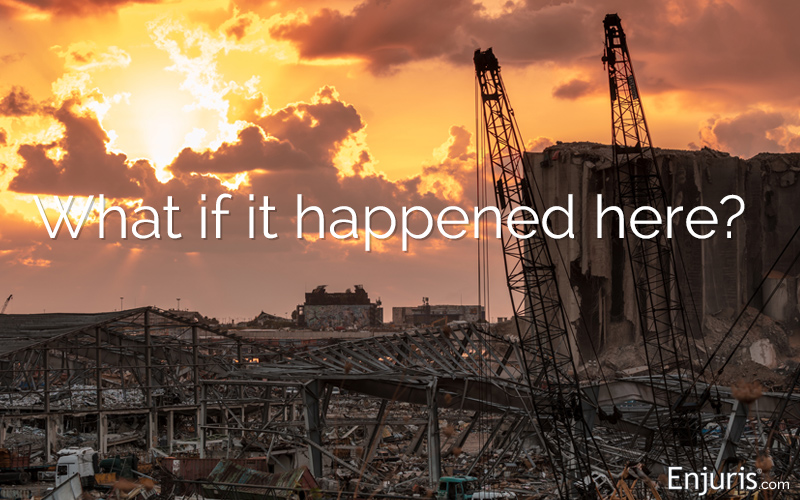 On August 4, 2020, 2 blasts rocked Beirut, Lebanon and surrounding areas. Reports indicated that the cause was 2,750 tons of ammonium nitrate that had been stored unsafely in a warehouse. Ammonium nitrate is a chemical commonly used for fertilizer in the agriculture industry and as a mining explosive.

The second explosion caused at least 177 deaths and 6,000 injuries. It also left 300,000 residents homeless and cost an estimated $10 billion to $15 billion in damages.

How did the Beirut explosions happen?

Table of Contents + show
How did the Beirut explosions happen?
Could an explosion like the ones in Beirut happen in the U.S.?
What to do if you’ve been injured in a blast on an industrial site where you work
Injury to bystanders
How to handle damage to your home or business as a result of an accidental explosion

The stockpile of ammonium nitrate arrived at the Port of Beirut in 2014 and had been sitting in a warehouse for 6 years. In 2013, a Russian-leased cargo vessel  was heading from Georgia to Mozambique when it reportedly made an unscheduled stop in Beirut. There, officials had safety concerns with the ship and there were unpaid fees, so they blocked it from continuing to sail. The owner abandoned the ship at the Port of Beirut, and the cargo (ammonium nitrate) was unloaded and dumped in a hangar in the port, where it remained until the explosion in 2020.

The U.S. state department told the Wall Street Journal that its investigation concluded that the blast was accidental.

Facing facts: The Beirut explosions caused extensive damage throughout the industrial waterfront, along with shopping and nightlife spots and residential neighborhoods that are home to more than 750,000 people. More than 250,000 people were displaced.

Could an explosion like the ones in Beirut happen in the U.S.?

Absolutely. In fact, it has  happened in the U.S.

In 2013, a fertilizer plant fire in the town of West, Texas, caused an explosion of more than 250 tons of ammonium nitrate that was stored improperly in flammable wooden boxes. Fifteen people were killed, including 12 firefighters, and more than 150 buildings were leveled or damaged.

In the U.S., the Occupational Safety and Health Administration (OSHA), the Environmental Protection Agency (EPA) and the National Fire Protection Association provide guidelines for safe handling of hazardous materials. Mainly, the standards require proper ventilation in areas where ammonium nitrate is stored. Ventilation can prevent the decomposition byproduct chemicals  from reaching a concentration that would cause an explosion.

Industrial accidents often happen because a company doesn’t follow OSHA or other regulatory guidelines as it should.

If people and companies aren’t taking safety precautions, an accident can happen anywhere. Whether you work or live near an industrial site, you could be at risk.

If you work in an industrial area where a blast occurred and you were injured, you might be eligible for workers’ compensation benefits. Your employer is responsible for your health and safety while you’re at work. Period.

Instead, it might be possible to file a third-party claim. That means if some entity other than your employer was negligent for causing the accident, you might be able to sue them directly instead of using your workers’ compensation benefits.

If a large-scale incident like the Beirut explosions happened in the U.S., there might be several entities that could be sued for the damages — from the owner of the property, to a contractor who was supposed to be maintaining the conditions, to a regulatory agency that might’ve failed in making sure that safety precautions were being met.

People from the surrounding areas near the Beirut blasts were hurt, not just from the blasts themselves, but also from debris and damage to buildings. A strong explosion can reverberate for miles… like an earthquake or volcano, homes or buildings could be damaged and you could be hit with debris, trapped under rubble, or suffer other kinds of injuries.

If that happens, your only legal option is to file a lawsuit for your injury damages, just like you would if you were in a car accident or suffered a slip-and-fall injury.

Again, there can be several defendants and you might have no way of knowing on your own who the companies or individuals are who can be held liable for this or any other type of industrial accident.

The first thing to do is to find medical help right away. You might be in a situation where dozens or hundreds of people are all trying to access medical care at the same time, and resources could be strained. There are a lot of factors involved, like the size of your community and resources or hospitals available, the size and reach of the accident, and the number of people who need help.

It also might be hard to get medical documentation of your injuries in a large-scale emergency situation. If you’re being tended to by medics or pop-up medical services, they likely won’t have access to your electronic medical record and documenting the injuries is likely less important in the moment than actually taking care of people’s trauma needs.

If that’s the case, do what you can to preserve evidence. The fact that the accident happened won’t be in question, but you might need to prove that your injuries are a direct result of the accident and didn’t happen in some other way that was unrelated.

Take photos at the scene if you can. Document your own injuries, how the area looked immediately following the accident, and any other evidence that can help demonstrate how and when you were hurt.

Enjuris tip: If there were a lot of people injured in the same incident, you might want to ask your lawyer about joining or filing a class action lawsuit—that’s when plaintiffs join together to file a lawsuit because their claims are similar or based on the same cause.

For example, several class action lawsuits were filed following the September 11, 2001 terrorist attacks, some of which were for toxic exposures at Ground Zero.

Your home or business could be damaged if it’s within range of an explosion or other large-scale industrial accident.

You might experience physical damage, like collapse, broken roof, windows, or other structural issues. The other possibility is contamination from toxins, such as airborne gases, or if an explosion results in chemicals that leach into the soil or enter the water supply.

Not only can toxic contamination or physical damage make your building unsafe for you to live or work, but it also can affect your ability to sell the property.

Your homeowners or business insurance would likely cover some damage from an accident like this (depending on the terms of your policy), but you can also file a lawsuit for expenses that your insurance doesn’t cover.

These kinds of accidents are rare, but they do happen—as the people of Beirut unfortunately experienced first-hand.

If your livelihood, home, or health and safety has been affected by an explosion or other industrial accident, you should contact a personal injury lawyer who can help. It’s going to be a complicated case, and the likelihood is that the company or companies that caused the accident have deep pockets.

Consider browsing the Enjuris law firm directory to find a knowledgeable, skilled, experienced lawyer who can explore your legal options.