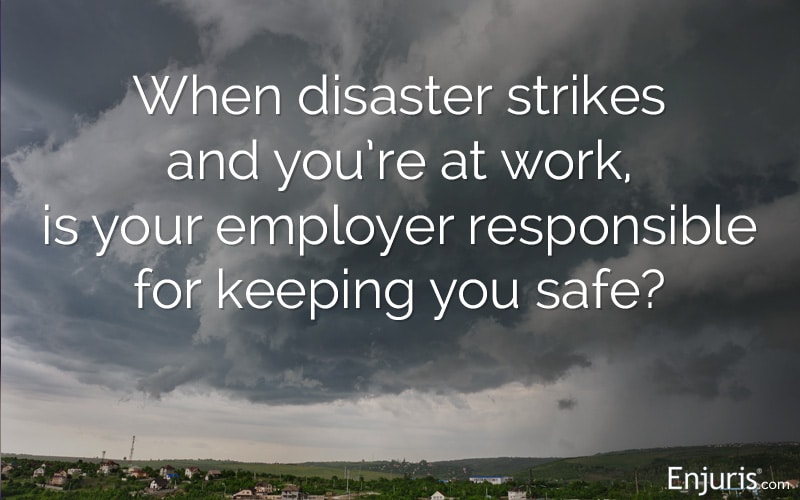 The tornado that touched down across several states in December 2021 was nothing short of catastrophic.

Of the 74 people who died during the storm in Kentucky, 8 were workers at the candle factory. Reports said that 15 workers asked managers to let them go home to seek shelter when the storm warnings began, but the managers did not allow them to do so. Some workers left, even knowing that they could lose their jobs.

One worker who was injured but survived said later that they asked to leave after the tornado sirens sounded around 5:30 pm. Even though the employees hid in “safe” areas like bathrooms and hallways within the plant, many were still injured and others perished.

The injured worker said that she chose to stay, but supervisors said to the ones who wanted to leave that doing so would mean losing their jobs. There were about 3 or 4 hours in between emergency alarms, and the workers wanted to leave during that time to go home for safety.

The injured worker later said that after the second siren at 9 pm, she was near the candle wax and fragrance room when the building began to collapse and she was hit in the head by concrete, then was trapped under a cement wall for 6 hours. She ultimately sustained chemical burns, kidney damage, and severe leg injuries. (source: NBC News)

While the candle factory is just one portion of the tremendous devastation that left 200 miles of the U.S. in shambles, it raises some important questions about an employer’s liability for deaths or injuries that happen at work as the result of a natural disaster.

What is an employer’s responsibility to a worker during a natural disaster?

The Occupational Health and Safety Administration (OSHA) says that employers and businesses are responsible for protecting employees from unreasonable danger in the workplace—that includes a natural disaster that would threaten their safety or health.

Employers should have a safety plan and preparations to deal with natural disasters. This should include a policy for inclement weather, a communications plan, and a crisis management plan. Employers are responsible for the safety and health of workers, and must maintain a safe and healthy workplace. They are also responsible for protecting workers from an anticipated hazard, including a natural disaster.

Workers’ compensation is a system that provides benefits to employees who are injured at work.

If that sounds very broad, that’s because it is.

Although each state regulates its own workers’ compensation benefits, the general rule is that a worker can be compensated for an injury that happens either in the workplace or while the worker is engaged in a task related to their job.

What makes workers’ compensation insurance different from a personal injury claim (such as a car accident or slip and fall) is that you can receive workers’ comp benefits without having to prove that a person or entity was negligent. In a personal injury claim, you can only recover damages if your injuries were caused by the defendant’s negligence, which is a lack of reasonable care or breach of duty.

When you file a workers’ compensation claim, you need to prove only that you were either at work (i.e. in your place of work) at the time you were injured or that you were doing your job at the time of the injury if it happened off-site.

For example, if you work in an office and get injured because you tripped over a phone cord, slipped on a wet spot in the hallway, or got a paper cut that became infected, even though there might not be anyone to “blame” for your injury, you can still recover benefits simply because you were at work at the time of the injury.

Along those same lines, if you slip and fall or are in a car accident (or suffer another type of injury) while doing your job but not at your place of work, you can still claim workers’ compensation benefits. You would simply need to demonstrate that the injury occurred while you were traveling to or from a work assignment, at a location where you were performing tasks for your job (such as on-site for a client or customer, at a store purchasing items for work, or picking up coffee for your team at your manager’s request), or engaged in a work-related activity.

Each state determines exactly how much you can recover in workers’ compensation insurance. In most states, you receive a percentage of your average weekly wage for the time when you’re out of work recovering from your injury, coverage for medical treatment and related expenses, and a portion of funeral costs and survivor benefits if a worker suffers a fatality.

Can you get workers’ compensation for an injury from a natural disaster?

Since workers’ compensation benefits do not rely on negligence, you can recover for an injury that was an act of nature or some other instance that was not preventable.

Can the deceased workers’ families file a wrongful death lawsuit against the candle factory?

One of the important aspects of workers’ compensation is that it bars a claimant from filing a lawsuit against the employer for the same injury.

The workers’ compensation system is advantageous to both employers and employees because employees get a quick resolution and payment without proving fault or negligence. For employers, they are protected against time-consuming and costly lawsuits... even if there was negligence on the employer’s part.

Even though an injured worker can’t sue their employer for benefits or lost wages, there are compensatory damages that workers’ compensation does not include. Pain and suffering, loss of consortium, and wrongful death can’t be recovered unless you file a lawsuit.

The surviving family members are not employees of the candle factory and therefore are not barred from filing a lawsuit if they suffered compensable injuries (like pain and suffering, reduced quality of life, lost earning capacity, etc.) as a result of their loved one’s death.

Particularly in a case like what happened at the Kentucky candle factory, there was a warning of approaching tornadoes and an opportunity when it was safe enough to leave the building. However, the management failed in its responsibility to keep employees safe by requiring them to stay or face job loss if they were to leave.

Could the managers have predicted that a tornado would level the building?

No. But there was a warning that a dangerous situation could arise.

If the families of the workers who died in the Kentucky candle factory pursue a lawsuit, they would have to prove that they suffered harm because of their family member’s death, along with proving that the candle factory managers were negligent in preventing their loved ones from leaving once the tornado warning sounded.

If an employer fails to meet their duty of maintaining a safe and healthy work environment for employees — and if an employee dies at work — the employer is responsible for providing workers’ compensation survivor benefits to dependents. But if there are more losses than what workers’ compensation would cover, the family members could file a lawsuit to recover additional damages.

Enjuris tip:Find a personal injury attorney in your state.