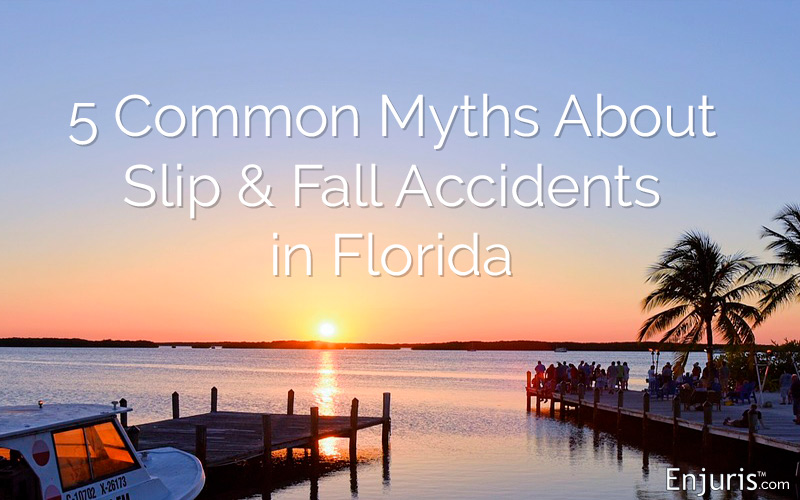 According to the National Floor Safety Institute (NFSI) slip and falls account for over 1 million hospital emergency room visits every year. Nevertheless, only a small percentage of those injured in slip and fall accidents attempt to recover damages through personal injury lawsuits.

Myth #1: You can’t recover damages if you were partially at fault

Some slip and fall victims forgo filing a lawsuit because they believe they were at least partially at fault for the fall. For example, the child may have been running through a store when they fell, or perhaps the person slipped on a substance they would have seen had they not been texting on their phone.

Florida is a pure comparative fault state. This means that you can recover damages even if you were 51% at fault for the accident. However, your damages are reduced by your percentage of fault.

Jim is shopping for a new toaster in a Tampa department store. He glances at his watch and realizes he’s late to pick up his daughter from soccer practice. Jim puts down the toaster and starts running for the store exit. While running, he trips over the curled edge of a carpet and falls. He injures his back as a result of the fall and sues the department store for $50,000.

The jury finds that Jim was 10% at fault for his accident because he was running through the department store. The jury also finds that the store was 90% at fault for not fixing the curled carpet corner, despite numerous complaints from other customers.

In the above hypothetical, Jim would be able to recover a maximum of $40,000 in damages.

Myth #2: You can’t recover damages if the defendant didn’t have notice of the dangerous condition that caused you to slip and fall

Let’s say a store owner is aware that damage to the roof has resulted in a puddle of water on the floor but neglects to put up a warning sign or clean the puddle of water. You enter the store and slip and fall. In this hypothetical, you probably know instinctively that you can recover damages from the owner – and you’re right!

But what if the store owner did not know about the damage to the roof or the puddle of water on the floor? Slip and fall victims often think they don’t have a legitimate case if the owner of the premises wasn’t aware of the dangerous condition that caused their accident.

For example, if the puddle of water had been on the floor for an hour and was visible from the employee’s position behind the counter, the law would likely conclude that the owner was negligent because he should have known about the dangerous condition.

An attorney can establish the evidence necessary to show that the owner should have known about the dangerous condition that caused your accident. This might involve reviewing security footage, interviewing witnesses and employees, and reviewing the relevant cleanup and maintenance procedures.

Myth #3: You can’t recover damages if you slip and fall on public property

If you’re injured inside a store, it’s easy to point the finger at the store owner or store employee. But what happens when you slip and fall on a sidewalk or in a park? It’s a common myth that there’s nowhere to point the finger if you fall while on public property.

These days, many public places are actually owned by private entities. Those that aren’t private are owned by the government.

In either case, you can sue.

It’s important to recognize that there are certain procedures you must follow when suing the government. For example, you must first provide a notice of claim. In addition, your lawsuit must be filed more quickly than if you were suing a private party.

For these reasons, it’s important to talk to an attorney right away if you fall on public property.

Myth #4: You can only receive compensation for your physical injuries

It’s another common myth that slip and fall victims can only recover damages for their physical injuries. In Florida, you can recover the following damages in addition to the medical expenses caused by your fall:

Enjuris tip: Learn more about how to calculate your damages in a Florida personal injury case.

Myth #5: You should exaggerate your injuries when suing a large company

Big box stores like Walmart and Home Depot have liability insurance and deep pockets, right? Maybe so, but this doesn’t mean you should exaggerate your injuries to try to squeeze more money out of them.

Large companies have competent lawyers who will go to great lengths to investigate your injuries and determine if they are legitimate. This will undoubtedly include reviewing your medical records, deposing your doctors, hiring their own doctors to review your records and conduct a physical examination, as well as asking your friends and family questions while they’re under oath.

If you’re caught exaggerating your injuries, you won’t be seen as a credible witness and the judge or jury may not believe what you have to say about your legitimate injuries. You’ll quickly find yourself in the position of the boy who cried wolf and you may not recover any of the damages you deserve.

Were you or a loved one injured in a slip and fall accident? Cut through the misinformation and reach out to an experienced slip and fall lawyer today.

What are some other common myths and misconceptions about slip and fall accidents?