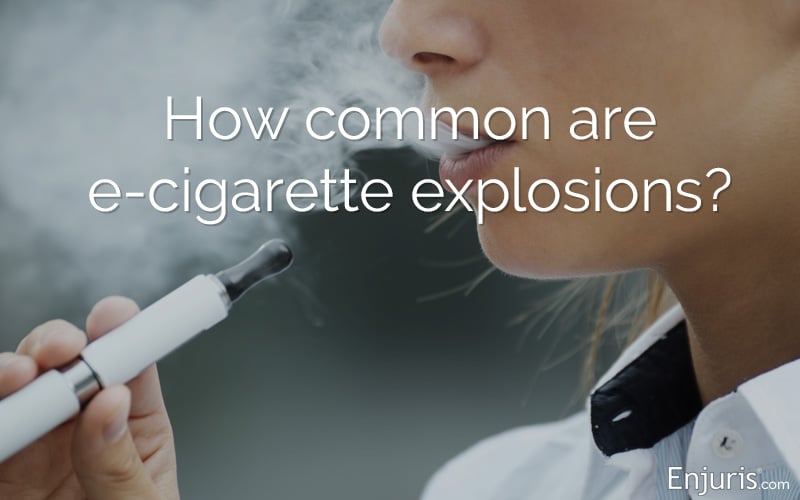 A Florida resident was awarded more than $15 million in damages after an e-cigarette battery exploded in his pocket.

Let’s take a look at what happened and whether e-cigarette battery explosions are something you should be worried about.

Table of Contents + show
About the lawsuit: Manuel Ortega v. Vapor Life LLC
How common are e-cigarette burn injuries?
Can you recover damages if you’re injured by an e-cigarette?

Manuel Ortego filed a lawsuit against Vapor Life LLC after his e-cigarette battery exploded in his pocket, causing third-degree burns to his lower extremities. Although Shenzhen Battery Company manufactured the battery, they weren’t named as a defendant.

The lawsuit alleged that Manuel had been using the Vapor Life e-cigarette for less than a month before it suddenly blew up in his pocket. The lawsuit further alleged that the battery lacked proper thermal protection due to a design flaw.

On October 19, 2021, a South Florida jury awarded Manuel $21,000 to compensate him for the medical expenses associated with his burn injuries.

In addition, the jury awarded Manuel $15 million for his pain and suffering.

The term “pain and suffering” refers to the pain, discomfort, anguish, inconvenience, and emotional trauma that’s caused by an injury. Pain and suffering damages are considered “non-economic damages.”

Enjuris tip: Learn more about the different types of damages available in a personal injury case.

Vapor Life LLC is no longer an active company, so it remains to be seen whether Manuel will actually be able to recover the money he was awarded.

How common are e-cigarette burn injuries?

E-cigarettes were invented in 2003 by a Chinese pharmacist. By 2010, several brands were available in the United States market.

The battery enables the heating element to heat the nicotine-containing solution into an aerosol, which is then inhaled through the mouthpiece.

The initial public concern about e-cigarettes focused on the potentially harmful chemicals involved. However, more recently, the public has grown concerned about the possibility of harm caused by exploding e-cigarettes.

E-cigarette explosions, while rare, are probably more common than you think.

Facing facts:One study that pulled data from 5 burn centers around the country found 127 patients injured by exploding e-cigarettes between 2015-2019.

Although the cause of e-cigarette explosions varies, overheating of the battery (“thermal runaway”) is believed to be the most common cause. Thermal runaway is also responsible for many of the exploding smartphones and exploding Tesla batteries that have been in the news.

Although we certainly can’t guarantee you won’t be injured by an e-cigarette, there are some steps you can take to decrease the odds of a battery explosion or fire:

Can you recover damages if you’re injured by an e-cigarette?

If you’ve been injured by an e-cigarette, there’s a good chance you can recover damages. The type of lawsuit filed by e-cigarette burn victims is typically a product liability lawsuit.

The law recognizes 3 types of defects that can lead to a product liability claim:

Manuel Ortego’s lawsuit against Vapor Life LLC is not the only e-cigarette explosion lawsuit that has been filed.

In 2018, a Florida man died when his e-cigarette exploded. Tallmadge D’Elia, 38 years old, was killed when an e-cigarette manufactured by Smok-E Mountain exploded. A projectile from the e-cigarette struck Tallmadge in the head, causing his death. A wrongful death lawsuit was filed but has not yet been resolved.

In 2019, a Florida court awarded more than $2 million to a Florida man who was injured when his e-cigarette exploded in his mouth. The man, who sued the company that sold the lithium-ion battery used in the e-cigarette, was awarded $48,000 for medical expenses and $2 million for his pain and suffering.

E-cigarette injury cases will undoubtedly become more common as people continue “vaping” and using e-cigarettes. If you’ve been injured in an e-cigarette accident, schedule a free consultation with a defective product attorney near you to review your legal options.