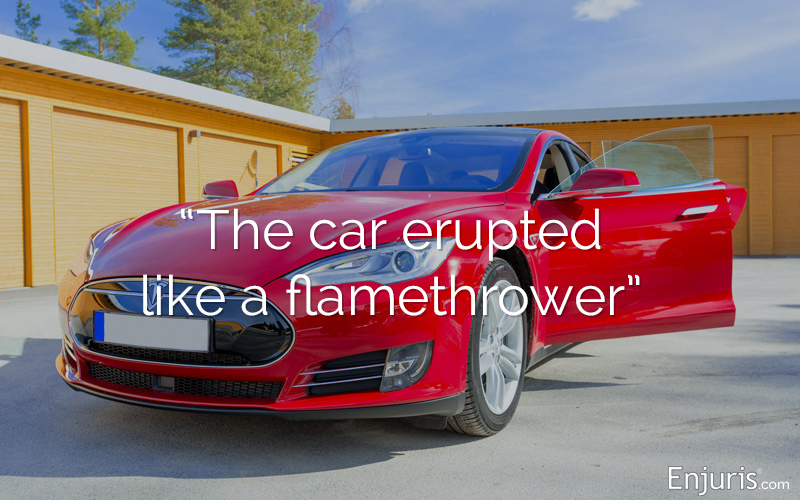 Why do Tesla car batteries catch fire, and what legal options do you have if you are injured?

Several highly-publicized Tesla fires over the last decade have left many people wondering how safe the electric vehicle’s batteries are and what legal options exist if they’re injured as a result of a battery catching fire.

A Tesla owner was driving his Tesla Model S in Los Gatos, California when he got a flat tire. His car was towed to a shop... where it burst into flames.

“I heard a strange hissing sound. I came out and there was smoke everywhere. So the shop immediately called the fire department,” said the owner. “By the time they got here, the car was already on fire.”

Firefighters put out the fire and waited for the battery to cool before towing the Tesla to a new lot, where it promptly caught fire again.

Tesla, a popular electric vehicle company, has been plagued by lawsuits arising from battery fires since a Tesla Model S first burst into flames in 2013. In this article, we’ll look at the history of Tesla battery fires and discuss your legal options if you’re injured as a result of your Tesla’s battery catching fire.

On October 2, 2013, a Tesla Model S caught fire for the first time when it collided with some debris on Highway 167 in Kent, Washington. On the same day, Tesla company spokeswoman Liz Jarvis-Shean released a statement explaining that the fire was caused by a large metallic object striking one of the lithium-ion batteries.

More than 40 Tesla fires have since been reported. Many of the fires occurred after collisions, but several occurred while the vehicles were parked.

Here’s a look at just a few of the Tesla battery fires that have occurred since a Tesla first burst into flames on October 2, 2013.

Why do Tesla batteries catch fire?

Every Tesla battery is made up of thousands of cells, which are configured into the modules that make up a battery pack. Tesla batteries typically catch fire when a single cell is damaged—whether the damage is the result of an impact or a manufacturing defect. When one cell is damaged, it can overheat and cause a chain reaction that causes a fire (a process called thermal runaway).

Currently, electric cars make up fewer than 1% of cars on the road in the United States. But large auto manufacturers, including General Motors, are making a push to eliminate gasoline cars by 2035.

This begs the question:

Supporters of Tesla and other electric cars point to this data to help make the argument that a gasoline-powered car is 11 times more likely to catch fire than a Tesla. Critics, however, argue that these numbers don’t tell the whole picture because most Tesla’s are new and significantly younger than the average gasoline-powered car.

According to the results of an in-depth report produced for the NHTSA:

"The propensity and severity of fires and explosions from lithium-ion battery systems are anticipated to be somewhat comparable to or perhaps slightly less than those for gasoline or diesel vehicular fuels," but “the technology and industry have not matured sufficiently to have established comprehensive safety codes and standards that mitigate risks.”

Lithium-ion batteries can burn for hours and often reignite later. Harris County Constable Mark Herman, who was on the scene for the April 2021 Houston Tesla fire, reported that it took firefighters 4 hours and more than 30,000 gallons of water to extinguish the battery fire, something he said firefighters would normally have controlled in a matter of minutes.

If you or a loved one suffered damages as a result of your Tesla’s battery catching on fire, you might be able to receive compensation by filing a product liability lawsuit.

The law recognizes 3 types of defects that can lead to a product liability lawsuit:

Product liability claims are typically based on negligence or strict liability.

Enjuris tip:If another vehicle was involved in your accident, you might also be able to file a personal injury lawsuit against the driver of the other vehicle—assuming the driver was at least partially responsible for the crash.

Were you injured by a Tesla battery fire? Use our free online directory to reach out to an attorney near you today.