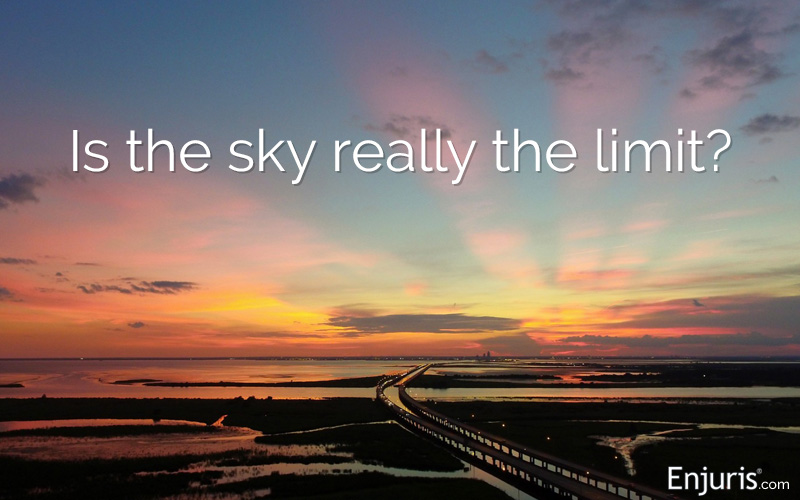 Find out whether your damages will be reduced by statute

Table of Contents + show
Find out whether your damages will be reduced by statute
Types of personal injury damages available in Alabama
Alabama’s damage caps
Wrongful death damage caps
Punitive damage caps
Other ways your damages may be limited
All states, including Alabama, have damage caps that limit the amount of damages a plaintiff can recover in certain cases.

Enjuris tip:Here are the top 10 personal injury settlements and judgments in 2020.

Although these awards are quickly reported by news outlets, they can be deceiving.

Most states have damage caps that limit the amount of damages a plaintiff can actually receive. If the jury awards an amount above the cap, the court will reduce the amount.

Alabama used to have several damage caps. However, almost all of the damage caps have been declared unconstitutional by the Alabama Supreme Court.

The following day, a nurse injected Sparine into Barbara’s right forearm (an improper location for such an injection). The injection caused an immediate "burning sensation," followed by a loss of feeling in portions of her right hand.

Two days later, Barbara suffered 3rd-degree burns to her finger while cooking. Because of the absence of sensation in her hand, she was unaware of the significance of the injury until the affected area became gangrenous. The gangrenous condition ultimately required amputation of her finger. Barbara is expected to experience permanent pain in other areas of her right hand and arm.

Barbara filed a medical malpractice lawsuit against Mobile Infirmary. She was awarded $600,000 in damages. However, because of a damage cap in place at the time, Barbara’s non-economic damages were reduced to $400,000.

Barbara appealed the case, arguing that the cap on non-economic damages was unconstitutional.

The Alabama Supreme Court ultimately held that the damage cap violated state constitutional provisions protecting the rights to trial by jury and equal protection of the law. The court also noted that the purported reason behind the damage caps (to help limit the rising cost of medical insurance) was flawed at best.

Because of Moore v. Mobile Infirmary Association, there are no longer non-economic damage caps in Alabama medical malpractice cases.

To understand damage caps, it helps to understand the 3 types of damages available in an Alabama personal injury case:

In most personal injury cases, damage caps aren’t applicable. Damage caps only become an issue in 2 types of cases:

Let’s take a closer look at the damage caps for each type of case.

A wrongful death lawsuit is an action brought against a defendant who caused a person’s death through recklessness or negligence.

The rationale behind a wrongful death lawsuit is that certain surviving family members of the deceased should be able to recover damages for the loss of their loved one.

Alabama is the only state in the country that completely denies recovery of compensatory damages (economic and non-economic damages) in wrongful death lawsuits. Only punitive damages are recoverable.

Under Alabama Code 6-11-21, punitive damages in civil actions that do not involve physical injury must not exceed 3 times the amount of compensatory damages or $500,000, whichever is greater.

Bill was driving his Ferrari LaFerrari (a $1.4 million car) when he was rear-ended by a drunk driver.

Fortunately, Bill wasn't injured in the crash. However, the crash caused $200,000 worth of damage to his Ferrari LaFerrari.

The drunk driver was uninsured at the time of the crash, so Bill files a personal injury lawsuit against him.

When it comes to civil actions that DO involve physical injury, punitive damage awards must not exceed 3 times the amount of compensatory damages or $1.5 million, whichever is greater.

The punitive damage caps discussed above do not apply to wrongful death cases or intentional infliction of physical injury cases.

Other ways your damages may be limited

Although damage caps are the most obvious way in which your damages may be limited, there are other factors that may limit the amount of damages you receive.

Alabama is one of only a handful of states that follow the pure comparative fault rule. This means that if a plaintiff is even 1 percent responsible for causing their injuries, they’re barred from recovering ANY damages.

Jason is driving his pickup truck east on Dauphin Street in Mobile, Alabama. It’s dusk, but Jason hasn’t turned on his headlights yet.

Samantha is headed south on Florida Street toward the intersection of Dauphin and Florida. Samantha is drunk, and she blows through the stoplight.

After a 2-day trial, the jury finds that Samantha was 99 percent at fault for the crash (for drinking and driving), and Jason was 1 percent at fault (for driving at dusk without his headlights on).

Under Alabama’s pure comparative fault rule, Jason is prohibited from recovering ANY damages.

How do you mitigate damages?

First, follow your doctor’s orders, and avoid participating in activities (such as sports activities) that might aggravate your injury or slow your recovery time.

Second, keep track of all your medical expenses. Additionally, keep track of your injuries' impact on your day-to-day life (for purposes of supporting a pain and suffering or emotional distress claim).

If you have questions about your lawsuit, including whether it’s subject to any damage caps, we recommend talking to an experienced Alabama personal injury attorney. You can find one using our free online directory.