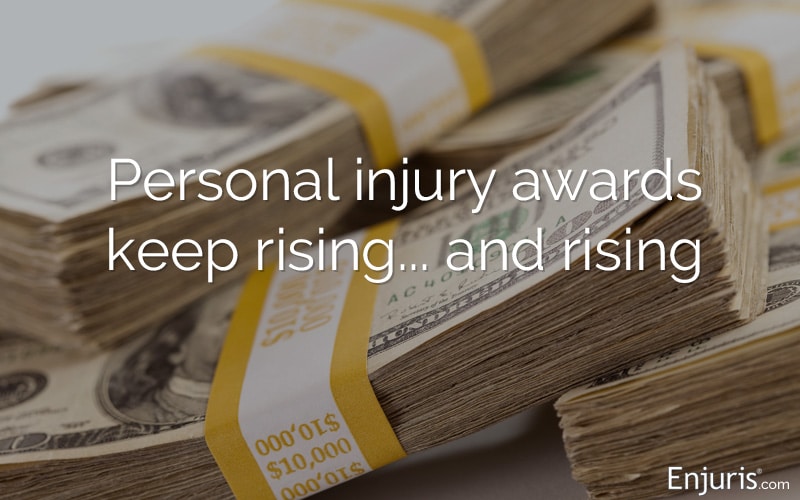 The term “personal injury” refers to a type of lawsuit in which the person filing the lawsuit has suffered physical, emotional and/or financial harm.

Most personal injury claims are brought under 1 of the following 3 legal theories:

Settlements and judgments in personal injury cases vary considerably depending on the circumstances of the specific case.

Table of Contents + show
Settlements and judgments in personal injury cases vary considerably depending on the circumstances of the specific case.
Top 10 personal injury awards in 2020

A few of the many factors that can impact the size of a personal injury award include:

Keeping in mind that some settlements are confidential, let’s take a look at 10 of the top personal injury awards in 2020.

Duane Washington, a former Army sergeant, suffered serious injuries in a 45-car pileup in Tallahassee that started when a semi-truck owned by Top Auto Express jackknifed on the road.

Duane Washington’s injuries included permanent bladder and bowel incontinence, loss of sexual function with paralysis, and atrophy of his right leg requiring Duane to use an arm crutch to walk.

The defendant was unrepresented during the trial, which likely contributed to the high verdict.

An Essex County jury awarded $125 million to a 50-year-old lawyer from West Orange who was paralyzed when she was struck by a utility pole while waiting for a bus for her commute to work.

The pole, which was owned by Verizon, had been rotting for some time and finally snapped at its base.

The Washington State Department of Social and Health Services was found negligent in the deaths of Susan Cox Powell’s sons Charlie, age 5, and Braden, age 7.

The two boys were murdered by their father during a social-work-supervised visit.

A husband and wife in Pomeroy, Ohio were awarded $50 million after the husband developed testicular cancer. The lawsuit alleged that water contaminated with DuPont’s chemicals, specifically the man-made chemical Perfluorooctanoic Acid (PFOA), caused his cancer.

Ed Vanderventer was paralyzed after his 2013 Hyundai Elantra was rear-ended by Kayla Schwartz.

Ed filed a lawsuit against Hyundai alleging that the Hyundai’s driver’s seat was defective. Specifically, he alleged that the posts and guides in the head restraint deformed towards his spine as a result of the impact.

Maria Fernandez, 71, was taken to a hospital after she fell and fractured her ankle. Three days after the hospital admission, the treating physician sent Maria to St. Anne’s Nursing Care & Residence with an order that she receive anticoagulants.

Despite the doctor’s order, Maria did not receive the anticoagulant medicine.

Maria’s condition quickly deteriorated and she ultimately suffered a saddle pulmonary embolism, which caused her death.

Maria’s estate sued the treating physician and the hospital alleging that they failed to ensure that Maria received the anticoagulants she clearly needed.

A Madera County jury awarded more than $21 million to 18-year-old Jose Maclovio after a car accident.

Jose was rear-ended by Craig Brewer at 55 miles per hour while Jose was stopped at a stoplight. As a result of the accident, Jose was paralyzed from the waist down.

A truck driver was driving a loaded tractor-trailer along Georgia Highway 369. At the same time, Kip Holland was walking along the shoulder of the highway.

At some point, the truck drifted from its lane. It crossed the outside edge of the pavement and the driver lost control. The weight within the loaded trailer shifted and the truck overturned. The trailer rolled on top of Kip, causing his death.

This personal injury case arose from an electric shock injury on a power plant owned and operated by Indianapolis Power and Light (IPL) in Petersburg, Indiana.

Wayne Simmons, a subcontractor, was tasked with installing the foundation for a new hydrogen tank pipe on the northwest corner of the power plant.

During the excavation, Wayne struck a live 4,160-volt electrical conduit, which caused an explosion. The explosion rendered Wayne permanently disabled.

If you’ve suffered an injury as a result of someone else’s negligent or wrongful actions, consider using our free personal injury law firm directory to find an attorney who can help you receive the settlement or judgment you deserve.