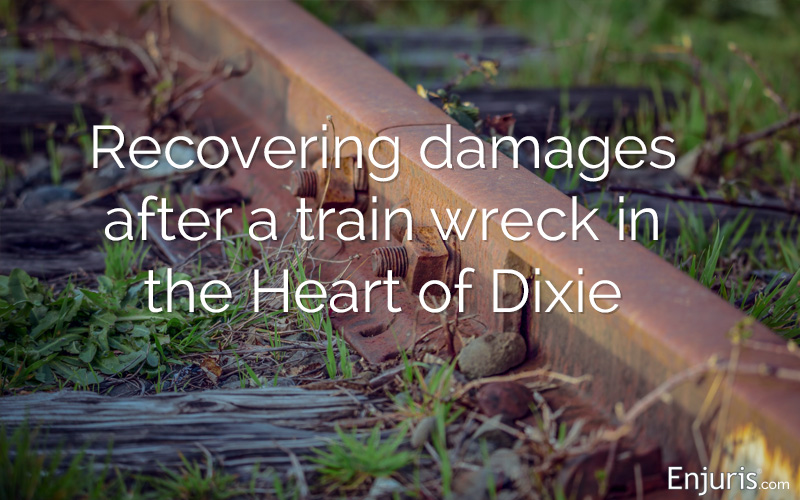 How to recover damages after a train wreck, whether you’re a passenger or railroad employee

During the late 19th century and early 20th century, train travel was incredibly popular in Alabama.

Alabama's first train was a horse-powered system operated by the Tuscumbia Railway in 1830.

Today, Alabama's 4,728 miles of rail are primarily used to haul more than 90 million tons of cargo annually. However, Alabama currently has 2 intercity passenger rail services operated by Amtrak, the Crescent and the Sunset Limited. Both rail services operate on tracks owned by freight railroads.

The vast majority of train accident fatalities occur at railroad crossings and are the result of drivers or pedestrians ignoring flashing lights, barrier gates, or other active warning devices.

According to National Highway Traffic Safety Administration, a motorist is almost 20 times more likely to die in a crash involving a train than in a collision involving another motor vehicle.

Real Life Example:
The Big Bayou Canot Disaster
On September 22, 1993, an Amtrak train headed to Miami, Florida derailed near Mobile, Alabama, killing 47 people. The accident, which remains the deadliest in Amtrak's 50-year history, was caused by a negligent towboat operator.

The towboat, operated by Andrew Stabler and Willie Odeon, was pulling 6 barges through the Alabama marshes. Andrew was sleeping as the towboat made its way up the Mobile River. Willie, who was driving the boat, did not know how to use the boat's radar system. What's more, the boat had no compass or nautical charts, which made it difficult to navigate through the foggy night.

Becoming lost, Willie turned into an area where barges are prohibited and struck a 7-foot-high rail bridge designed to take trains over the marshes. The impact knocked the tracks out of alignment by 3 feet.

Shortly after the impact, the Amtrak came over the bridge traveling 70 miles per hour. When the train hit the misaligned tracks, it derailed. All 3 locomotives and the first 4 cars plunged into the cold water.

Who can be sued for a train accident in Alabama?

When a train wreck happens, there are a number of parties who may be liable. These include:

How does an injured train passenger recover damages?

If you're an injured train passenger, you may wonder what you need to do to recover damages. Assuming you weren't responsible for the accident, you typically have 2 options:

In most cases, personal injury lawsuits arising from train wrecks will be based on negligence. In Alabama, you need to prove 3 elements to establish negligence:

How does an injured railroad employee recover damages?

How does the family of someone killed in a train crash recover damages?

If someone is killed while riding as a passenger on a train, certain surviving family members may be able to receive compensation by filing a wrongful death lawsuit.

When a railroad employee is killed at work, a similar lawsuit can be filed under FELA. Available damages under FELA include:

Failing to file your lawsuit within the statute of limitations will result in your claim being forever barred.

Do I need to hire an Alabama train crash attorney?

Train wrecks can be significantly more complex than car crashes and many other types of personal injury accidents.

Train accidents typically involve multiple defendants (often residing in multiple states). What's more, government agencies, such as the FRA will be heavily involved in any case.

If you intend to file a lawsuit or FELA claim, we strongly recommend contacting an experienced train accident attorney. You can find an attorney near you using our free online legal directory.