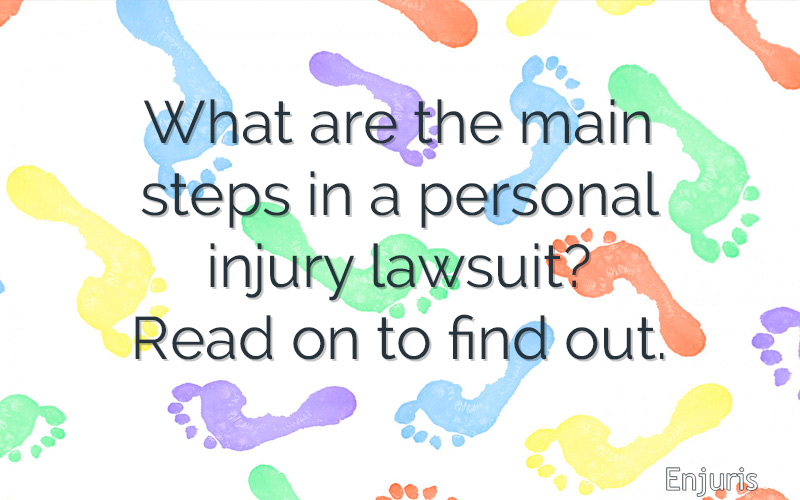 Table of Contents + show
Learn about the basic steps in all civil litigation cases so that you know what you’re in for
Step 1: Summons and complaint
Step 2: Answer
Step 3: Discovery
Step 4: Motions
Step 5: Pre-trial negotiations
Step 6: Trial
Step 7: Collecting the judgment
Step 8: Appeal
Each civil trial is unique. But there are common elements. This article looks at the 8 basic steps of any personal injury lawsuit, from filing a complaint to appealing a judgment.

A personal injury lawsuit begins when a private individual (the “plaintiff”) files a complaint against another person or entity (the “defendant”) seeking to be compensated for an injury allegedly caused by the defendant.

Let’s take a look at these steps in detail.

Enjuris tip: Want to find out what your state’s law is when it comes to personal injury lawsuits and civil cases? Visit our State Guides.

The first document filed in most personal injury lawsuits is called the “complaint.” The filing of the complaint effectively begins the lawsuit.

Most states have at least 3 different court systems where you might file your complaint. In almost all cases, there will be a “fee” for filing the complaint. This fee varies by state and court, but generally ranges from $30-$300.

The complaint will also contain a section at the end (usually called the “prayer for relief”) explaining what the plaintiff wants the court to do (e.g., enter judgment against the defendant).

It’s not enough to simply file a complaint with the appropriate court. The plaintiff has to make the defendant aware that the defendant is being sued. The document that helps accomplish this is called the “summons.”

Each state has specific rules for how service of process can be accomplished. For example, it’s generally unacceptable to simply mail the complaint and summons to the defendant.

It’s very important that the defendant is properly served. If they aren’t, the defendant can dismiss the lawsuit based on insufficient process. While you can generally re-file the lawsuit if this happens, it will cost you more money.

What’s more, the statute of limitations may run by the time you re-file.

Enjuris tip: Often, the website of the court in which you’re filing your complaint will have a “form complaint” and “form summons” that you can fill out if you’re representing yourself.

Once the complaint and summons are filed and served, the defendant must respond in a certain amount of time. This varies depending on the court (and sometimes the location of the defendant), but is usually around 21 days.

The defendant’s response to the complaint is called the “answer.” The answer addresses each paragraph of the complaint by admitting or denying the allegations contained in the paragraph.

Enjuris tip: For a sample answer to a complaint, click here.

An answer may also set forth various defenses (legal reasons why the defendant should not be held liable for the plaintiff’s damages).

Once the initial pleadings (complaint, summons, answer, counterclaim, etc.) have been filed, the parties begin the process of obtaining evidence from each other. This process is called “discovery.” The idea behind discovery is that both parties should have access to all relevant information.

Each party doesn’t just hand over evidence automatically. Instead, each party must request the information they want. There are 5 main tools used to request information in a personal injury case:

Keep in mind that discovery questions and requests must lead to the discovery of admissible evidence. If a question or request is improper (for example, it’s wholly irrelevant to the case or privileged), the responding party can object.

Enjuris tip: It’s important to be honest with your attorney throughout the discovery process. It’s also important to turn over all relevant information to your attorney. Hidden evidence never remains hidden and if your attorney doesn’t see it before the other side, you’ll be at a disadvantage. Download our free Documents & Evidence Checklist to get started.

Trials are expensive, time-consuming, and emotionally draining. As a result, good lawyers will try to resolve a case before it gets to trial. There are 3 primary ways to do this:

More reading: Mediation, Arbitration, or Going to Court: Which is Best?

In a civil trial, a judge or jury examines the evidence and decides whether the defendant should be held legally responsible for the damages alleged by the plaintiff.

Personal injury trials vary in length, but most are 1–7 days long. Tweet this

Congratulations! The judge or jury has awarded you money damages. Unfortunately, the defendant (now the “debtor”) doesn’t always follow the court order and pay the amount of the judgment. If this happens, you may have to take additional steps and incur additional legal expenses to collect the judgment.

Personal injury lawsuits can be lengthy and complex. Locate an attorney near you using our free online directory so that you can focus on recovering from your injury while your lawyer handles the legal headache.