No one ever imagines that they will be in a position to file a wrongful death lawsuit—of all the situations we can be in, this might be one of the worst because it means you’ve lost someone close to you in a tragic, senseless, and preventable way.

That’s because a wrongful death lawsuit is based on someone dying because of another person or entity’s negligence.

Whether a person’s death was caused by a car accident, slip-and-fall accident, medical malpractice or some other way, a few elements are necessary to claim negligence:

• Duty. This is usually easy to establish because it’s generally any link between 2 people or a person and an entity—and the people don’t have to know each other. For instance, any driver has a duty to another road user, whether it’s a pedestrian, bicyclist or vehicle occupant. The duty is to avoid driving or acting in a reasonably foreseeable way that could cause harm or injury.

As another example, a manufacturer has a duty to ensure that its products are safe for consumers when used in the manner for which they were intended. If a defective product or medical device resulted in a person’s death, the manufacturer could be found negligent.

• Breach. This is when the defendant did not adhere to their duty to avoid foreseeable harm. For example, if a driver is speeding or fails to stop at a red light (or commits any other traffic infraction), they have breached their duty of care to other road users. Even if they aren’t breaking traffic laws (but their driving is not as cautious as it should be), they can still be liable for breaching their duty if their action causes an accident or injury to another person.

• Causation. The breach needs to be the direct cause of the death in order for a plaintiff to receive damages. In other words, if the defendant caused an accident that landed a plaintiff in the hospital for a broken leg and the plaintiff then died of a heart attack a few hours later, it would be difficult to prove that the accident caused the plaintiff’s death (unless doctors could conclusively link it to the car accident several hours prior). The defendant might be liable for the broken leg but not for the heart attack or death.

But wrongful death lawsuits, though they follow the same concept, are a little different when it comes to damages.

In most states, a survivor may file a wrongful death lawsuit that seeks compensatory damages for the family of the deceased. This would include:

• Economic costs such as the loss of the deceased person’s income, benefits, pension and medical costs associated with the accident that caused their death, including funeral and burial costs

• Non-economic costs such as pain and suffering, emotional distress and loss of consortium, companionship and love

Alabama focuses on punitive damages for a wrongful death lawsuit. Punitive damages are usually awarded in addition to compensatory damages as a way to punish the defendant and deter them and other defendants from repeating the behavior that caused the person’s death.

An Alabama wrongful death award of punitive damages would be given directly to the decedent’s heirs, which are relatives such as children or a spouse.

The intent of this law is to compensate heirs for the defendant’s wrongdoing.

A survival action is based on the losses of the deceased person for the time between when the accident happened and when they died. For instance, if a person was injured in a car accident and endured surgery or other medical treatment to try to save them but later died from their injuries, compensation can be made to the survivors for those losses. It would be determined as the amount of compensation to which the person would be entitled if they had lived. This can include medical costs, pain and suffering, and other associated expenses.

Sometimes a survival action is the continuation of a personal injury claim that was made by the injured person before they passed away from their injuries.

The damages awarded in a survival action are shared differently than wrongful death damages.

Unlike a wrongful death lawsuit that has damages awarded to heirs, the damages from a survival action are provided to the estate and then dispersed. A beneficiary who is named in the will but is not an heir can benefit from these damages because the purpose of this lawsuit is to receive damages that the deceased person deserved, and it’s distributed as they would have wanted if they had been alive to do so.

Statute of limitations for an Alabama wrongful death lawsuit

Most Alabama wrongful death lawsuits must be filed within 2 years from the date of the person’s death. A statute of limitations is the deadline by which you’re required to file a claim—if you miss that date, the court can refuse the case.

If the deceased person was a minor, their parents have 6 months from the date of death to file a claim. If the time period is longer than that, it must be filed by their personal representative.

There are some situations when a person could be both criminally responsible and civilly liable for another person’s death.

For example, if the death was the result of a drunk driving accident, the driver could be charged with criminally negligent homicide or manslaughter. Only a government prosecutor (like a district attorney) can charge someone with a crime. A conviction might help the family of the deceased feel that justice has been served or get a sense of closure, but it doesn’t provide financial relief.

The only way to recover costs is to file a civil lawsuit, which is separate from any criminal proceeding.

Wrongful death claims can be complex, not just because of the evidence needed to prove liability but also because of the amount of money that could be involved.

If a person dies with years or decades of expected income and benefits ahead of them, that could be a tremendous loss to their family. It would be very difficult for most people to accurately calculate the amount of projected earnings that they would make over the course of their lifetime, but a lawyer hires actuaries and other financial experts who can determine what a fair amount would be for the family.

In addition, punitive damages are hard to quantify, but your lawyer will follow 1 of several methods that the courts use to figure out an appropriate amount.

You can use the Enjuris law firm directory to find an Alabama wrongful death lawyer who can help your family through this trying time. 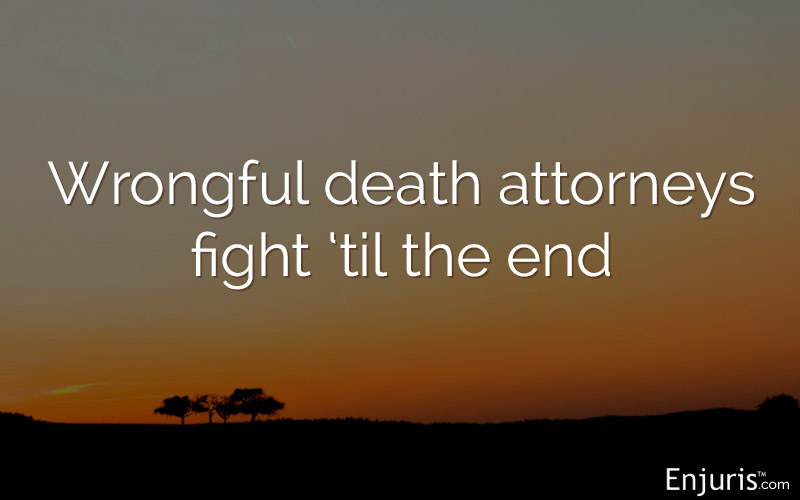 Have you lost a loved one in a preventable accident?

Wrongful death lawsuits are particularly difficult because in the face of such a tragedy, families and loved ones must pick up the pieces of their life despite their grief and soldier on through the legal system, meeting each deadline and acting like it’s any other lawsuit. These are usually filed by husbands, wives, children, parents and siblings of the deceased with the help of a legal representative. Read more

Did you know that wrongful death law varies by state?