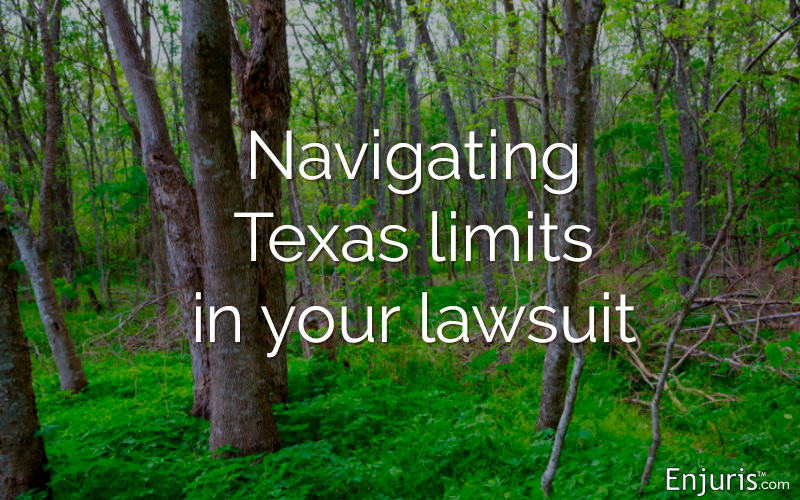 If you are hurt in a serious accident, you may fret about how you are going to pay your bills and recover from your injuries.

First, the good news: In Texas and all states, you have the right as a personal injury victim to sue for economic and non-economic damages.

And now, the bad news: There are laws in Texas that place a cap on how much money you can recover in some personal injury lawsuits.

The Texas caps primarily deal with the type of damages and who caused the injury.

Types of damages you can sue for

In Texas, you can be compensated for three major types of damages:

After a car accident where you suffered a broken arm and leg, you will have medical expenses and lost income, among other things.

These are economic damages. That is, the amount of loss may be easily calculated.

In Texas, you have the right to recover the following economic damages:

Non-economic damages are more difficult to calculate than economic damages. These types of damages include compensation for the physical, mental and emotional pain of your injuries, among other things.

Enjuris Tip: Many defendants and insurance companies can be ‘encouraged’ to offer a fair out-of-court settlement once they see that you have retained economic experts to demonstrate big non-economic damages. Jurors are human beings, and serious personal injuries can have an emotional effect that increases the size of your financial award. However, punitive damages are capped in Texas. See how much is my injury worth?

Texas state law states that you may recover non-economic damages for your:

Non-economic damages are extremely subjective in nature. The jury will have to rely on its belief about what these damages are worth in dollar terms. See how pain and suffering is calculated in Texas.

There are currently no caps on pain and suffering (non-economic damages) in Texas, except in medical malpractice cases.

Texas has caps in place to limit the maximum amount plaintiffs may receive in non-economic damages in medical malpractice cases. This cap is stipulated in the Medical Malpractice and Tort Reform Act of 2003 also known as House Bill 4 (“HB4”).

Enjuris Tip: See how the Medical Malpractice and Tort Reform Act of 2003 has changed the medical and lawsuit landscape of Texas as reported by Insurance Journal and the Social Science Research Network.)

You may not sue doctors or other individual health care providers for more than $250,000 in total, even if you pursue a medical negligence case against multiple doctors.

You can cannot recover more than $250,000 from each healthcare facility that was involved. And your non-economic damages award may not exceed $500,000 among all of the medical facilities involved in the case.

Therefore, the maximum amount you may receive for non-economic damages in a medical malpractice lawsuit is $750,000.

The maximum amount you may receive for non-economic damages in a medical malpractice lawsuit is $750,000.
Tweet this

Keep in mind that these figures will be adjusted for inflation, so the amounts will be much higher now. Please discuss with your attorney any caps and upper limit values that will apply to your case.

Punitive damages are awarded in personal injury cases where the actions of the defendant involved fraud, malice, or gross negligence. For instance, if a drunk driver sped through a stop sign and slammed into your car and caused you massive internal injuries, this could qualify you for punitive damages.

Punitive damages in Texas are used to ‘send a message’ to the person who has acted in a reckless, grossly negligent manner that warrants additional economic punishment. They will only be awarded if other damages are also awarded.

Punitive damages are capped in Texas, as listed in the Texas Statutes here.

Note that the cap does not apply if the act was a felony.

Learn more about the tort reform bill that led to these caps in Texas.

In Texas, government organizations and entities are immune from liability in personal injury lawsuits. There are cases where they may have limited liability, but there are caps in place for how much they may be sued for.

If you suffer an injury due to the negligent actions of an employee of the state or a municipality, the cap for every person involved is $250,000, and cannot go over $500,000 total for a single event.

For example, if a police officer on duty slams into your car at an intersection and hurts you and your three children, your total damages cannot exceed $250,000 per person. Also, the distribution among the four of you would actually be only $500,000, which is the per event maximum limit.

Texas officials have claimed that these caps have been passed into law to prevent frivolous lawsuits.

Needless to say, damage caps are highly controversial in Texas and in most states. It is a smart idea to talk to an experienced personal injury attorney licensed in Texas about your case and what you may face in terms of damage caps.