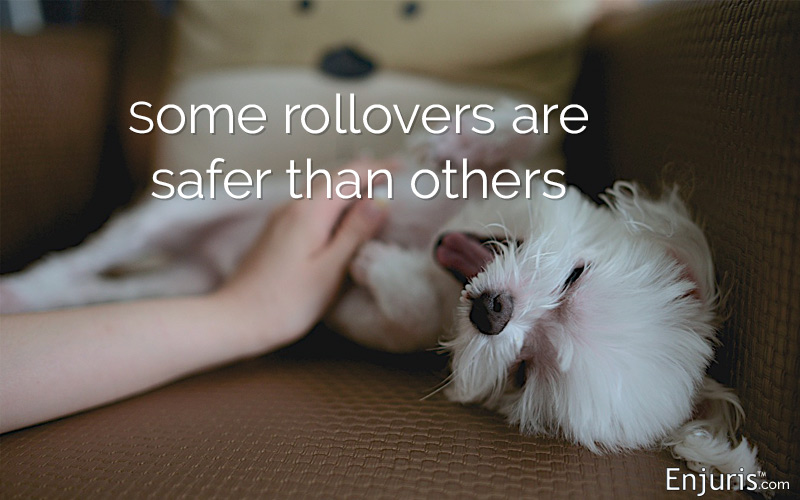 A rollover accident occurs when a vehicle rolls onto its side or roof during a crash. Rollovers are particularly violent in nature and, oftentimes, the vehicle's occupants are partially or fully ejected from the vehicle.

Rollovers sound serious, and they are.

Fortunately, if you're injured in a rollover accident in Texas, you may be able to receive financial compensation for your injuries by filing a personal injury lawsuit.

The popularity of sport utility vehicles (SUVs) and other light duty trucks has increased dramatically over the last 2 decades. The prevalence of these vehicles is troublesome given that they're particularly prone to rollover accidents.

Here are some other unsettling facts about rollover accidents in the United States:

Under the right circumstances, any vehicle can rollover. However, taller, narrower vehicles (such as SUVs, pickups, and cargo vans) are more likely to roll over because they have a higher center of gravity.

In general, there are 3 types of rollover accidents:

A number of factors can increase the chances of a rollover, including:

As you can see from the list of factors that contribute to rollover accidents, many crashes can be avoided by understanding how your vehicle operates and obeying the rules of the road.

In the most severe cases, rollover crashes result in death. Even when passengers survive a rollover, they risk catastrophic injuries, including:

Can you receive compensation for a rollover accident?

Whether or not you receive compensation after a rollover accident depends largely on who was at fault for the accident.

If you caused the accident, you'll likely have to pay for your injuries out of pocket (unless you have optional insurance coverage, such as personal injury protection, or PIP, which covers your damages regardless of fault).

If, on the other hand, some other person is responsible for your injuries, you may be able to file a personal injury claim against them. Potential at-fault parties include:

In order to recover damages from another party, you generally have to show that the other party was negligent. That means you have to prove:

In some cases, proving that a person was negligent is straightforward.

For example, if another vehicle is driving the wrong way on a road and causes you to swerve out of your lane, hit a guardrail, and rollover, it won't be too difficult to prove that the other driver was negligent.

However, in other cases, negligence can be more complicated.

If you're able to prove that another person was responsible for your accident, you can recover economic damages (medical expenses, lost wages, etc.) and non-economic damages (pain and suffering, etc.).

Enjuris tip: Find out how much your personal injury claim is worth in Texas.

What should you do after a rollover accident?

If you're involved in a rollover accident, make sure you're out of harm's way and then take the following steps: