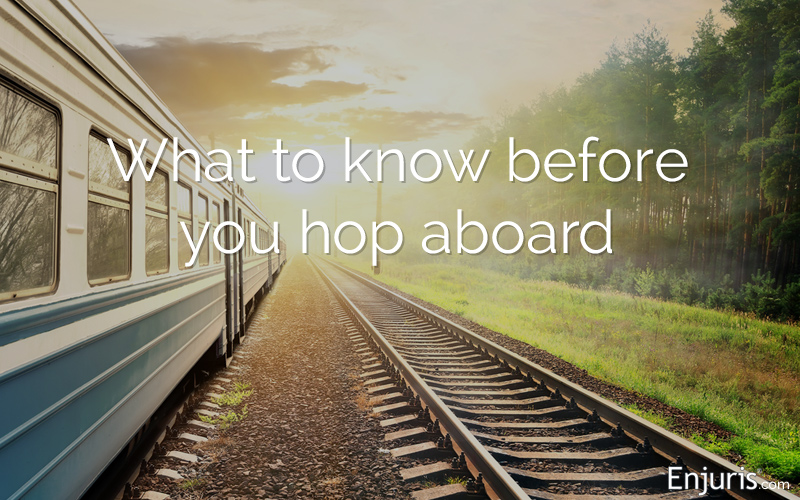 What railroad employees, passengers, and others impacted by a train accident should know before filing a lawsuit

Train accidents tend to be more complicated than car accidents when it comes to recovering damages. Here’s a look at how South Carolina and federal laws, including the Federal Employers Liability Act, may impact your chances of recovery.

Traveling by train is one of the safest ways to travel in South Carolina, but high-profile train crashes in the Palmetto State have shown that your safety is not guaranteed.

When train accidents happen, injured passengers and employees may be able to recover damages. However, there are a number of things to consider before filing a claim.

What trains are active in South Carolina?

The most common types of trains that still operate in South Carolina include:

How common are train accidents?

Statistically, traveling by rail is one of the safest ways to travel.

Over a recent 10-year period in South Carolina, there were 193 train accidents. Those accidents resulted in 341 injuries and only 9 deaths.

Much more dangerous than being a passenger on a train is crossing a train track on foot or in a vehicle. Consider the following statistics:

How do train accidents happen?

The Federal Railroad Association (FRA) has identified the most common causes of train accidents in the United States as:

The National Transportation Safety Board (NTSB) conducted an investigation and found that a switch (a mechanism allowing trains to be guided from one track to another) had diverted the Amtrak from the main line to a low-speed track to the west of the main line, where it slammed into the parked CSX Transportation freight train.

Real Life Example:Phillip Woodruff, from the town of Prosperity, was hit and killed by a CSX Transportation freight train while walking along railroad tracks in Newberry County.

Phillip was wearing headphones and walking with his back to the train at the time of the accident. Train conductors blew the horn and tried to stop, but couldn’t.

Phillip died at the scene at the age of 16. His death was ruled an accident.

What types of injuries are caused by train accidents?

Believe it or not, most train accidents are relatively harmless. This is due in part to the fact that most trains don’t carry passengers, passenger cars are designed to survive some level of impact, and rails generally run through unpopulated places.

Some train accident injuries are completely unexpected, as was the case in the Graniteville train crash.

Real Life Example:Graniteville train crash
On January 6, 2005, a Norfolk Southern train slammed into a locomotive tied down on a side track in Graniteville, South Carolina.

The impact ruptured a freight car loaded with 90 tons of chlorine, releasing a geyser of roughly 60 tons of pressurized liquid gas.

“It was literally like sticking your head into a bottle of bleach,” said Troy Smith who worked about 150 yards from the wreck. “It burned your eyes. It hurt to breathe.”

In addition to the 9 people killed as a result of the impact, 87 people were hospitalized, 851 were treated, and more than 7,000 people were instructed to shelter in place.

In South Carolina, negligence is established by proving the following elements:

How do you know if a person or entity breached their standard of care?

In most negligence cases, the duty of care owed is that of a reasonable person. In other words, a person or entity must exercise the level of care that a “reasonable and prudent” person would exercise to avoid harming passengers. If the person or entity fails to do so and the failure causes your injury, they are negligent.

However, train operators are considered “common carriers” and therefore owe a higher degree of care. Specifically, train operators must exercise the “utmost caution characteristic of a very careful person.”

Depending on the nature of the train accident, one or more of the following parties may be liable:

Real Life Example:Greg Williams, a water department worker from Columbia, South Carolina, died when his snowplow truck was struck and dragged by a 35,000-pound maintenance train operated by CSX Transportation.

The court found that CSX Transportation was negligent because it had violated state law by failing to clear overgrown scrub oaks and other vegetation at the rail crossing, and the vegetation blocked Greg’s view of the train.

How does an injured passenger recover damages in South Carolina?

If you’re injured in a train accident as a passenger (or as someone unassociated with the train—such as someone crossing the train track), you’ll need to file a personal injury lawsuit in the appropriate court to recover damages.

In South Carolina, injured plaintiffs can recover the following types of damages in a personal injury lawsuit:

Enjuris tip:Learn more about the types of damages you can recover in a South Carolina personal injury case, including the damage caps that may apply.

There are many important factors to keep in mind when filing a personal injury lawsuit in South Carolina—one of which is time.

You only have 3 years from the date of your injury to file your lawsuit (or 2 years if the lawsuit is against the government).

This time limitation is called the statute of limitations, and your claim will be forever barred if you fail to file your lawsuit within this legal deadline.

What if a family member is killed in a train accident?

If someone is killed in a train accident, the family of the deceased can file a wrongful death lawsuit against the responsible party. Just like a personal injury lawsuit, the family will need to prove liability. Once liability is proven, the family can recover compensation for the loss of emotional, financial, and other support.

How does an injured railroad employee recover damages in South Carolina?

How to prepare for your meeting with a South Carolina attorney

An experienced South Carolina attorney may be able to help you recover damages after a train accident, whether you plan to file a personal injury lawsuit or a FELA claim.

Even if you’re not sure that you need an attorney, it’s a good idea to meet with one to find out your options and learn about the legal challenges you might encounter. Most initial consultations are free and the attorney will be able to review the facts of your case and tell you whether you have a compensable claim.

To get the most out of your initial consultation, be sure to bring all the documentation you have related to your case.

Additionally, you’ll want to prepare some questions for the attorney to help you decide whether the attorney is right for your case.

Ready to schedule your appointment with a South Carolina attorney? Use our free online directory to locate an attorney near you.