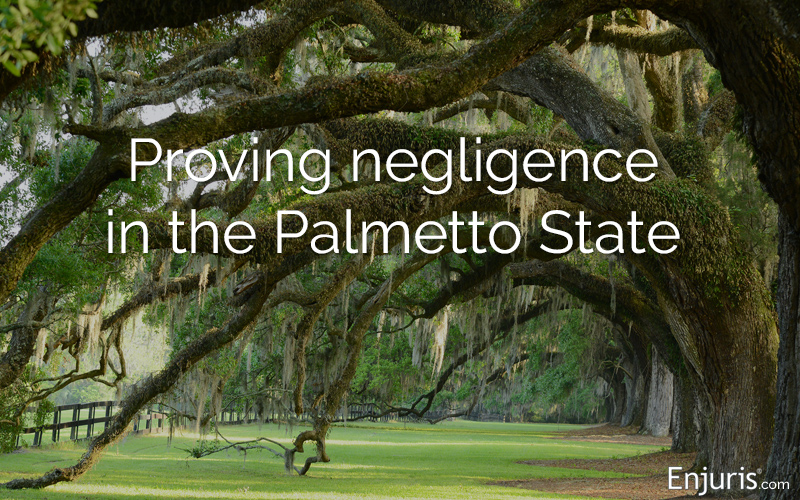 To file a successful personal injury lawsuit, you need to be able to set forth a legal theory and show how the facts of your case support that legal theory.

The legal theory used in the vast majority of personal injury cases is negligence. With that in mind, let’s take a look at negligence laws in the Palmetto State.

“Negligence” is the failure to exercise the appropriate standard of care. The specific standard of care that applies depends on the relationship between the plaintiff and the defendant.

Establishing the elements of negligence in South Carolina

To establish a successful negligence claim, you must prove the following 3 elements:

Let’s take a closer look at each of these elements.

In order to sue someone for negligence, you have to establish that the person (or entity) owed you a duty to adhere to some standard of care.

In general, people owe a duty to adhere to a standard of reasonable care while performing acts that could foreseeably harm others.

To put it another way, if a person is doing something that might harm others (such as driving a car), the person has a duty to act as a reasonable person would act (by, for example, not driving while intoxicated).

In certain cases, the standard of care owed is more specific.

Several hours later, 2 automobiles entered the intersection at approximately the same time. The view was somewhat obstructed and neither driver saw the other until the collision was inevitable.

A passenger in one of the vehicles suffered permanent paralysis when she was impaled on the gearshift lever. The passenger sued the construction company, alleging that the company was negligent for removing the stop signs.

Just because someone acted carelessly, doesn’t mean they were negligent in a legal sense. In order to be negligent, the defendant’s carelessness must have been the cause of your injury.

To prove causation, you must establish both causation in fact and legal cause.

Causation in fact is proved by establishing that your injury would not have occurred but for the defendant’s negligence. Legal cause is present if the injury was foreseeable. An injury is foreseeable if it’s the natural and probable consequence of a breach of duty.

Let’s look at a couple of examples to distinguish causation in fact from legal cause:

Bill runs a red light and slams into Jennifer’s car. The impact of the collision causes Jennifer’s knee to strike the steering column. The knee injury requires physical therapy.

What’s more, there is legal cause because it was foreseeable that running a red light would result in a car accident.

Bill runs a red light and slams into Jennifer’s car. Jennifer is uninjured. When she exits her car to check on Bill, she slips on a patch of ice and falls down a steep bank and into a creek. Jennifer suffers a mild brain injury as a result of hypothermia.

However, a court is unlikely to find that there is legal cause because it wasn’t foreseeable that running a red light would result in another driver developing hypothermia.

For example, assume there are 3 hunters in the woods, and 2 of the hunters negligently shoot their guns in the direction of the 3rd hunter at the same time. The 3rd hunter is hit with a bullet but he can’t establish from which gun the bullet came. In this situation, both defendants would be subject to liability unless either of them is able to prove that they didn’t cause the injury.

What is gross negligence?

In South Carolina, punitive damages are only available if the defendant acted with “gross negligence.”

So what is gross negligence?

The South Carolina Supreme court defined gross negligence as “the failure to exercise even slight care.”

The term has also been defined by South Carolina courts as “the intentional, conscious failure to do something which it is incumbent upon one to do or the doing of a thing intentionally that one ought not to do.”

To put it simply, gross negligence requires something more than carelessness.

Real Life Example: Zackary Steinke, a 17-year-old bungee jumper, died when the steel cage in which he was riding fell 160 feet to the ground at Beach Bungee, an attraction near Myrtle Beach. The ride was subject to the South Carolina Amusement Rides Safety Code and regulated by the Department of Licensing.

The South Carolina Supreme Court found that the Department of Licensing was grossly negligent.

So when does negligence per se apply in South Carolina?

Negligence per se applies when the defendant breaks a law that:

You might wonder if you can still recover damages if you were partially at fault for your accident. The answer varies by state.

In South Carolina, a plaintiff can recover damages so long as they’re not more than 50% at fault for the accident. However, their damages are reduced by their percentage of fault. This is called the modified comparative fault rule.

Jason is texting while driving. As a result, Jason doesn’t see Linda, a pedestrian who, without looking, suddenly runs into the middle of the road. Jason swerves at the last second and crashes into a telephone pole.

Jason suffers a whiplash injury and sues Linda for $100,000.

Under South Carolina’s modified comparative fault rule, Jason is only able to recover $60,000 of his damages.

For most negligence cases in South Carolina, you have 3 years from the date of the injury to file a lawsuit.

There’s an important exception to the 3-year statute of limitations for negligence. If you're suing the local, state, or federal government, you must file your lawsuit within 2 years of the injury (although it can be extended to 3 years if you file a “verified petition” within 1 year).

Steps to take if someone’s negligence caused your injury

If you believe someone’s negligence caused your injury, there are a few steps you can take to preserve your rights and maximize your chances of recovery:

Ready to reach out to an experienced personal injury attorney near you? You can find one using our free online directory.