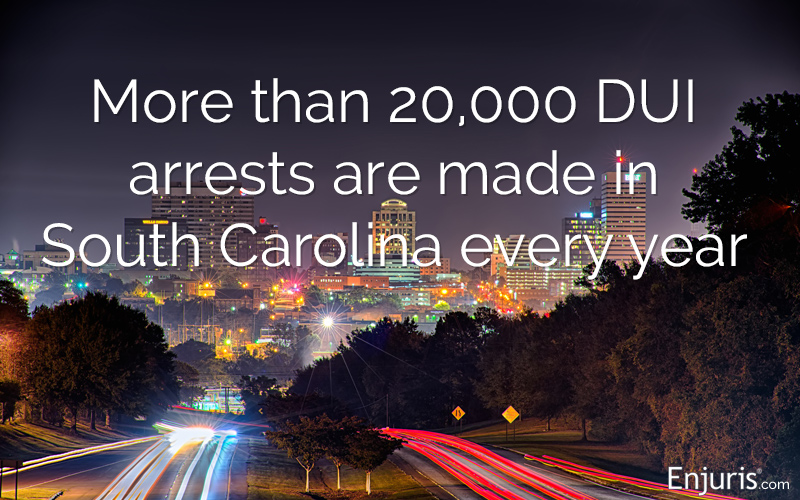 When it comes to drunk driving accidents, South Carolina is the 5th most dangerous state in the country.

In this article, we’ll take a look at drunk driving accidents in South Carolina, including the criminal and civil consequences of driving under the influence.

In South Carolina, you’ll receive a citation for driving under the influence (DUI) if your blood-alcohol content (BAC) is 0.08% or higher.

If you’re a commercial driver, you’ll receive a DUI if your BAC is 0.04% or higher.

If you’re under the age of 21, you’ll receive a DUI if any alcohol is found in your system.

It’s important to recognize that the BAC limits listed above are for per se violations. In other words, if your BAC is above the legal limit, you can be charged with a DUI regardless of whether there’s any additional evidence.

However, you can be charged with a DUI even if your BAC is BELOW the legal limit if evidence suggests that your driving ability is “materially and appreciably impaired” due to alcohol.

What about other drugs?

South Carolina’s DUI laws don’t just apply to alcohol. A person can receive a DUI if they’re under the influence of any drugs (marijuana, cocaine, over-the-counter medication, etc.) that cause impairment to the extent that their faculties to drive a motor vehicle are “materially and appreciably impaired.”

Do you have to submit to a breath, blood, or urine test if a police officer pulls you over under the suspicion that you’re driving while intoxicated?

Under South Carolina’s implied consent law, you implicitly consent to a breath, blood, or urine test for the purpose of determining the presence of alcohol or drugs in your system merely by getting behind the wheel of your vehicle.

If you refuse to submit to testing, you face an automatic 90-day suspension (180 days if you have a prior conviction) of your driving privileges.

Penalties for driving under the influence

The penalties for a DUI depend on whether the driver has any prior convictions and whether the incident caused an accident that resulted in bodily harm or death.

If the driver causes an accident that results in great bodily harm while under the influence, the driver (regardless of any prior offenses) faces:

If the driver causes an accident that results in death while under the influence, the driver (regardless of any prior offenses) faces:

Civil consequences of driving under the influence

A driver who causes an accident while under the influence is automatically considered negligent under South Carolina’s negligence per se statute. This means the driver is liable for any damages they cause, including:

Enjuris tip:Learn more about the types of damages available in a South Carolina personal injury case.

The lawsuit was filed against Yuriy Karpik who was intoxicated when he lost control of his vehicle and collided with the car containing Grace.

In addition to civil liability, Yuriy was charged under South Carolina’s felony DUI statute and the state’s open-container law.

In South Carolina, an establishment can be held liable for damages caused by an intoxicated patron if the following conditions are met:

Similarly, if a social host intentionally serves alcohol to a person under 21 years old, the host can be held liable to the minor or any third person who may be harmed due to the minor’s intoxication.

Facing factsWith respect to drunk driving, the most dangerous time to be on the road in South Carolina is between Christmas and New Year’s. According to SafeWise, an average of 43.5% of the U.S. population binge drinks during the holiday.

Is it illegal to have alcohol in my vehicle?

It’s not illegal to transport a closed container of alcohol in a vehicle in South Carolina. However, South Carolina law prohibits drivers from having an open container of alcohol in a vehicle (except in the trunk) while the vehicle is in motion. If a driver is convicted of violating this law, they face a fine of up to $100 or imprisonment for up to 30 days.

How do I spot a drunk driver while I’m driving?

Mothers Against Drunk Driving (MADD) has compiled some common signs of driving while under the influence to help you spot a drunk driver:

If you spot a drunk driver, it’s a good idea to pull over (to keep yourself safe) and call the police (to keep others safe).

Ready to talk to an attorney about your drunk driving accident? Use our free online directory to find an experienced South Carolina personal injury attorney today.