Accident Help (Home) » Injury Blog » What Is Negligence Per Se in a Personal Injury Case? 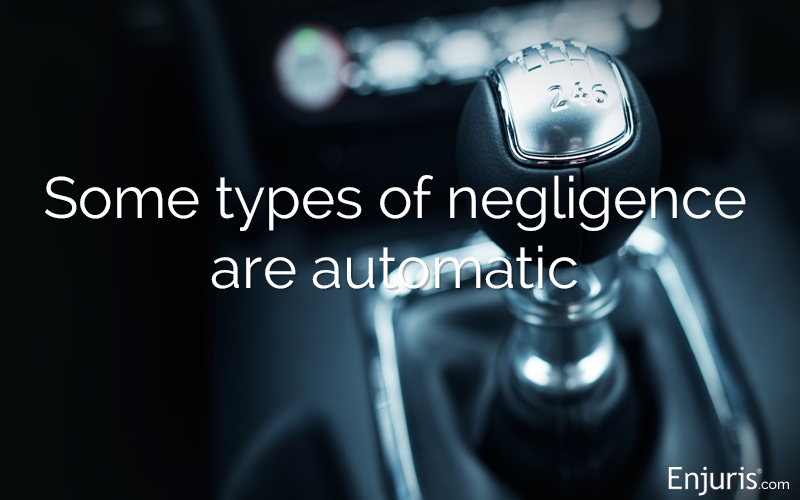 “Negligence per se” is a legal doctrine whereby an act is considered negligent if the act violates a statute. It’s an important doctrine to understand because, if it applies to your personal injury lawsuit, you won’t have to prove fault as much as you normally would to receive compensation.

In a traditional negligence case, you must prove the following 3 elements:

The first 2 elements can be difficult to prove.

In some cases, it’s clear that a defendant owed you a duty of care and that their actions breached that duty of care. But in other cases, it’s less obvious. Either way, the elements must be proven (and that takes time and money).

Enjuris tip: Negligence per se if effectively a form of strict liability.

When does negligence per se apply?

In the vast majority of jurisdictions, negligence per se applies if:

Examples of negligence per se

Still confused about whether negligence per se applies to your case?

In the state of Arizona, a statute requires all vehicles to come to a complete stop at a “school crossing” during school hours. The intent of the law is to keep pedestrians safe from vehicles using the road.

One morning, a teacher uses a school crossing during school hours. A driver fails to stop at the crossing and collides with the teacher. The teacher sustains a serious back injury.

In this example, negligence per se would apply because (1) the driver violated a statute (i.e., the school crossing statute), (2) the intent of the statute was to prevent the injury that occurred (i.e., a pedestrian getting hit by a car), and (3) the teacher was in the class of people the law was intended to protect (i.e., pedestrians).
Example #2:

In California, a statute requires that all livestock being transported by boat must be kept in pens. The statute was enacted to prevent the spread of infection among animals.

In this example, negligence per se would NOT apply because, even though the shipping company violated the statute, the injury that occurred (getting washed overboard) was not the injury the statute was intended to prevent (getting an infection).

Think negligence per se might apply to your case? Not sure if it applies?

Use our free lawyer directory to locate a personal injury attorney in your area.