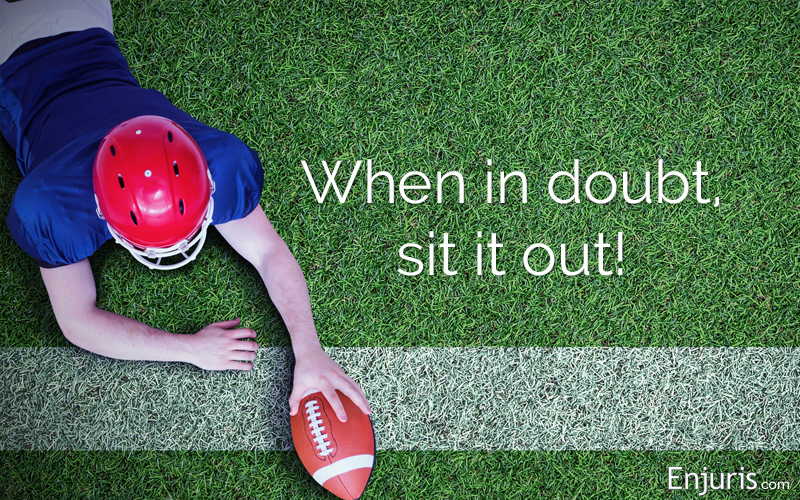 Athletes often feel intense pressure to return to play after getting injured. Those who play through injuries are lauded as “leaders” and “tough competitors.”

Second impact syndrome is a reminder that all head and brain injuries are serious, and sometimes the bravest thing an athlete can do is sit on the sidelines.

What is second impact syndrome?

The term “second impact syndrome” refers to a sequence of events in which a person who sustains a mild head injury before a concussion has fully healed can be seriously injured or even killed.

To put it another way:

A person who sustains a concussion may develop cerebral edema (swelling due to trapped fluid buildup around the brain). The brain quickly compensates for the massive swelling by limiting cerebral blood flow. This altered state makes the brain more vulnerable and susceptible to additional impacts of even less intensity.

After a second impact of less intensity, diffuse swelling (widespread swelling) and brain herniation (pressure that moves brain tissues) can occur. When this happens, death typically occurs in a matter of 2-5 minutes, usually without time to stabilize or transport the person to the hospital.

Jason is a quarterback for his high school football team. In the first game of the season, Jason is sacked and suffers a concussion. Jason is pulled from the game and does not return.

Following the game, the coaches fail to send Jason to the hospital or monitor his symptoms. Three days later, Jason shows up to practice. He tells the coaches that he feels great. The coaches let Jason practice and he suffers a very minor blow to the head. Although the impact is minor, Jason falls to the ground.

How common is second impact syndrome?

Facing factsAccording to a survey published in the Journal of Sport & Social Issues, roughly 70% of NCAA Division I athletes have been injured at least once, and more than half of those injured felt pressure to play while injured.

Head injuries, on the other hand, are unfortunately quite common.

The Centers for Disease Control and Prevention estimates that about 1.1 million patients with nonfatal traumatic brain injury (TBI) are treated in emergency departments annually. An estimated 300,000 TBIs are mild to moderate and roughly 235,000 require hospitalization.

Concussions affect about 128 people per 100,000 in the United States annually. Young children have the highest rates of concussion, with sports and bicycle accidents accounting for the majority of cases. Falls and vehicular accidents are the most common causes of concussion in older adults.

The most well-known example of this is Washington’s Zack Lystadt law (sometimes called the “shake-it-off law”).

Zack Lystadt was a high school football player who sustained a head injury when his head struck the ground after tackling an opponent. A video of the game shows Zack grabbing his head and rocking back and forth. Despite the injury, Zack returned to the game after sitting out a few plays.

The following quarter, Zack collapsed on the field and was airlifted to Harborview Medical Center where he underwent surgery to remove the left and right side of his skull in order to relieve the pressure from his swelling brain.

Zack suffered permanent brain damage as a result of the injury and it was nearly 3 years before he was able to stand, with assistance, on his own.

The state of Washington passed the Zack Lystadt law in 2009. The law requires that any youth showing signs of a concussion must be examined and cleared to play by a licensed healthcare provider trained in evaluating concussions before being allowed to return to the game.

Some sports injuries, particularly in contact sports like football, are inevitable. A player might break their finger diving for a ball or injure their shoulder getting tackled. However, when an athlete suffers an injury as a result of someone else’s carelessness, the athlete (or surviving family member) may be able to sue for negligence.

Let’s take a look at some parties that may be liable in a second impact syndrome lawsuit:

Coaches have a legal duty to exercise reasonable care to prevent foreseeable risks of harm to their players. A coach may be liable for a player’s injuries if they breach this duty by, for example, forcing a player to return to a game when they’re showing signs of a concussion.

Real Life Example:As a freshman football player for La Salle University, Preston Plevretes sustained a concussion during practice. Despite headaches and dizziness, he was cleared to play against Duquesne 2 weeks later by La Salle’s athletic trainer.

In the game against Duquesne, a hard block during a punt return knocked Plevretes unconscious momentarily. He regained consciousness for several minutes and then collapsed and lapsed into a coma due to swelling of the brain. Although Preston’s lawyer said no official diagnosis was ever given, the events were consistent with second impact syndrome.

Preston filed a lawsuit against the school alleging that he suffered second impact syndrome. The lawsuit alleged that most of the immediate care and advice provided to Preston was from a student-health nurse rather than a trained expert in sports-related concussions, and that no proper neuropsychological testing was administered. In short, the lawsuit failed to implement or follow appropriate concussion protocols.

Other athletes may be liable, but only if their actions were outside the scope normally permitted by the sport.

A manufacturer might be liable under a product liability claim if the manufacturer sold a product (such as a football helmet) that was defective, lacked proper warnings, or was unreasonably dangerous.

A medical malpractice claim might be appropriate if a doctor failed to properly diagnose a football player’s condition or gave improper advice.

Real Life Example:Derek Sheely was a Frostburg State football player who died during a 2011 practice as a result of second impact syndrome.

Derek’s family filed a wrongful death lawsuit against the NCAA, Frostburg State coaches, an athletic trainer, and the helmet manufacturer. The lawsuit alleged that school employees failed to treat Derek’s initial injury and that the NCAA failed to implement adequate concussion protocol rules.

On the eve of trial, the parties settled the wrongful death lawsuit for $1.2 million. In addition to the monetary payment, the settlement provided that the defendants would take certain steps aimed at increasing awareness and research about concussions.

In a second impact syndrome case, you’re entitled to compensation from the person or entity legally responsible for your injuries. The legal term for this compensation is “damages.” Exactly what damages you can recover varies from state to state, but you can usually recover:

Ready to contact a lawyer about a possible second impact syndrome case? Use our free online directory to schedule your initial consultation today.

Injured and need a lawyer?

Find a top-rated personal injury attorney in your area.
Find the best attorney near me
Still not finding what you need?
Check out our other articles on head & brain injuries.