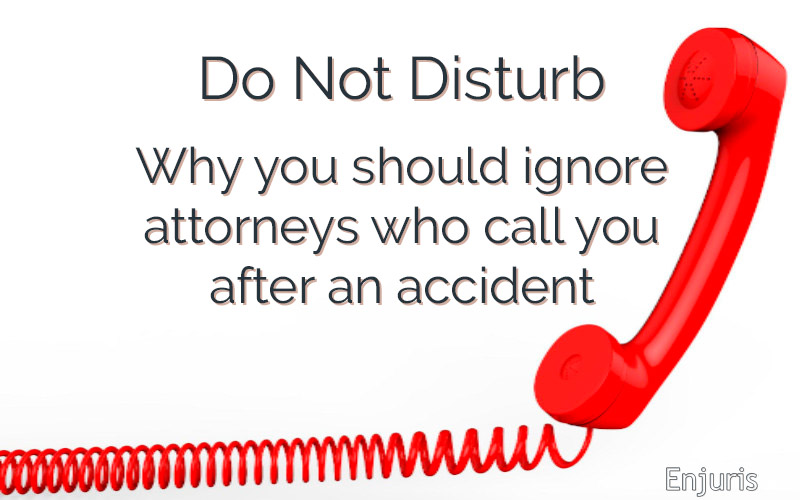 First-time car accident victims are not only dealing with physical and emotional distress, they are often navigating the legal system for the first time. Some find themselves hounded by unscrupulous attorneys who obtained their contact information illegally, commonly referred to as “ambulance chasers.”

After being rear-ended while driving home from work, Stacie Burgess was shocked to start receiving calls from lawyers offering to represent her the very next day. “I couldn’t believe the amount of calls I got, it seemed like they were privy to information from my 911 call or a police report.”

The calls left her feeling very agitated, on top of all of the other emotions that come along with being in an accident for the first time, Stacie said.

If a lawyer calls you after an accident, they have likely received your contact information through unethical methods, said Keith Watters of Keith Watters & Associates. These types of lawyers are considered “runners” or “solicitors” who will likely resell your case if you contract services with them.

“If an attorney calls you, they probably got the information improperly from the police or hospital,” Watters said. “There are a lot of payoffs in this field and if a lawyer is willing to pay for information to get a client, that is a sign right there that the person is probably unethical.”

Falling victim to the predators

Lawyers shouldn’t be soliciting clients as a general rule, so receiving an unexpected phone call from an attorney should be a warning sign for accident victims.

Many people are unaware that this practice is illegal and end up using the attorney’s services.

A WXYZ Detroit story looks at the issue of ambulance chasers in that city, where accident victims are often targeted. New technology has allowed ambulance chasers to find victims even more easily, according to the report.

“Derrick” was an accident victim who got a phone call within 24 hours of being hit while driving. The attorneys who contacted him provided transportation to take Derrick to a high-price medical clinic and then ended up referring his case elsewhere.

Derrick later learned that those calls broke a Michigan state law against solicitation, which is punishable by jail time and up to $60,000 in fines. Derrick later found his own lawyer to handle his accident and filed a complaint with the attorney grievance commission against the predatory attorney.

Attorney Daniel Romano told WXYZ that he suspects police officers, emergency responders, and even hospital workers could be turning over personal information to unscrupulous attorneys.

In Stacie’s case, she ended up researching and finding her own firm, but she understands why some people fall prey to these scammers. “You just don’t know what to do when it is your first time in an accident. The ambulance chasers to me are just not reputable,” she said.

The American Bar Association’s (ABA) “Model Rules for Professional Conduct“ provide strict guidance on how lawyers may solicit clients. An infraction could cost an attorney their law license. These rules, which were adopted by each individual state, regulate that:

(a)  A lawyer shall not by in-person, live telephone or real-time electronic contact solicit professional employment when a significant motive for the lawyer’s doing so is the lawyer’s pecuniary gain, unless the person contacted:

(1)  is a lawyer; or
(2)  has a family, close personal, or prior professional relationship with the lawyer.

(b)  A lawyer shall not solicit professional employment by written, recorded or electronic communication or by in-person, telephone or real-time electronic contact even when not otherwise prohibited by paragraph (a), if:

In summary, the rules state that attorneys cannot contact clients if their primary motivation is to make a profit. However, there are exceptions if the potential client is a lawyer, or a person has a familial or professional relationship with the attorney.

Find your own law firm

Instead of falling prey to predatory attorneys, Keith recommends that accident victims find their own representation through referrals or research and seek someone who has extensive experience in the personal injury and car accident fields.

Have you been contacted by an attorney after an accident? Did you regret accepting their services? Please share your story below.