Accident Help (Home) » Injury Blog » Can I Sue My Veterinarian for an Injury to My Pet? 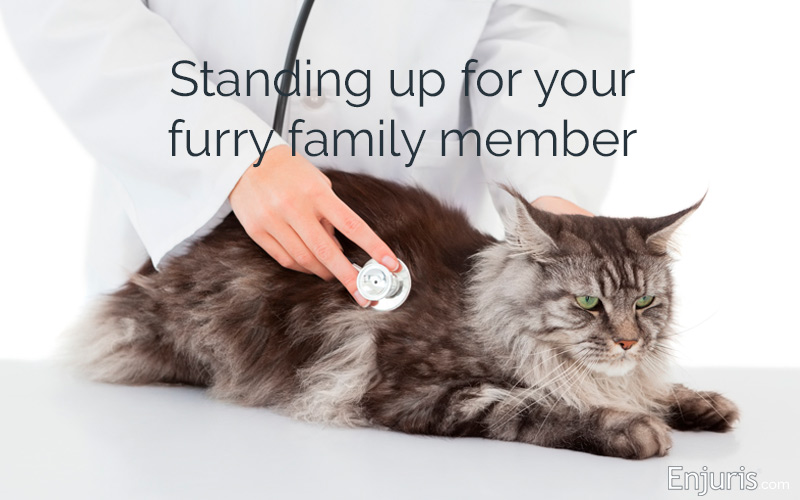 You bring your animal to your veterinarian for a routine procedure and something goes horribly wrong.

Table of Contents + show
Veterinary statistics
Can I sue my veterinarian?
Defenses to veterinary malpractice
Veterinarian negligence damages
Do I need a lawyer?

According to the United States Bureau of Labor Statistics, there are roughly 70,000 veterinarians in the country.

Statistics from the American Veterinary Medical Association indicate that pet owners spend more than $40 million taking their pets to the vet. Costs for many veterinary procedures rival those of medical procedures for humans.

Facing factsIt’s difficult to obtain statistics on the exact number of lawsuits filed against veterinarians for malpractice, but 1 source estimates that there are more than 2,000 cases of veterinary malpractice filed in US courts every year.

Can I sue my veterinarian?

Yes! If your veterinarian commits malpractice, you can sue them for damages related to the injury of your pet. Veterinary malpractice is a lot like medical malpractice. To establish a successful claim, you have to prove 4 things:

In most veterinary malpractice cases, the most difficult element to prove is “breach.” That is, that the vet deviated from the professional standard of care.

The bottom line is that to establish a successful veterinary malpractice claim, you’ll need to consult other veterinarians to provide expert testimony that your vet’s actions departed from what the average vet would do in the same situation.

In rare cases, your vet’s actions might be so bad that you won’t need to hire expert witnesses to establish a breach of the professional standard of care. The fancy name for this legal principle is “res ipsa loquitur,” which simply means that the act is so bad that negligence is presumed.

For example, if you bring your dog in for surgery on his right paw and the veterinarian amputates his left paw, res ipsa loquitur would likely apply.

If you sue your veterinarian, you may reach a quick settlement (most likely with the vet’s insurer) or the vet might put up a fight. The most common defenses to a veterinary malpractice lawsuit are:

The traditional computation of damages for the loss of a pet is the market value of the pet. In other words, the amount of money someone else would pay for a pet of the same age, breed, condition, etc.

Understanding that pets are more valuable to their owners than their “market value” reflects, some states have broken away from the traditional computation of damages and have allowed damages for:

In addition, a veterinarian who commits malpractice may face disciplinary action (such as the suspension or loss of their license).

In California, a dog owner sued 2 veterinarians after the death of his 3-year old Labrador retriever. The owner alleged that the veterinarians, over a 4-month period, misdiagnosed the dog’s illness, lied about the dog’s condition, and failed to advise the owner of the treatment risks.

After the trial, the jury awarded the owner $39,000. Importantly, the jury chose to award the owner the intrinsic value of the dog ($39,000), rather than the dog’s fair market value, which was determined to be $10.

You’ll need to weigh the cost of an attorney with the potential cost of litigation to determine whether hiring an attorney to pursue a veterinary malpractice claim makes sense for you.

When it comes to veterinary malpractice cases, attorneys generally work on a contingency fee basis. This means the attorney won’t charge you anything unless they recover damages. Before making a decision, it’s always good to meet with an attorney. Most initial consultations are free and the attorney can help you decide whether your claim is worth pursuing.

If you need help finding an attorney in your area, consult our free online directory.

Have you ever had a bad experience with a vet? Share your story below.