Accident Help (Home) » Injury Blog » I Was Robbed at Gunpoint While Working - What Should My Employer Do to Help Me After the Fact? 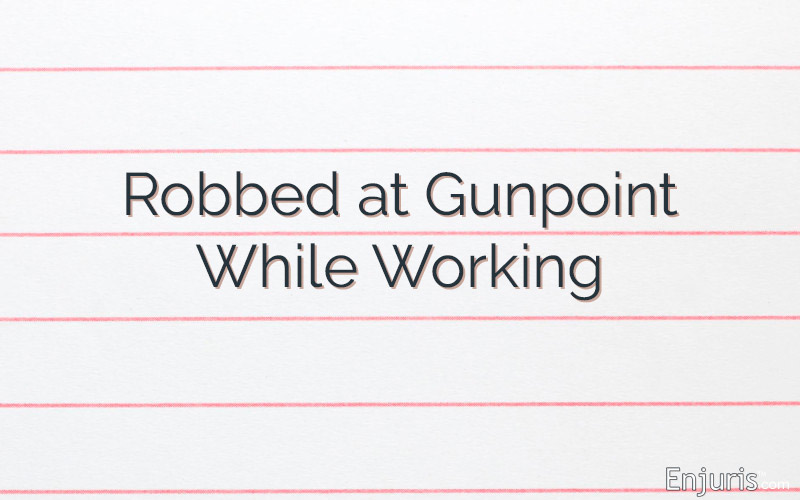 What can I do if someone pulled a gun on me? What is my employer supposed to do?

We recently had a reader reach out with a question. We were unable to contact her to answer her question for her so we are going to post our answer here on the blog, anonymously and with the important details changed.

My son, who works at a gas station, was robbed at gunpoint. His employer didn’t go to his aid and didn’t give him time off afterward. His boss still hasn’t give him time off to process what’s happened. My son wasn’t physically harmed, but since then he’s been going through the motions – he was scared to death! A hospital counselor talked to him, but that didn’t help.

There’s a lot to unpack here. Employees at stores, gas stations, kiosks and other vendors are often the victims of crime. It doesn’t matter what type of crime it is or what level of offense it’s considered – it makes it no less traumatizing for the employee.

People use those words interchangeably, but they do mean very different things. Let’s take a look at the definitions for each so we can figure out what happened in the above scenario.

Theft: Theft is when a criminal steals and nobody is present or not in imminent fear of bodily harm (for example, pickpocketing or someone stealing a shirt from a store).

Robbery: This, on the other hand, is when the criminal puts the person in imminent fear of serious bodily harm or death. This is a felony crime no matter where in the United States you are. This is the difference between someone sneaking into a store and stealing something with nobody noticing (theft) and the criminal in the above scenario barging in with a gun and holding up the store (robbery). Because the letter writer’s son was in fear of his life, it qualifies as a robbery.

Burglary: To commit a burglary, you must enter a structure with the intent to commit a crime therein. This is where you get the phrase “breaking and entering.” However, the breaking doesn’t need to be “breaking” – you could lift a door latch. “Entering” could be just a foot inside the house, like you’re playing the Hokey Pokey. And the crime could be anything, not just theft or robbery.

Now let’s talk about what the employer’s duties were during this scenario. This was obviously a robbery, but unfortunately, you can’t expect your son’s store to be the one store in America that’s figured out crime prevention.

However, your son’s boss did have a duty to mitigate the chance of being targeted as the new Robberies R’ Us. If he failed to do this, your son could possibly file a third-party negligence claim against his employer. This also applies if he works in a high-crime area. The higher the chance of crime, the higher the level of his boss’ responsibility.

Otherwise, he would only be able to claim workers’ compensation benefits for medical bills, out-of-pocket expenses and lost wages. He would not be able to recover for non-economic damages like pain and suffering.

It sounds like your son is definitely suffering emotional distress, and I am sorry for that.

Many psychological traumas occur after an incident like this, and posttraumatic symptoms of anxiety, insomnia, depression and grief are frequent. Mental injuries can be even more crippling than physical injuries, but proving them can be difficult.

Have your son speak with his doctors, have him catalog his symptoms (including psychical symptoms, which can be symptoms of depression), and have him keep track of medications and foods. This is all important information that your son’s attorney will need.

And yes, he does need an attorney. At the very least, have him review the fact pattern with a qualified attorney and ask if there is a viable third party claim against the employer. Try looking through the Enjuris directory if you need more help!

Thank you for reaching out. We hope that your son feels better and is able to put this behind him soon.

Do you have a question about a possible case, too? Tell us your story, too.