Accident Help (Home) » Injury Blog » What Are “No Pay, No Play” Laws, and How Do They Apply to Uninsured Drivers? 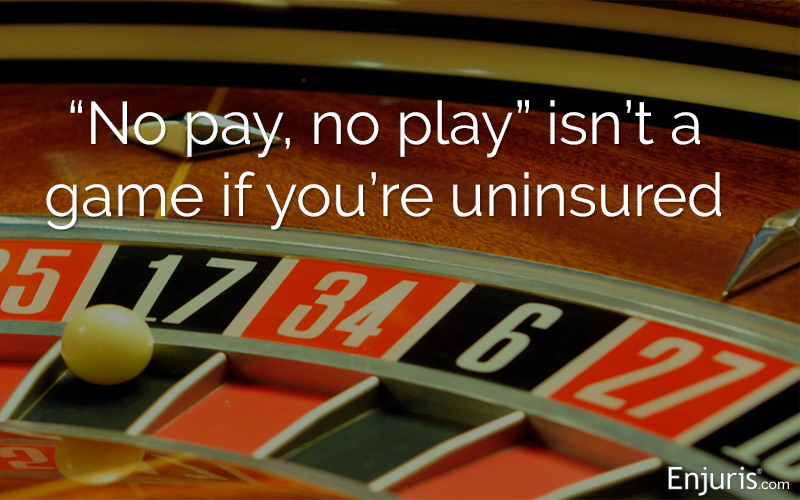 If you’re unfamiliar with this phrase in the context of car insurance law, here’s what it means:

A state with a no pay, no play law does not allow an uninsured motorist to receive compensation after an accident, even if they weren’t at fault.

Table of Contents + show
A state with a no pay, no play law does not allow an uninsured motorist to receive compensation after an accident, even if they weren’t at fault.
What’s the difference between economic and non-economic damages?
How insurance works
Why do states have no pay, no play laws?
Are there other penalties for driving without insurance?
“I was uninsured and had an accident. What do I do now?”

It’s kind of like calling “No fair!” during a game.

If the uninsured motorist wouldn’t be able to compensate another driver after an accident that was their fault, they can’t recover the same if the tables are turned.

What’s the difference between economic and non-economic damages?

Economic damages are those that have a specific monetary cost. They could include medical treatment, property damage, lost wages, and other items that can be quantified and have a set value.

Non-economic damages are those that don’t have specific associated costs. That might be pain and suffering, loss of consortium, emotional distress, or punitive damages.

In general, there are 2 ways insurance could cover injuries in an accident.

If you live in a no-fault insurance state, you would seek compensation from you own insurance company after a car accident, regardless of who is at fault. If you’re the at-fault driver, the injured person would make a claim against their own insurance policy — not yours. However, if the costs for their injuries are above a certain amount, it might be possible for the injured person to claim an amount that’s above their own policy limits from your insurance. If you don’t have insurance to cover it, you could be responsible for paying out of your own pocket.

States that don’t follow the no-fault system are considered tort states. In a tort state, the person who caused the accident is responsible for damages. If you caused an accident and don’t have insurance, you’ll need to pay for damages from your own pocket. If you can’t pay, a court judgment could look at options like liens on your property or garnishing your wages until the damages are paid.

These states currently have a no pay, no play law:

In essence, a no pay, no play law isn’t intended to be punishment or vengeance against an uninsured driver. It’s meant to encourage all drivers to have appropriate insurance and comply with state financial responsibility laws.


Enjuris tip: Although several states have a no pay, no play law, there are variations in how the law is enforced in each state. There are also some other states that have no pay, no play laws in their legislatures currently, but which are not yet the law. It’s important to check the law in the state where you live if you need more information about its no pay, no play law.

Let’s break down how the no pay, no play law works in each of these 11 states.

Why do states have no pay, no play laws?

The intent of these laws is to protect an at-fault driver who complies with the law by purchasing insurance from having to compensate an uninsured driver for non-economic damages.

If you never want to worry about these laws — whether your state has one currently or not — the simple answer is to make sure to purchase the required insurance for your vehicle.

Are there other penalties for driving without insurance?

It’s never a good idea to drive without auto insurance.

Remember: no pay, no play laws are only about your recovering personal injury damages from another driver in an accident. But if you’re found to be driving without valid insurance, you might also be subject to criminal penalties or administrative fines — and they can be steep.

A state law might have a punishment that involves fines of hundreds or thousands of dollars for failure to maintain insurance. You could also be penalized with a suspended or revoked driver’s license.

“I was uninsured and had an accident. What do I do now?”

A personal injury attorney might help, though they’re bound by the laws in your state. Still, they might be able to guide you through finding ways to minimize your costs so you can get back on track after an accident.

You can use the Enjuris Personal Injury Law Firm Directory to find a qualified personal injury lawyer in your state who’s best suited to help with your legal needs.