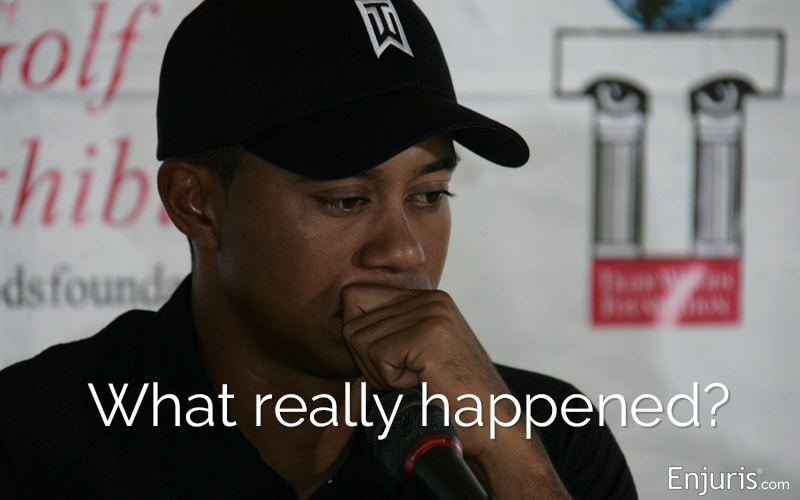 Tiger Woods, widely considered the greatest golfer of all time, recently suffered career-threatening injuries when he was involved in a single-vehicle crash in California.

In this blog post, we’ll look at the details of the crash and why some forensic experts are criticizing the crash investigation. Finally, we’ll look at common causes of single-vehicle crashes and whether or not drivers involved in them can recover damages.

Overview of the Tiger Woods crash

On the morning of February 22, 2021, police received a 9-1-1 call about a crash on Hawthorne Boulevard in Rancho Palos Verdes, California.

When officers arrived at the scene, they found a heavily damaged Genesis GV80 flipped over on its side. Officers quickly identified the sole occupant as Tiger Woods and determined that firefighters should remove him from the vehicle.

The Los Angeles County Fire Department arrived at the scene at 7:28 a.m. and broke the SUV’s windshield using an ax and a pry bar so they could extricate Tiger.

Once he was out of the vehicle, responders determined that Tiger’s injuries were “trauma level, and he was transported via ambulance to Harbor-UCLA Medical Center, the nearest hospital with a trauma center.

Tiger underwent emergency surgery on the same day to treat several serious injuries to his right leg. Specifically, Dr. Anish Mahajan, the acting chief executive of the Harbor-UCLA Medical Center said in a statement that both bones in Tiger’s lower right leg, the tibia and fibula, had been broken in multiple places and were “open fractures,” meaning they pierced his skin. Additional bones in Woods’s ankle and foot were also injured.

The precise cause of Tiger Woods’ crash in Rancho Palos Verdes is not entirely clear.

Data from the vehicle’s black-box recorder showed that Tiger was traveling 84-87 mph in a 45 mph zone when he lost control, crossed a median, hit a curb, and then struck a tree. Investigators estimated that Tiger’s vehicle impacted the tree at 75 mph, at which point the vehicle flipped over and landed in some brush.

“The primary causal factor for this traffic collision was driving at a speed unsafe for the road conditions and the inability to negotiate the curve of the roadway,” said Los Angeles County Sheriff Alex Villanueva.

In California, no person is allowed to drive a vehicle at a speed greater than is reasonable under the circumstances (Vehicle Code Section 22350), and in no case is a person allowed to drive a vehicle along a 2-lane undivided highway at a speed greater than 55 miles per hour (Vehicle Code Section 22349). What’s more, Los Angeles County is allowed to lower the maximum speed limits when appropriate (Los Angeles Municipal Code 15.32.020).

Interestingly, Tiger did not receive a speeding ticket and was not charged with reckless driving. What’s more, police officers didn’t conduct a field sobriety test or obtain a warrant for a blood test.

Although he did not receive a speeding ticket, investigators say Tiger Woods was traveling 42 mph over the speed limit when he crashed into a tree.  Tweet this

One possible reason Tiger did not receive a speeding ticket is that officers didn’t actually witness the crash and the circumstantial data recorder evidence could be challenged in court. For example, it could be argued that the data recorder was programmed improperly or the speedometer in the car was calibrated incorrectly.

“Now, I know there are some saying that somehow [Tiger] received special or preferential treatment of some kind,” Villanueva said. “That is absolutely false.”

It’s less clear, however, why Tiger wasn’t given a field sobriety test.

Forensic experts point to a number of pieces of evidence that they argue should have led officers to administer a field sobriety test. For example, an empty plastic pharmaceutical container with no label was found in a backpack that was resting in the brush next to Woods’ vehicle. What’s more, there were no skid marks (suggesting that Woods did not apply the vehicle’s brakes).

“The data here supports that he was not conscious,” forensic expert Jonathan Cherney said. "I’m seeing the brakes off the entire time. I don’t see any steering at all (until late in the recorded crash sequence). That’s not indicative of emergency steering at all. This is not consistent with somebody who’s awake behind the wheel.”

Had another person been injured in the accident, there would likely be a lawsuit and an additional investigation. Because Tiger was the only person injured, we’ll likely never know exactly what happened before the crash.

Single-vehicle crashes happen for all sorts of reasons. The National Highway Traffic Safety Administration (NHTSA) looked at 15 years worth of single-vehicle collision data in which the vehicle left the roadway and found that the most common crash factors include:

Receiving compensation after a single-vehicle crash

In most single-vehicle crashes (including the crash involving Tiger Woods), the person driving the vehicle is at-fault for the accident and therefore is responsible for the damages. In these cases, the at-fault driver’s insurance may cover their damages under the following policies:

If the driver is not at fault (for example, the crash was caused by a vehicle defect or an object that a construction crew left in the roadway), the driver can file a personal injury lawsuit against the responsible party to recover damages.