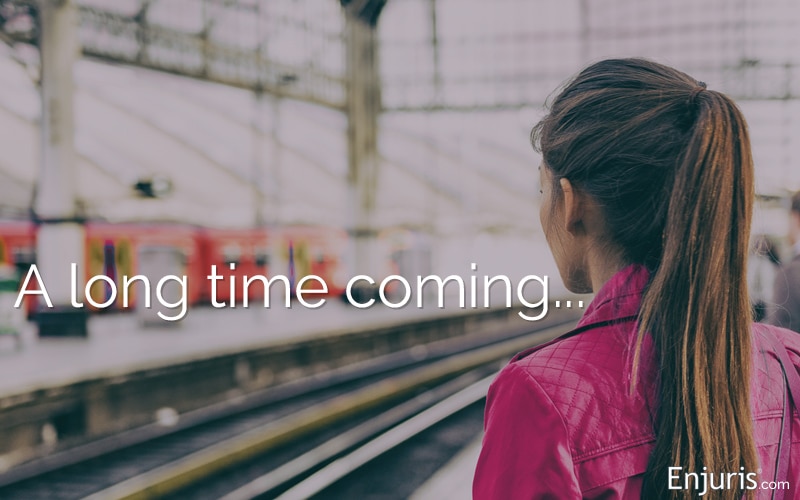 It took almost 5 years, but more than $8 million has been paid by New Jersey Transit to settle 5 lawsuits stemming from the tragic commuter train crash in 2016 that killed 1 person and injured more than 100 others.

Let’s take a look back at the crash, the details of the settlement, and what you should do if you or a loved one has been injured in a train crash.

During rush hour on September 29, 2016, a New Jersey Transit commuter train carrying 250 passengers barreled through the barrier at the end of the track and crashed into a wall of the Hoboken Terminal waiting room.

“I remember thinking, why aren’t we stopping?” said Jamie Weatherhead-Saul, a passenger on the train. “But we just kept going and going, no braking, no nothing.”

The crash killed 1 person and injured more than 100 others. The single casualty was 34-year-old Fabiola Bittar de Kroon, an attorney and mother, who was standing on the platform at the time of the accident and was killed by falling debris.

An investigation conducted by the National Transportation Safety Board (NTSB) and the Federal Railroad Administration (FRA) found that the train was going more than double the speed limit when it crashed. What’s more, the train’s engineer, Thomas Gallagher, accelerated from 8 mph to 21 mph just 38 seconds prior to the crash.

The investigation also revealed that the engineer suffered from undiagnosed sleep apnea. Finally, the NTSB noted that the barrier at the end of the tracks was more than 100 years old and couldn’t provide adequate protection.

More than 30 lawsuits were filed against New Jersey Transit, the Metropolitan Transportation Authority, and the train’s engineer by people who were injured in the train crash, including the husband of Fabiola Bittar de Kroon.

The lawsuits allege, among other things, that New Jersey Transit was negligent for failing to install a positive train control (PTC) system and for failing to discover the engineer’s sleeping disorder.

"NJ Transit has a widespread and systematic failure to properly screen operators for medical conditions, which would increase the likelihood of deadly crashes," one lawsuit alleged.

On June 14, 2021, New Jersey Transit agreed to pay more than $8 million to settle 5 of the lawsuits, including the wrongful death lawsuit filed by the husband of Fabiola Bittar de Kroon.

Although the specific terms of the settlement are confidential, train crash victims can typically recover:

Who can be held liable in a train accident?

Rail companies and their employees owe passengers and bystanders a duty to use reasonable care to avoid causing injury to them or their property.

If this duty is breached and an accident occurs, the injured party can sue for negligence. Depending on the nature of the accident, one or more of the following parties may be responsible:

If more than one party is liable, damages may be divided among the various parties in an amount determined by the judge or jury.

What should you do if you’re involved in a train crash?

The moments following a train crash are understandably chaotic. Your first priority should be your health.

Once you address any physical injuries you may have suffered, take the following steps:

Have you ever been in a train crash or injured on a train?